Note: This article first appeared on the Caucasus Data Blog, a joint effort of CRRC Georgia and OC Media. It was written by Nino Zubashvili, a researcher at CRRC Georgia. The views presented in the article are the author's alone and do not necessarily represent the views of CRRC Georgia or any related entity.

Around half of the public agrees that the wars that Georgia has been involved in since independence show that ethnic and linguistic minorities are a potential security threat for Georgia. But even more, 69%, think that the wars show that the country and population needs to be more tolerant of ethnic minorities. 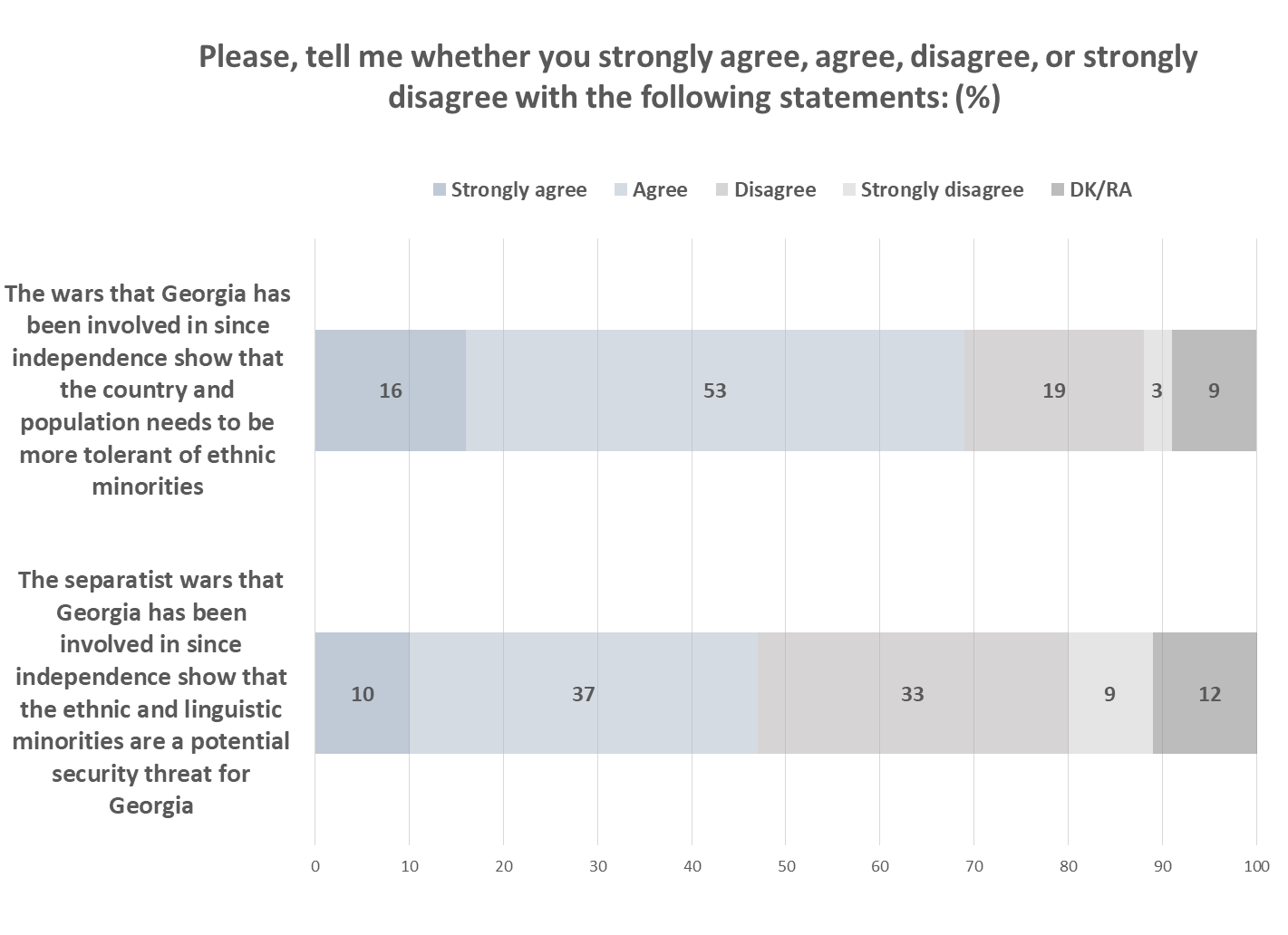 Ethnicity, settlement type, educational attainment, and IDP status are not statistically associated, all else equal.

Quite surprisingly, those that think Georgian citizens should be Orthodox Christians are slightly more likely to see the need for tolerance compared to those who disagree.

Social identification seems to be an important factor. Those for whom being a citizen of Georgia is more important than their ethnic identity are 18 percentage points more likely to see the need for tolerance towards ethnic minorities. 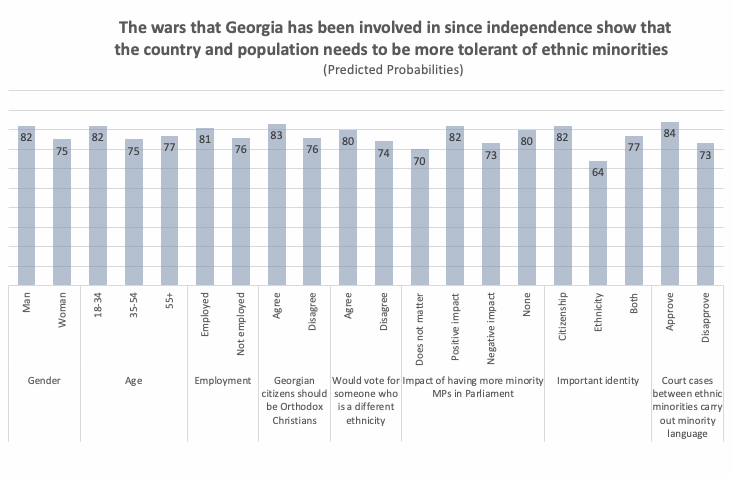 Who thinks minorities are a potential threat?

The factors associated with the belief that ethnic and linguistic minorities are a potential security threat for Georgia are largely similar, with several exceptions. Threat perception increases with age.

Gender, employment status, educational attainment, and being displaced due to previous conflicts in the region are not associated with threat perceptions. 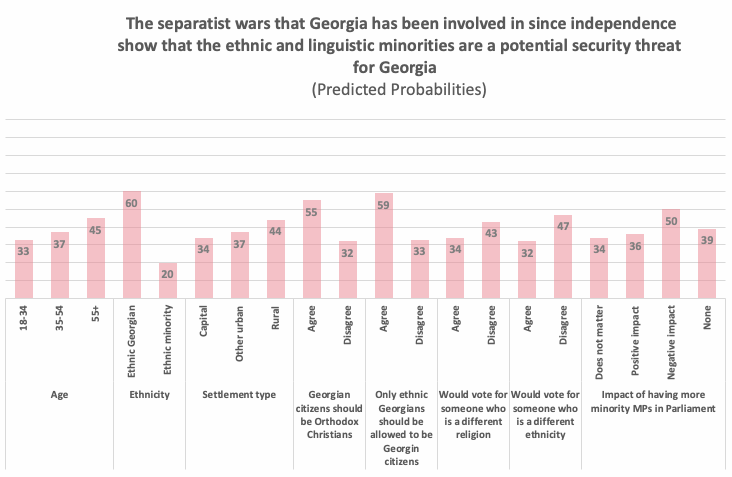 More than half of the Georgian public think that the wars Georgia has gone through show that ethnic and linguistic minorities might be a security threat for Georgia, although even more believe the wars also show a need for tolerance.

Although not self-explanatory in terms of what this says about the Georgian public’s attitudes towards ethnic minorities, these statements are, to a certain extent, associated with ethno-nationalist attitudes.

Identification with one’s ethnic group more than to one’s country is associated with a weaker demand for tolerance. Similarly, those that ascribe ethnicity and religion to citizenship are more likely to view ethnic minorities as a threat. Perspectives on ethnic minorities’ participation in Georgian politics are associated with both perceptions of tolerance and threat.

Georgia’s prominent West-ward political orientation has been demonstrated numerous times, especially in the period following the 2004 Rose Revolution. The signing of the Association Agreement with the European Union in 2014 emphasized once more the country’s willingness for closer cooperation with the EU.
18.07.2014 | პარასკევი

Expectations and the EU Association Agreement

Today's blog post is published in collaboration with civil.ge. One may also read the post on civil.ge here.

On June 27, 2014 Georgia, Moldova, and Ukraine signed EU Association Agreements. In Georgia, the signing has been celebrated as a step towards Euro-Atlantic integration, and a number of events were held in Tbilisi to celebrate the signing. The Association Agreement (AA) itself is wide ranging with some portions pertaining to human rights and the main focus on economic cooperation between the EU and Georgia.
08.09.2014 | ორშაბათი

Is xenophobia on the rise in Georgia?

On September 1, 2014 new rules and regulations came into force for foreigners interested in visiting Georgia. Under the previous visa regime, citizens of 118 countries could stay in Georgia without a visa. Many with visa free travel privileges could receive a visa stamp at the airport that would be valid for 360 days, and simply renew their visa by crossing an international border and returning to Georgia.
29.12.2014 | ორშაბათი

Calling 2014 turbulent for the world seems almost euphemistic. The world witnessed renewed Russian revanchism with the war in Ukraine and annexation of Crimea, the emergence of a highly successful militant Islamic organization, Islamic State in Syria and Iraq, and the persistently tense situation in Israel erupted into another war between Israelis and Palestinians.
27.11.2015 | პარასკევი

Awareness of the EU-Georgia Association Agreement in Georgia, one year on

The June 27, 2014 initialing of the EU-Georgia Association Agreement, a wide reaching, largely economic treaty, was marked with celebration in Tbilisi as the fruit of a long running diplomatic effort to tighten ties with the European Union over the course of three Georgian administrations.
05.04.2011 | სამშაბათი

On March, 30 2011 Archil Gegeshidze and Ivlian Haindrava presented findings on the politics of non-recognition as well as results from a forthcoming study on the de-isolation of Abkhazia. Abkhaz and Georgian researchers compiled their findings after conducting interviews and focus groups analyzing the perceptions of each side.
08.07.2011 | პარასკევი

On July 5, 2011 Georgia adopted a new legislative amendment into the country’s civil code stating that religious minority groups with “historic ties to Georgia” or those defined as religions by members of the Council of Europe can register as legal entities of public law. The initial draft of the law specifically mentioned the Roman Catholic Church, Muslim and Jewish communities, Armenian Apostolic Church and the Evangelical Baptist Church as having “close historic ties with Georgia”. However, the final draft did not specifically name these five groups.
12.06.2012 | სამშაბათი

How justified is it for Georgian women to bear a child or have sex outside of wedlock? Is the Georgian population tolerant towards homosexuals? What are views on issues such as these in the light of the western-oriented political course of the country? How do men and women compare in terms of liberal attitudes? To address these questions, this blog post presents the results from two waves of a nationwide public opinion survey entitled “Knowledge and Attitudes toward the EU in Georgia” conducted by CRRC in 2009 and 2011.
03.03.2008 | ორშაბათი

The earliest books that came out about the Caucasus after the collapse of the Soviet Union were firsthand accounts of events. Now, a second spate of books, which attempt to apply analytical frameworks to the turbulent events that occurred have the breakup of the Soviet Union are beginning to appear.
02.10.2008 | ხუთშაბათი

In Georgia, attention now turns towards sorting out the impact of the short August conflict. How plausible is the reporting we are seeing? Do the journalists get it right?
16.10.2008 | ხუთშაბათი

Institutionalization of Ethnic Communities in Azerbaijan

The Russian community is the most institutionalized ethnic community in Azerbaijan, according to the research of Ilham Abbasov, a CRRC 2007 Fellow. This is due to the quite diverse nature of this community, some support from the kin state, and the demand for the social communication space among mostly urban Russian speaking actors.
12.12.2006 | სამშაბათი

Rusudan Velidze analyzed the living conditions of the Georgian population living in Gali, in Abkhazia. For those unfamiliar with the circumstances, these mostly are (Georgian) Megrelians, and the area is under control of the de facto Abkhaz authorities.
28.11.2016 | ორშაბათი

From the events of May 17th, 2013 when Orthodox priests and their supporters attacked demonstrators at an International Day Against Homophobia rally, to more recently when “sausage-wielding nationalists” attacked a vegan café in Tbilisi, various forms of intolerance have put Georgia into headlines internationally in recent years.
28.11.2016 | ორშაბათი

Georgia is often famed for its hospitality. While the country is more tolerant of other ethnicities, relative to Armenia and Azerbaijan, it has also experienced a rise in nationalist rhetoric and movements in recent years. A number of incidents have also taken place, with hate crime directed towards immigrants and religious and ethnic minorities. This blog post looks at attitudes towards different migrant groups based on a survey experiment in the Caucasus Barometer 2017 survey.
08.04.2019 | ორშაბათი

Integration of ethnic minorities into Georgian society is a significant challenge. As a result of ethnic Armenians and Azerbaijanis’ linguistic separation from ethnic Georgian compatriots, some research suggests their ability to participate in government has been low. Indeed, programming aimed at minority integration in Georgia often focuses on language skills. But, the question remains, how do ethnic minorities that are proficient in Georgian perceive the government? The April 2019 CRRC and NDI data suggest that, while ethnic Armenians that speak Georgian at an advanced level have worse attitudes towards government performance in Georgia, ethnic Azerbaijanis that speak Georgian at an advanced level have better attitudes.
17.09.2019 | სამშაბათი

What divides and what unites Georgian society?

The last year has seen a number of conversations about polarization in Georgia. The President of the European Council, Donald Tusk, even commented on the issue in his Batumi speech.  One of the components of polarization, though not the sole factor, is division in society over actors, issues, and institutions.

While many things could divide the public, what do the people think and which groups report more and fewer sources of division? The April 2019 NDI-CRRC poll suggests that there are fewer perceived reasons for division in rural areas and among ethnic minorities.
28.10.2020 | ოთხშაბათი