As the last two blog posts in this series have described, CRRC-Georgia carried out a randomized control trial on minibus safety. This post reports the results of the experiment, and specifically whether there were immediate effects of being monitored, lasting effects on drivers which were monitored, and whether drivers who were not aware that they were being monitored ended up driving safer as a result of contagion effects i.e. drivers talking to each other about the monitoring. Overall, the results suggest that a small minibus monitoring program is likely to decrease dangerous driving behaviors in Georgia.

Did active knowledge that an individual was being monitored matter? To find out, we compare the control group from the first wave with the treatment group observations from the second wave. The statistical analysis suggests that drivers made 1.4 fewer calls per trip, smoked 1.5 fewer cigarettes, made 2.2 fewer illegal passes, and 2 fewer aggressive maneuvers on average. Overall, in the group that was directly aware that it was being monitored, there were 7.2 fewer incidents on average per trip. Other measures such as speed and seat belt non-use did not decline or increase in a statistically significant manner.

Based on these statistics we can conclude that direct knowledge of being monitored lead to fewer distracted and other dangerous driving behaviors. However, did these effects last? To understand whether direct knowledge of being monitored and that one would again be monitored had a lasting effect, we compare the results of the drivers who knew they were being monitored to roughly two weeks later when they did not know they were being monitored. In this case, a lasting effect is present if there was a statistically significant decline in a behavior in the first round of monitoring, and no significant change in the second round of monitoring.

Data analysis suggests that drivers who knew they would be monitored maintained lower levels of smoking, telephone conversations, illegal passing, aggressive maneuvers, and number of incidents overall. However, it is important to note that the drivers did drive less safely than they did when they were aware of being monitored. The differences between waves are however not statistically significant, suggesting that drivers did in fact drive safer roughly two weeks after being aware that they were being observed and would be again.

When it comes to contagion, the results of the statistical tests uniformly show no significant change except for in speed. Given that this is one in ten tests and that there was no significant effect from the first wave of monitoring on speed, we suspect that this test may have been found to be significant based on chance or other extraneous factors. 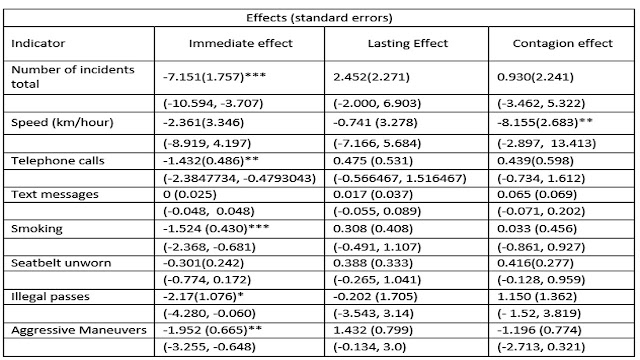 Based on the above statistics we can conclude that direct knowledge of being monitored led to fewer distracted and other dangerous driving behaviors. However, the combination of the lack of significant contagion effect in combination with the increased but not significant increase between treatment groups suggests that a comparison of descriptive statistics is important to gain a sense of whether there was a lasting effect. The table below shows the average of each indicator given above in each group of the experiment. 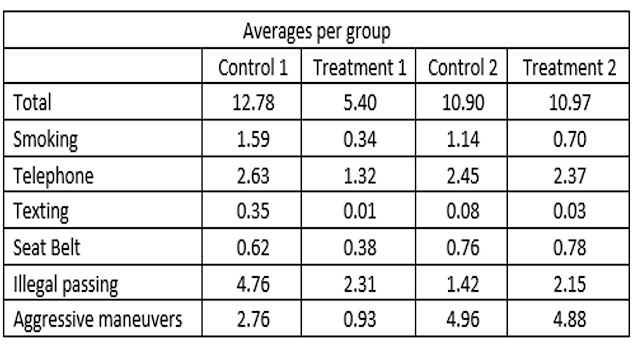 The average indicator for the third wave of treatment and control group observations are quite similar. The similarity between means suggests one of two things. First, there may have been a small contagion effect since the levels are lower than in the first round control as well as a lasting effect that was not statistically significant. Supporting this conclusion is that both second wave means are lower than the mean in the first observation of the control group. The second possibility, however, is a lack of lasting effect and that an external factor caused the lowering of indicators during the third wave of observation.

Overall, the results of the experiment suggest that direct knowledge of being observed lowers the number of dangerous and distracted driving behaviors by a significant amount. This experience may have a lasting effect on drivers. What does this mean for the policy we proposed in the previous post, and what can the government do based on this information? In the next post, we provide recommendations for the government based on the information presented in this post.
Tweet