The presence of Internally Displaced Persons (IDPs) within Georgia is testimony to its internal and cross-border conflicts. IDPs often face a life in limbo, unable to return to their homes and reliant on friends, family and the generosity of strangers to get by. To address this issue, and also in fulfillment of obligations to the Council of Europe, Georgia has developed policies on the integration and rehabilitation of IDPs.
As of January 2011, UNHCR-Georgia estimates that approximately 359,716 IDPs continue to live in Georgia proper. Preliminary survey results from the 2011 Caucasus Barometer show that Georgian attitudes towards IDPs are generally positive. More than half of Georgians support government assistance for IDPs, and view IDPs as part of Georgian society.
Results indicate that Georgians would like to see an increase in government assistance. 57% of Georgians say that the current level of assistance is not enough, while 18% claim it is. 22% of Georgians do not know if the current level of government assistance is meeting the needs of IDPs and only 2% consider the current policy of assistance to be excessive. 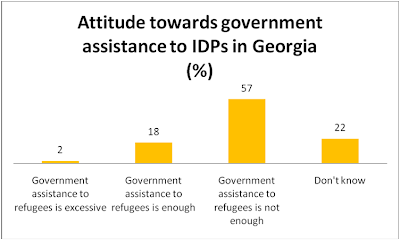 The survey refers to all IDPs in Georgia, not only those from Abkhazia or the Tskhinvali region of South Ossetia.

Over half of Georgians (61%) consider IDPs to be part of Georgian society. In addition 53% of Georgians disagree with the statement that, “IDPs are different from Georgia’s society”. 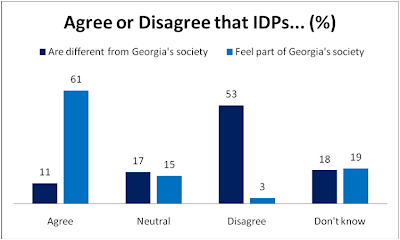 Data was recoded from a 5 to 3 point scale and the scale was reversed.The original scale comprised of strongly disagree=1, somewhat disagree=2, neutral=3, somewhat agree=4 and strongly agree=5.

On the whole, results indicate that Georgian attitudes towards IDPs are supportive. For those with further interest in the question, various crosstabulations should be of interest once the dataset is released. Also, click here for previous research CRRC has done on this topic.
This is only a quick preview of the results from the 2011 Caucasus Barometer, keep checking back for more information and the upcoming release of our results on ODA!
Tweet
25.02.2014 | სამშაბათი

The Olympics in Sochi, Russia, took place about 30 kilometers from Russia’s border with the separatist region of Abkhazia in Georgia. As a security precaution, the Russian government has temporarily moved its border 11 kilometers into Abkhazia to create a “security zone,” at which travelers entering will have to show identification before proceeding to the actual border with Russia.
14.07.2014 | ორშაბათი

When is a war not a war?

When is a war not a war? While it may seem commonsensical that a country cannot simultaneously be at war and at peace, the prevalence of several ‘frozen conflicts’ in the post-Soviet space defies simple categorization. If we take the conflict between Georgia and Abkhazia or South Ossetia as an example, a quick internet search shows that there was a five-day war in 2008 that ended on the 12th of August with a preliminary ceasefire agreement.
17.03.2011 | ხუთშაბათი

IDPs in Georgia – Attitudes towards return, conflict resolution and justice

Under which conditions would IDPs be willing to return to Abkhazia? Should past injustices be addressed or left alone? What do IDPs consider the main reasons for the outbreak of the war in the early 1990s? The research project “IDPs in Georgia”, conducted by CRRC for Conciliation Resource (CR) with the financial support of the European Commission’s Instrument for Stability, provide insight to these questions and many more.
21.03.2011 | ორშაბათი

Georgians on Abkhazia: What Is to Be Done?

One of the previous CRRC blogs discussed some results from CRRC’s recent survey called “IDPs in Georgia” which gauged the opinions and attitudes of IDPs displaced from Abkhazia during the 1992-1993 conflict towards return, conflict resolution and justice. CRRC’s annual survey, the Caucasus Barometer (2010) also included a series of questions on Georgia-Abkhazia relations asked to the non-IDP population of Georgia.
05.04.2011 | სამშაბათი

On March, 30 2011 Archil Gegeshidze and Ivlian Haindrava presented findings on the politics of non-recognition as well as results from a forthcoming study on the de-isolation of Abkhazia. Abkhaz and Georgian researchers compiled their findings after conducting interviews and focus groups analyzing the perceptions of each side.
05.05.2011 | ხუთშაბათი

In March, Conciliation Resources (C-R) has published a report on IDP attitudes to conflict, return and justice, which we have already highlighted in a previous blog-post. As you may recall, this report was based on a survey of IDPs which CRRC undertook for C-R in the summer of 2010.
25.07.2011 | ორშაბათი

The Abkhaz and South Ossetian conflicts did not emerge in the 2008 August war. However, they escalated in the early 1990’s when both territories engaged in wars of secession and there are different approaches to the resolution of these conflicts. For the EU, these are regional issues with broad security implications.
12.09.2011 | ორშაბათი

Does Refusal to Recognize Elections in Abkhazia Reduce Prospects for Resolution?

A recent New York Times article argues that the failure of Western governments to recognize the latest presidential elections in Abkhazia on August 26, 2011 may hamper conflict resolution. According to the authors, Cooley and Mitchell, Western governments have a “counterproductive disdain” of developments in Abkhazia and isolating Sukhumi will reduce prospects for conflict resolution.
21.09.2011 | ოთხშაბათი

Isolation and Opportunity in Eastern Abkhazia. A Survey of Community Security

The Institute for Democracy and Saferworld recently published a report entitled “Isolation and Opportunity in Eastern Abkhazia. A Survey of Community Security” (2011). This blog focuses on four aspects from the report: most urgent problems facing communities in Eastern Abkhazia, perceptions of personal safety and the role of security actors, potential increased tension, and contact between ethnic groups.
18.01.2010 | ორშაბათი

What do Georgians think about Russia? What relationship would they like to have with their northern neighbor? And what do they think about the August conflict? Our data allows a nuanced answer to these questions: although Georgians have a very critical view of Russia’s role in the August conflict, they continue to desire a good political relationship with their northern neighbor, as long as this is not at the expense of close ties with the West.
19.11.2010 | პარასკევი

Ambassador Dieter Boden, a distinguished German diplomat who has served both as German Ambassador to the OSCE as well as UN Special Representative to the Secretary General, spoke at the Europe House about conflict resolution in the disputed territories of Abkhazia and South Ossetia.
22.07.2008 | სამშაბათი

Caucasus Data: Tolerance towards Others

The CRRC Data Initiative (DI) gives people an opportunity to do interesting cross-country comparisons of the South Caucasus (SC) people’s attitude toward their neighbors. This subject is quite sensitive and complex when thinking of the fact that the SC stands out for its sequence of ethnic conflicts.
20.08.2008 | ოთხშაბათი

On July 29, just before the tensions in around South Ossetia began to escalate, Alexander Rondeli gave a talk at the Tbilisi Summer Seminars, a weekly lecture series which we were organizing with GFSIS and American Councils. Alexander Rondeli runs the Georgian Foundation for Strategic and International Studies (which he also set up), has the rank of an ambassador, works closely with the Georgian government, and teaches International Relations.
01.09.2008 | ორშაბათი

In the current situation, one issue facing Georgia is what to do with and for the Internally Displaced People (IDPs) that are now coming from South Ossetia and the Kodori Gorge, in Upper Abkhazia. A friend with significant experience in development work posted a candid analysis in an e-mail group. We thought that the analysis is worth sharing since this issue affects the region.
17.09.2008 | ოთხშაბათი

What do Russians think about the situation in Abkhazia and South Ossetia? -- Data Snapshot

How do urban Russians view the conflicts in South Ossetia and Abkhazia? From September, 5th-8th, 2008 the Analytical Center of Yuri Levada conducted a survey in ten big cities of the Russian Federation, interviewing 1000 Russian respondents. We have translated the results into English here, as they are only available in the original Russian on the Levada website.
26.09.2008 | პარასკევი

And here is an update on Russian views, made available by the Levada Center on the 22nd of September. As previously stated, this indicates that Russian public opinion generally supports the government's course.
12.12.2006 | სამშაბათი

Rusudan Velidze analyzed the living conditions of the Georgian population living in Gali, in Abkhazia. For those unfamiliar with the circumstances, these mostly are (Georgian) Megrelians, and the area is under control of the de facto Abkhaz authorities.
26.09.2007 | ოთხშაბათი

The Urban Institute, with the help of IPM, just finished a summative survey of their "Georgia IDP Voucher Program," funded by the US State Bureau of Population, Refugees and Migration. (N.B. a voucher is a promised subsidy towards the cost of purchasing a home).
30.10.2017 | ორშაბათი

As much as 81% of the population of Georgia doesn’t know what the European Union Monitoring Mission (EUMM) does, according to the 2017 Knowledge of and Attitudes towards the European Union in Georgia survey funded by Europe Foundation and implemented by CRRC-Georgia. This lack of knowledge has increased over time, as has the prevalence of incorrect information about the EUMM’s mission. This represents a missed opportunity for the EU’s communications in Georgia.
23.12.2019 | ორშაბათი

Who believes Georgia will regain its territorial integrity?

Territorial integrity is frequently cited by Georgians as one of the most important national issues, but the relative salience of Georgia’s territorial conflicts has declined since the 2008 Georgian-Russian war. Evidence from the 2013 Caucasus Barometer suggests that there is a high level of uncertainty about when or if the conflicts will be resolved and that there is little public support for any type of settlement involving less than the full restoration of Georgia’s territorial integrity (such as high levels of autonomy for Abkhazia or a confederation state).