On a 2016 CRRC survey conducted for Transparency International Georgia (TIG), one in four adults in Georgia reported taking either antidepressants or antibiotics without a doctor’s prescription during the 12 months before the survey. Self-medication with anti-depressants can cause serious problems. While anti-depressants may have side-effects even when taken under the supervision of a physician, the risks are higher without a doctor’s care. Self-medication with antibiotics is also problematic. If taken improperly, they can contribute to the creation of antibiotic-resistant bacteria, which is often thought to be one of the world’s most pressing health problems. Surely, when a quarter of the population reports taking these types of drugs without the supervision of a physician, it represents a public health concern, one of many in Georgia. Current regulations clearly fail to prevent such practices. This blog post looks at which groups in the population report more often taking antidepressants or antibiotics to self-medicate. 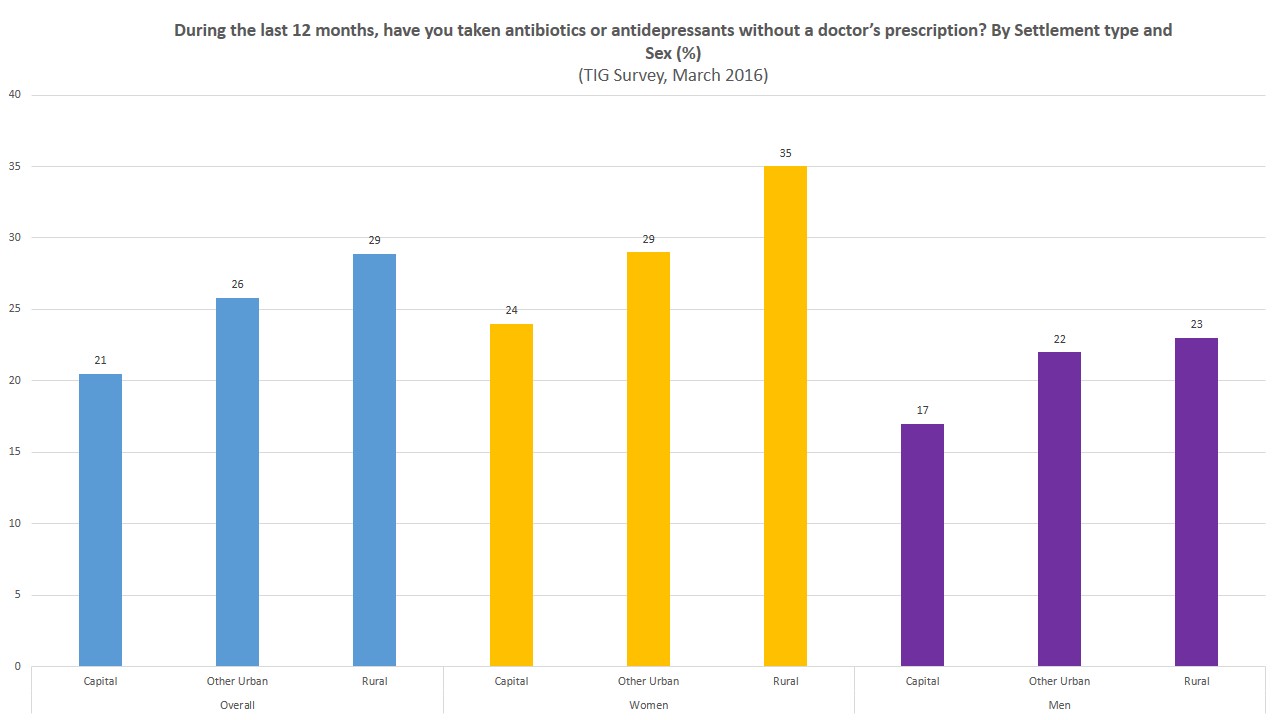 Note: Only the shares of those answering “Yes” are shown on the charts in this blog post.

At first glance, the older population (56 and older) in general appears more likely to take anti-depressants and antibiotics without a doctor’s prescription. Similar to the finding with settlement types, men of different ages are equally likely to do so, while women who are 36 years old or older report to be doing so most often.

With the use of antibiotics and antidepressants, a doctor’s supervision is particularly important. Many in Georgia still take such drugs without it, and the practice is more common among women than men. In order to begin to deal with this issue, the government of Georgia, and, in particular, the Ministry of Labor, Health and Social Affairs, as well as civil society organizations should increase awareness of the problems associated with self-medication with anti-depressants and antibiotics, especially among women.

The data which this blog post reports on will soon be available at our Online Data Analysis tool, and is currently available for download here.
Tweet