Trends in the data: Changes in Employment Sector and Type of Employment in Georgia

According to CRRC’s Caucasus Barometer (CB) surveys from 2008 to 2015, the self-reported employment rate is rather stable in Georgia – approximately 35%. This blog post looks at the trends in CB data on primary employment sector and type of primary workplace. Throughout the post, only the answers of those who reported being employed – slightly above a third of the population – are analyzed. 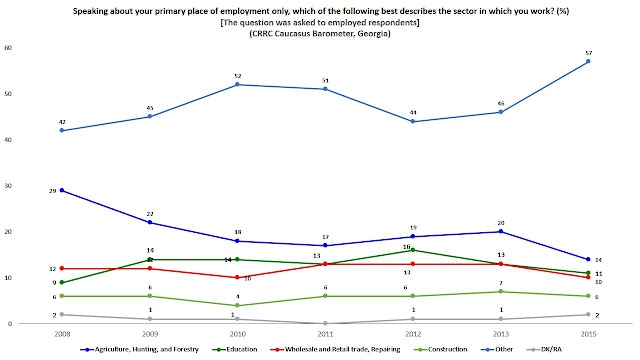 Note: In addition to actual responses of “Other”, several other options of low frequency are also included in this category on the chart above. That is, category “Other” in this chart includes responses “Healthcare and Social work”, “Financial Intermediation and Banking”, “Hotels, Restaurants, Cafes”, “Manufacturing”, “Transport and Storage”, “Electricity, Gas, and Water Supply” and “Mining and Quarrying”.

A similar downward trend is observed between 2008 and 2015 in the share of employees who reported “owning a business without employees.” While in 2008, this share was about a third of those who were employed, roughly equal to those employed by state organizations, it decreased to 21% in 2015.

Although these two findings are not necessarily related, they show interesting trends in the employment situation in Georgia. Fewer people report working in the agriculture, hunting, and forestry sector, and fewer people report being sole proprietors than in the past. Both these trends suggest that the composition of the Georgian labor market may be shifting, and both call for further and thorough analysis.

Connections or education? On the most important factors for getting a good job in Georgia

What is believed to be the most important factor for getting a good job in a country where unemployment is widely considered to be one of the biggest issues? CRRC’s 2013 Caucasus Barometer (CB) survey results show that connections (30%) and education (28%) are the most frequent answers to this question in Georgia.
24.01.2013 | Thursday

In August 2012 CRRC launched the study of Georgia’s Workforce Development system, commissioned by the World Bank. Document review and key informant interviews have been used as main research methods in this study. On 19th of December, the World Bank office in Tbilisi hosted a workshop which aimed at presenting and validating the preliminary finding...
19.01.2015 | Monday

Taxi drivers tell perhaps the most telling story of Georgia’s economic transition. They often complain that the transition made their high social status useless, thus pushing them into taxi driving. This often heard and mocked complaint highlights the contrast between what is expected from and what is delivered by the labor market. This blog post shows that the taxi drivers are not entirely wrong.
22.01.2015 | Thursday

A taxi driver’s tale, Part 2: The poverty of social status in Georgia

This blog post examines how social status is associated with individual and household well-being
29.09.2014 | Monday

Optimism abounds with regards to the recently signed Georgia-European Union Association Agreement (AA). Most Georgians, however, lack information about the EU and its relation to the country, including the details of the agreement which directly concern the future of Georgia’s economy. The AA covers many areas including national security, migration, human rights and the rule of law but is primarily a free trade agreement with potentially major implications for employment.
13.10.2014 | Monday

Georgia and the EU’s Economic Woes

Why hasn’t the economic crisis in Europe deterred Georgia’s desire to join the European Union? The majority of Georgians (and the Georgian government) want to join the EU despite crisis in the Eurozone. Yet, the continued crisis, including the Eurogroup’s recent (and second) rescue of Greece’s economy and Hungary’s harsh austerity measures, illustrates that the crisis is not isolated to the Eurozone.
09.10.2008 | Thursday

Unemployment clearly is one of the pressing issues in the South Caucasus. But there is a lack of reliable data on people being without and looking for a job. This blog, based on CRRC’s Data Initiative 2007, provides a snapshot on these numbers.
09.11.2006 | Thursday

Labor Snapshot - how does one live?

One of the key problems in post-Soviet higher education is that it does not prepare graduates for the labor market. Studying the situation in Azerbaijan, Firdovsi Rzayev argues that one of the reasons for this is that there is no link between higher education and employers.
13.12.2006 | Wednesday

Labor Migrants Who Returned to Georgia

Mariam Sakevarishvili analyzed the life of labor migrants returning to Georgia. She combined CRRC 2004 Data Initiative findings with 50 interviews across Georgia (conducted in 2005). The interviews very much replicated the findings from the Data Initiative: prior to emigration 37% of respondents did not have adequate income; 31% were unemployed; 16% cited personal reasons for migration.
12.02.2018 | Monday

What factors help to land a good job? Views in Armenia and Georgia

What are the factors that help one get a good job? The question is important around the world, and arguably even more important in countries with high reported unemployment, like Georgia and Armenia. While it would require an in-depth study of the labor market of a given country to find out what actually helps a person get a good job, what people think about this issue is also interesting. CRRC’s 2017 Caucasus Barometer (CB) survey asked the population of Armenia and Georgia which factors where important for getting a good job in their country.
20.05.2019 | Monday

Grit among young people in Georgia

Angela Duckworth’s concept grit has gained a great deal of attention in recent years. Grit, described as some combination of perseverance and passion, has gained this attention, because the data suggest it is associated with a number of positive outcomes like employment and completion of education. In 2018, CRRC-Georgia measured the grit of over 2500 young people (15-35) within a baseline evaluation for World Vision’s SAY YES Skills for Jobs project (funded by the European Union within EU4YOUTH program) which is taking place in Mtskheta, Akhaltsikhe, Adigeni, Kutaisi, Zestaponi, Bagdati, Senaki, and Zugdidi. The data suggest that grit is good predictor of positive outcomes in Georgia as is it is in other contexts.
23.03.2020 | Monday

Know English and how to use a computer?

A slightly jeering expression in Georgia when speaking about employment prospects suggests that to get a job, you need to know English and how to use computers. Data from Caucasus Barometer 2019 shows there’s a bit of truth in the jest.