New Year's twice, even if you don't believe in Santa

December. Cold. Christmas decorations in the streets. New Year. Champagne. Satsivi and Gozinaki. Presents. Santa Claus. December 25. Or January 6? Then New Year’s once again, but the old one. 2017 resolutions and the wish on New Year’s Eve that is bound to come true.

What are the population of Georgia’s New Year’s plans? CRRC-Georgia asked on December 1-13 in a phone survey of adults in Georgia. Unsurprisingly, people in Georgia follow established traditions. A large majority (73%) plan to ring in the New Year at home. Nine per cent more will meet it in a friend’s or relative’s home. Meeting the New Year outside in the street or in a restaurant and café is not yet common, and only one per cent of Georgians plan to. Another 15% had not decided in the first half of December where they would celebrate the New Year.

Since a large majority of people celebrate New Year’s at home, holiday decorations are important. Only 4% of the population does not plan to have a Christmas tree. A large majority (76%) will have an artificial tree and about one tenth (13%) a natural tree. Meanwhile, 59% of people also plan to have Chichilaki at home.

Traditionally, one of the main components of New Year’s celebrations is the New Year’s feast. Of the dishes from the New Year’s table, over one third (38%) of Georgia’s adult population singles out Satsivi, about a fourth (24%) Gozinaki and about one tenth (9%) fried suckling pig as their favorite. 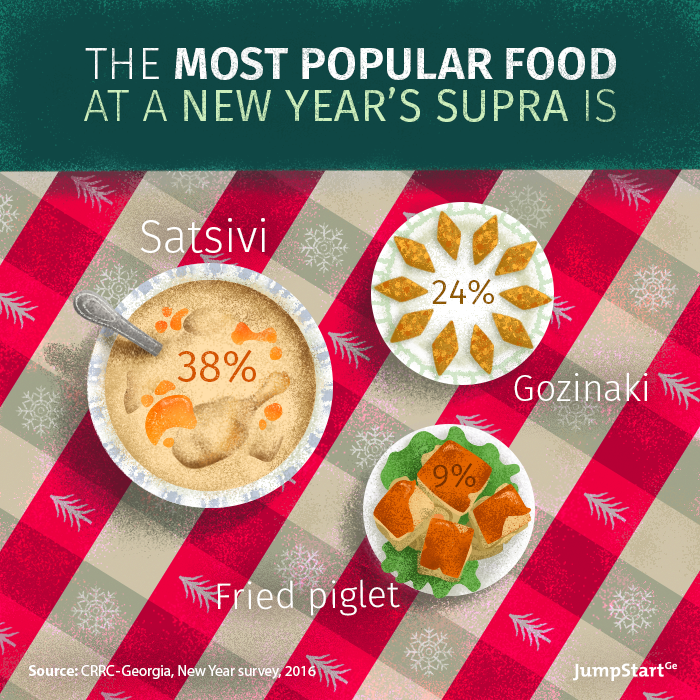 For many, New Year’s is associated with presents. About two thirds of Georgia’s population (62%) plan to buy presents for family members. Some people used to believe or still believe that presents come from Santa (Tovlis Babu). It appears that about one third of Georgia’s adult population believed in Santa through the age of 10. However, almost one fourth (24%) never believed in Santa. Despite this, the magic of New Year’s Eve is not lost on the majority. Two thirds of the Georgian population (66%) have made a wish on New Year’s.

New Year’s, with its feast, Christmas tree and fireworks, is celebrated twice in Georgia. An absolute majority of people (88%) say they celebrate the Old New Year as well as well as the new one. People also seem to be interested in the Chinese calendar and closely follow which animal is the symbol of the coming year. A majority of Georgians (68%) plan to or already have bought a rooster souvenir for 2017, the year of the rooster.

Having holidays twice is not so uncommon in Georgia after all.