High Abortion Rates vs. Conservative Views against Abortion in the South Caucasus

There is a tension in the South Caucasus between high rates of abortion (and sex-selective abortion) and overwhelmingly conservative attitudes against it. Abortion rates in Georgia and Armenia are higher than the EU average and the rate in Azerbaijan is below. A 2010 article by the Economist placed Armenia, Azerbaijan and Georgia 2nd, 3rd and 4th, respectively, on a list of countries worldwide where the numbers of girls are off balance at birth - China ranks first. This blog aims to explore attitudes towards abortion and gender in the South Caucasus, and shows that while there are widespread conservative attitudes against abortion, it remains frequently carried out.
Data from 2010 World Health Organization (WHO) report on abortion rates show that there are more abortions among women of reproductive age (15-44 years) in Georgia and Armenia relative to the average in the European Union (See chart below). The abortion rates in the South Caucasus region also vary considerably; the number of abortions per 1,000 live births is lower than the EU average (222) in Azerbaijan (162), whereas it stands at 274 in Armenia, and 408 in Georgia. 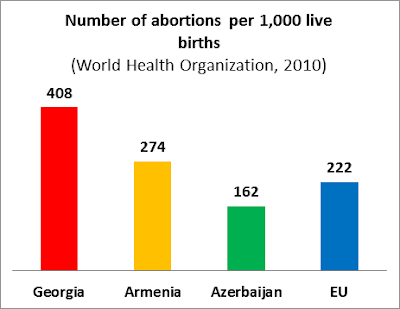 The high rate of abortion in the South Caucasus is also linked to sex-selective abortion, whereby pregnancies are terminated if the fetus is female. Male newborns outnumber females by more than 10% in the South Caucasus. For every 100 girls, there are 112 boys in Armenia, 114 boys in Azerbaijan, and 111 in Georgia according to the 2011 CIA World Factbook. Additionally, in 2011 the European Commission declared that “Prenatal sex selection is to be condemned as a phenomenon which finds its roots in a culture of gender inequality”. Thus, the sex-selective abortion problem in the South Caucasus may be a consequence of a greater cultural issue. Another considerable factor is the lower number of children that families in the South Caucasus have over time. For example, in the mid-sixties each family had 3 children on average in Georgia, 4 in Armenia and 5 in Azerbaijan, whereas, according to the 2012 World Factbook, the average number of children per family is now 1.46 in Georgia, 1.38 in Armenia, and 1.92 in Azerbaijan. With a choice of 1 to 2 children, many families in the South Caucasus prefer to have a boy instead.
Data from the 2010 CB also shows that people of both genders are more likely to say they prefer a son. Men in Georgia and Armenia indicate the greatest preference to have a male child (approximately 60%), whereas one third (33%) of Azerbaijani men agree. CB data also indicates that the gender of a child matters least in Azerbaijan and most in Armenia, whereas in all three countries men are more likely than women to say that they want a boy. 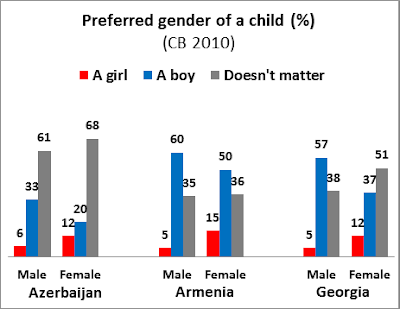 Yet, despite the high rate of abortions, and specifically sex-selective abortions, the CB 2011 shows that attitudes towards abortion in these countries remain very conservative. Well over half of the Georgian (76%) and Armenian (61%) populations believe that abortion can “never be justified” (This question was measured on a 1-5 scale where 1 =”never justified”, 5=”always justified”. The question was not asked in Azerbaijan).
Moreover, the high rates of abortion are puzzling in these countries where the majority of the population says religion is important in daily life (92% in Georgia, 92% in Armenia and 80% in Azerbaijan according to the CB 2012), and where trusted religious authoritative bodies (i.e. Georgian Orthodox Church in Georgia, Armenian Apostolic Church in Armenia, and both Shia and Sunni Islamic Organizations in Azerbaijan) consistently advocate against abortion.
How can we explain these conservative attitudes against abortion along with the high rate of abortion in the South Caucasus? Is it a familiarity with abortion as a method of contraception from the Soviet Union, the availability of sex-selective technology, cultural attitudes, or something else? What do you think?