Bela Tsipuria on the Post-Colonial Aspect of Georgian Literature

In a recent W-i-P seminar, Bela Tsipuria, now Professor at Ilia State University, and previously Deputy Minister of Education and Science, made a compelling case for understanding Georgian literature as a post-colonial phenomenon. Here is a summary of the talk to inspire readers to follow up, even if its brevity will not do full justice to the nuance of the talk.
Georgia is not always described as a classical colony, as it was closely intertwined with Russian and later Soviet elites. Yet, as Tsipuria argues, Georgia had many of the key features of a colony. It lacked sovereignty, had no borders, was administered by a significant non-Georgian elite, with politics and even culture dominated by an Imperial center. 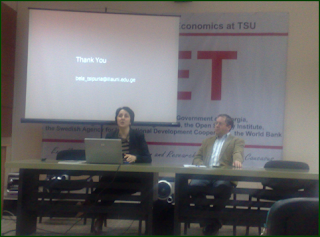 Georgian culture and literature thus developed in response to this colonialism, that arrived at the same time as modernity. As the state could not develop Georgian identity, it was left to culture to define Georgia -- thus the central role of writers, as reflected in street names in cities throughout Georgia. According to Tsipuria, the debate to which extent the state can be trusted to take the lead in society, continues. Eventually Russia became a liminal space, on the side, as Georgians tried to define themselves toward a European vision of modernity, under the theme of "relocating Georgia".
Briefly modernists defined their own space in the First Georgian Republic, as a cultural oasis, bringing together Georgian, Russian, Armenian and even Polish avantgardists. This glimpse of free modernism was post-colonial in various ways, in its assertion of experimentation and freedom. Yet this moment was snuffed out quickly with the Soviet take-over. Seeking to assert its own artistic vision, the Soviet Empire centralized cultural production, suggesting and even enforcing its approach, duplicating via mimicry, and marginalizing alternatives.
The symbolists tried to fight back. Tsipuria highlights how some of the artists used the facade of Socialist Realism to introduce their own national and modernist symbols. While much of that spirit was purged in the 1930s, a double narrative came back after the Second World War, that was both Soviet and personal, characterized by ambivalence. The double narrative created a rich texture, and creative tension, but also, Tsipuria said, created a double discourse, some of which still creates challenges for current debates in the country, in "how to manage the reality that the new freedom grants".
Interested in attending or even presenting in these sessions? The easiest way is to join the Works-in-Progress group on Facebook.
Tweet