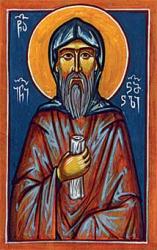 WiP: Features of Ioane Petritsi's commented translation of Proclus'
CRRC, American Councils and ARISC are proud to present the 9th talk of the Works-in-Progress Series for the Fall 2012 Season!
Levan Gigineishvili"Features of Ioane Petritsi's commented translation of Proclus' 'Elements of Theology'"
Wednesday, November 14, 2012 at 6:15pmISET/CRRC Georgia, Zandukeli St. 16, Tbilisi, GEORGIA
Ioane Petritsi translated Proclus' "Elements of Theology" in 12th century, which makes him the first ever translator of this singularly important work of Neoplatonic Philosophy. Moreover, since all the extant manuscripts of Proclus' mentioned treatise date earliest from the end of 13th century, Petritsi's translation gives an oblique access to the oldest Greek manuscript and can be used for establishment of the most reliable readings. However, this should be taken with caution, for Petritsi's translation reveals few important idiosyncratism and peculiarities, some of which sprout from his philosophical, others from his religious background. At the presentation Levan Gigineishvili will discuss importance of Petritsi's translation and its peculiar features.
Levan Gigineishvili is a PhD graduate of the Medieval Studies Department of the Central European University, Budapest, Hungary. Besides, he has graduated Classics department of the Ivane Javakhishvili State University; Institute of Philosophy of the Catholic University of Leuven and Graduate School of Education of Harvard University. His PhD thesis “The Platonic Theology of Ioane Petritsi”, that was later transformed into a monograph (published in 2007 by the Gorgias Press), is the first work exposing comprehensively Petritsi’s philosophy to the English-speaking audience. He is an author of numerous scholarly articles and participant of international conferences related to Neoplatonic studies. Recently he is an associate professor at the Ilia State University and a teacher of History of Philosophy and Georgian literature at the Givi Zaldastanishvili American Academy in Tbilisi.
********
W-i-P is an ongoing academic discussion series based in Tbilisi, Georgia, that takes place at the International School of Economics (ISET) building (16 Zandukeli Street). It is co-organized by the Caucasus Research Resource Centers (CRRC), the American Councils for International Education: ACTR/ACCELS, and the American Research Institute of the South Caucasus (ARISC). All of the talks are free and open to the public.The purpose of the W-i-P series is to provide support and productive criticism to those researching and developing academic projects pertaining the Caucasus region.Would you like to present at one of the W-i-P sessions? Send an e-mail to natia@crrccenters.org.
Tweet