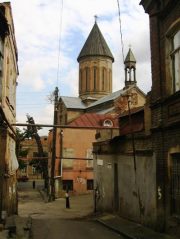 WiP: Integrated Conservation: Heritage Management and Urban Planning in Tbilisi, Tbilisi, Georgia, November 28 – Angela Wheeler (ENG)
CRRC, American Councils and ARISC are proud to present the 10th talk of the Works-in-Progress Series for the Fall 2012 Season!
Angela Wheeler"Integrated Conservation: Heritage Management and Urban Planning in Tbilisi"
Wednesday, November 28, 2012 at 6:15pmISET/CRRC Georgia, Zandukeli St. 16, Tbilisi, GEORGIA
The future of Old Tbilisi's architectural heritage has become an increasingly contentious subject of public debate in recent years. While many residents lament the destruction of historic landmarks like the iconic Lermontov House, others argue that the dilapidated old buildings only hinder Tbilisi's economic growth. This presentation will examine how the rehabilitation of architectural heritage should be a key element in urban economic development, rather than an opponent of it. Angela will review international standards for architectural rehabilitation, the unique challenges presented by Tbilisi's architecture and social/political issues, and case studies of two recent programs in Tbilisi's historic districts: "New Life for Old Tbilisi" and "Betlemi Quarter Revitalization Programme."
Angela Wheeler holds a BA in Cultural and Historic Preservation and a BA in International Relations from Salve Regina University ('12). After working on projects in Georgia in 2010 (historic cemeteries) and 2011 (Dmanisi Archaeological Field School), she currently works in Tbilisi as part of the Fulbright US Student Research program. Her host institution is ICOMOS Georgia (International Council on Monuments and Sites), one of three NGOs that advises UNESCO on cultural heritage management. The aim of her project is to promote the integration of architectural conservation into urban economic development plans. Angela hopes to continue her studies as a graduate student in the fields or urban planning or public policy.
********
W-i-P is an ongoing academic discussion series based in Tbilisi, Georgia, that takes place at the International School of Economics (ISET) building (16 Zandukeli Street). It is co-organized by the Caucasus Research Resource Centers (CRRC), the American Councils for International Education: ACTR/ACCELS, and the American Research Institute of the South Caucasus (ARISC). All of the talks are free and open to the public.The purpose of the W-i-P series is to provide support and productive criticism to those researching and developing academic projects pertaining the Caucasus region.
Would you like to present at one of the W-i-P sessions? Send an e-mail to natia@crrccenters.org.
Tweet