Overall, the population of Georgia reports supporting inter-ethnic business relations. Yet, CRRC’s Caucasus Barometer (CB) longitudinal data show this support is declining. In 2015, Georgians were less likely to report approval of doing business with representatives of all ethnicities asked about than they were in 2009. Interestingly, only (dis)approval of doing business with Russians did not change. These trends are presented in this blog post. 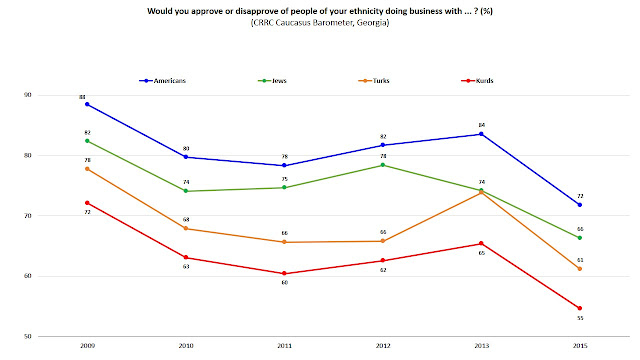 Note: Only the shares of ethnic Georgians answering “Approve” are shown on this chart. CB was not conducted in 2014. 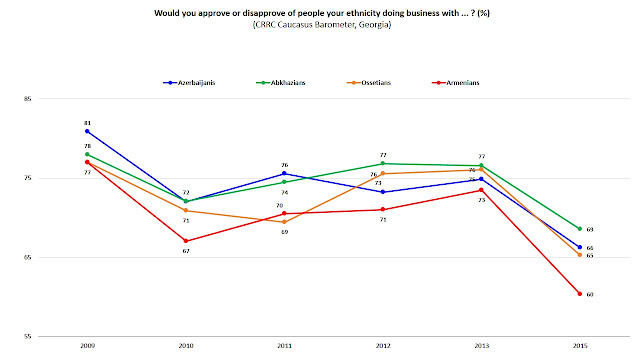 Note: Only the shares of ethnic Georgians answering “Approve” are shown in this chart. CB was not conducted in 2014.

At the same time, clearly stated disapproval of doing business with all the above ethnicities is increasing. In other words, an active substitution of disapproval for approval is observed.

Of the ethnicities CB asked about, only (dis)approval of doing business with Russians has been steady between 2009 and 2015, exhibiting only minor fluctuations. 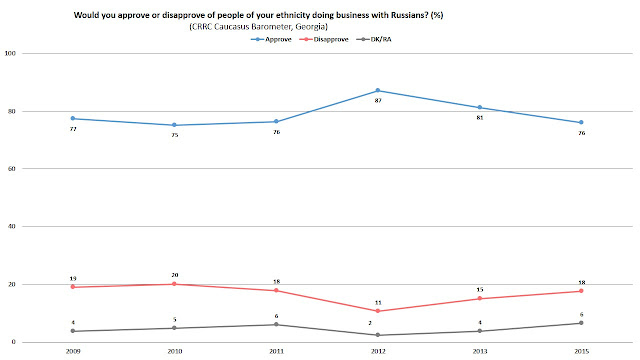 Calling 2014 turbulent for the world seems almost euphemistic. The world witnessed renewed Russian revanchism with the war in Ukraine and annexation of Crimea, the emergence of a highly successful militant Islamic organization, Islamic State in Syria and Iraq, and the persistently tense situation in Israel erupted into another war between Israelis and Palestinians.
12.06.2012 | სამშაბათი

How justified is it for Georgian women to bear a child or have sex outside of wedlock? Is the Georgian population tolerant towards homosexuals? What are views on issues such as these in the light of the western-oriented political course of the country? How do men and women compare in terms of liberal attitudes? To address these questions, this blog post presents the results from two waves of a nationwide public opinion survey entitled “Knowledge and Attitudes toward the EU in Georgia” conducted by CRRC in 2009 and 2011.
28.11.2016 | ორშაბათი

From the events of May 17th, 2013 when Orthodox priests and their supporters attacked demonstrators at an International Day Against Homophobia rally, to more recently when “sausage-wielding nationalists” attacked a vegan café in Tbilisi, various forms of intolerance have put Georgia into headlines internationally in recent years.
05.12.2017 | სამშაბათი

Georgia is often famed for its hospitality. While the country is more tolerant of other ethnicities, relative to Armenia and Azerbaijan, it has also experienced a rise in nationalist rhetoric and movements in recent years. A number of incidents have also taken place, with hate crime directed towards immigrants and religious and ethnic minorities. This blog post looks at attitudes towards different migrant groups based on a survey experiment in the Caucasus Barometer 2017 survey.
28.10.2020 | ოთხშაბათი