Slightly over a half of civil servants (56%) reported that the main reason they chose their job was an interest in working in the public sector. Forty-five percent hoped to improve their professional skills. The third most frequently named reason was a hope to improve the situation in their field. Importantly, a rather small share of civil servants (18%) reported a “stable job” as a reason for choosing to work in the civil service, and only 2% named an “attractive salary”. 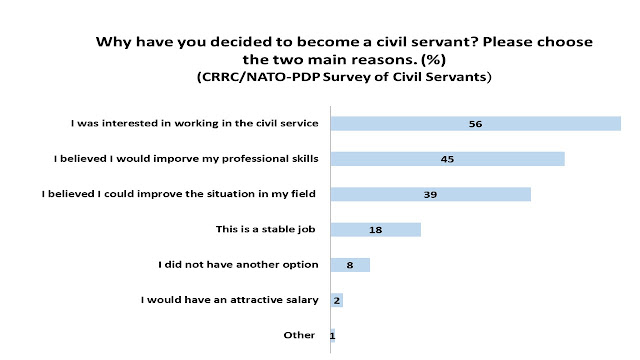 About half of civil servants named the opportunity to contribute to the development of the country as the main advantage of working in the civil service. The opportunity to acquire new professional skills was the second most frequent answer, while the opportunity to make new connections, work one’s way up within the organization, and work with competent colleagues were named rarely. 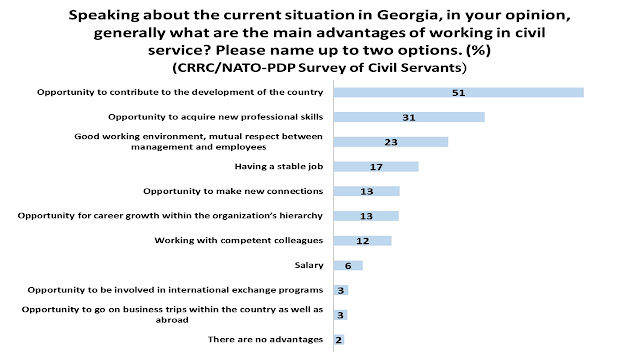 Civil servants most frequently assessed the motivation to work of those in the civil service as average (50%). Positive assessments, though, are much more frequent than negative ones (36% vs 15%). 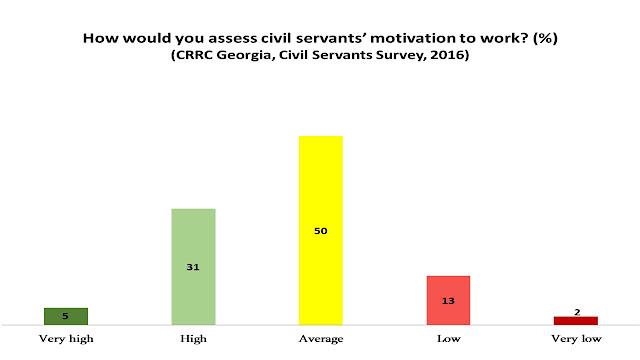 Note: To a certain extent, in response to most of the questions in this survey, civil servants tended to pick answers that can be considered socially desirable. Hence, social desirability bias is likely to have affected other responses as well, including assessments of other civil servants’ motivation to work. In order to avoid this bias in the case of this question, a very general wording was used: “How would you assess civil servants’ motivation to work?” This question measures civil servants’ reported perceptions of their colleagues’ motivation. To a certain extent, social desirability bias likely still influenced responses. However, this influence should be less than if the question had been asked about the respondent herself.

Should the 50% of “average” assessments be considered a problem? Probably. The state invests financial resources in the improvement of civil servants’ professional skills, and the country, overall, is interested in a high productivity of their work. Undoubtedly, motivation encourages productivity. Thus, higher motivation will also lead to a more efficient use of public resources.

While trying to increase civil servants’ motivation in Georgia, it is important to consider the problems they face. The most frequently named problem is a lack of professionally competent civil servants. A fear of losing one’s job and poor infrastructure come in second and third, followed by a fair number of other problems. 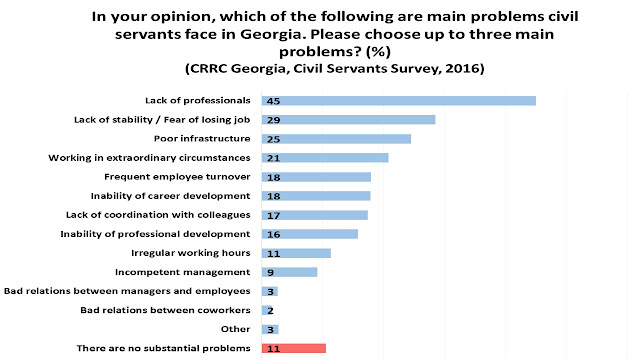 Addressing these problems may improve civil servants’ motivation to work. As a result, the country would benefit from higher productivity among civil servants.