How are the thousands of people in who were internally displaced by last year’s conflict faring? A partial answer is found in UNICEF’s June 2009 report assessing water, sanitation and hygiene conditions amongst IDPs in nine months after the August 2008 conflict, which, at its peak, displaced 138,000 people.

The authors of the assessment, carried out jointly by Action Contre la Faim and the International Rescue Committee, commend the Georgian government for acting quickly to resettle the nearly 30,000 people who could not return to their homes after being displaced. However, as the one-year anniversary of the conflict approaches, there is concern that the momentum is fading, while many of the gaps in infrastructure that resulted from the rapid resettlement process remain unaddressed.

The report evaluates both temporary collective centers and new settlements for IDPs, as well as a representative sample of villages adjacent to the settlements. The assessment is based on interviews with “key people and representatives” in the communities (although it is not entirely clear how these people were selected), as well as evaluations by experts. The report therefore allows one to compare community members’ own perceptions of their circumstances with the observations of specialists. The resident and expert evaluations often align rather closely, although there are some divergences. For example, the chart below shows that IDPs in a number of communities have a more positive assessment of their water supply than experts, while for most of the villages there is a consensus that the situation is rather bad. 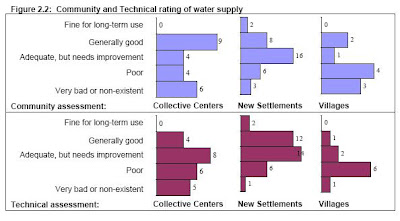 These discrepancies could be related to displaced persons’ prior living conditions: if, for example, an IDP formerly only had access to water from a well or spring, then running water for two hours a day in the new location may seem adequate – even if an expert would view the situation as in need of improvement.

Given the central role that water, sanitation and hygiene conditions play in day-to-day life, it is unsurprising that IDPs rank these items below only income and jobs (approximately 90% of IDPs are unemployed) when assessing their greatest needs. The report identifies a number of serious problems, the most pressing of which is reliable access to water (necessary not only for drinking and bathing, but also cooking, cleaning, and operation of toilets). Furthermore, although the large majority of collective centers and villages had safe drinking water, 40% of new settlements did not have water that passed national standards.

However, water was not the only issue of concern. Washing facilities in the majority of the settlements, regardless of type, were rated as either poor or non-existent. Problems with solid waste disposal impact not only these communities, but also the surrounding environment: the surveyed population dumps 6,000 tons of waste onto the Georgian landscape each year. On a positive note, all settlements scored very high on hygiene knowledge and practices.

One of the most noteworthy findings of the report is that the villages assessed were in many respects worse off than the IDP settlements – the chart above gives some sense of this. Moreover, 75% of villagers do not have access to an adequate quantity of water, versus 41% of of IDPs. Sixty-four percent of villagers, as opposed to 33% of IDPs, lack access to any bathing facilities. It appears that the water and sanitation conditions of ordinary rural Georgians lag behind those of displaced persons. And the infrastructure of those villages in which IDPs have been resettled face the additional strain of the extra population.
Fortunately, the report proposes some actions for the future, employing a detailed prioritization formula to determine a cost-benefit ratio based on the project cost, projected benefit and number of people served. Projects with low cost-benefit ratios (such as installing new waste bins) are recommended, as well as those that are durable (have a long-lasting impact) and those in settlements in critically poor condition. In addition to infrastructure fixes, the report suggests some more creative approaches, such as starting recycling and composting projects to cut down on solid waste (something even most communities have yet to do satisfactorily).

The full report can be found here.