Last week the EU Commissioner for Home Affairs, Cecilia Malmström, presented the Georgian government with a Visa Liberalization Plan between Georgia and the EU. This is significant progress from the previous Visa Facilitation Agreement from 2010 which eased the visa application process for Georgian citizens wanting to go to the EU. Under this previous agreement, the cost of an EU visa was reduced from €60 to €35 for Georgian citizens, and a maximum wait time of 10 days was established for a decision regarding the visa. However, in general the process of receiving an EU visa has remained rather complicated. Now, further reforms in document security, border control, migration, public order and human rights are required for a final agreement over an eventual visa-free regime. The final visa liberalization rules are expected to be implemented before the upcoming Eastern Partnership Vilnius Summit on November 28-29, 2013.
Yet, there may be economic and social consequences from the EU an eventual visa-free regime. As the International Organization for Migration (IOM) reveals in its country overview for Georgia, development of the country’s migration management system and a lack of economic opportunities at home are two major migration challenges facing Georgia. According to the 2012 Caucasus Barometer (CB), while only 6% of Georgians would want to permanently live elsewhere, 42% of Georgians would like to temporarily live elsewhere. 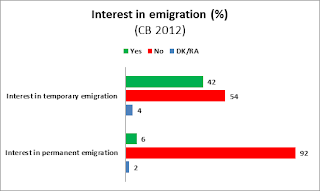 Georgians who are unemployed and looking for a job (59%) are more interested in temporarily going abroad than those who are not interested in a job. 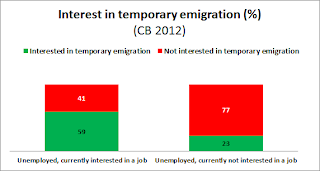 Additionally, students are the more interested in temporary migration than other groups.  87% of students said they would leave Georgia for a certain period of time to live somewhere else if they had a chance. Also, just over half of unemployed and less than half of those who currently have a job, are self-employed or are homemakers would like to temporarily emigrate. 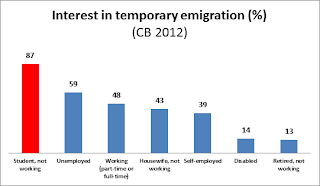 The results of the CB 2012 also show that younger Georgians are more interested in temporary emigration than those in older age groups. 67% of Georgians aged 18-35 said they would like to live outside Georgia if there was an opportunity, whereas less than half of Georgians 36-55 years old and a one-fifth of those 56 years or older said the same. 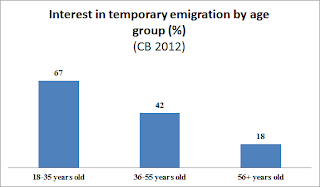 A final visa-free agreement could trigger immigration flows from Georgia to EU countries, especially as particular subsets of Georgians (e.g., younger, students, unemployed, and job-seekers) desire to leave the country for a certain period of time. Therefore, migration flows due to unemployment and difficulties while searching for a job might be controlled by promoting job counseling and placement centers, increasing employment prospects within Georgia and creating flexibility to adapt to changing labor market needs.
To explore more about job and employment related questions in Georgia, we welcome you to download the new 2012 CB dataset here.