The Wave of the Future: Optimism, Pessimism and Fatalism in Georgia


A recent CRRC regional blog post analyzed the presence of fatalism in Georgia. The post cited CRRC Caucasus Barometer (CB) data which shows that in 2013, 28% of Georgians agreed that “everything in life is determined by fate.” While the CB findings demonstrate that a sizeable portion of the adult population is fatalistic about the future, Georgians are increasingly likely to see that future in a positive light, whether it be determined by fate or not. This blog post analyzes survey data and finds a recent trend of Georgians describing both their present economic situation and expected future situation in more positive terms than in previous years. However, survey results also illuminate dissonance in Georgian society, as urban residents and the younger population are more likely to look to the future with optimism than are rural dwellers and older Georgians. Notably, members of the latter groups are more likely to hold fatalistic attitudes.
CB longitudinal data demonstrates that over time Georgians have become more likely to describe their current household standing in positive terms. The survey asks: “Let’s imagine there is a 10-step ladder reflecting the economic standing of all households in Georgia today…On which rung of this ladder do you think your household currently stands?” For the purpose of this blog post values were re-coded from a ten-point scale to a three-point scale, with rungs 1-4 designated as the “low” position, 5-6 designated as the “intermediate” position, and 7-10 designated as the “high” position. In 2009 CB results showed that 64% of Georgians described their household being in the “low” economic position in society. That proportion remains high but has steadily declined since, and by 2013 only 45% of citizens described their household position in the same terms. It should be noted that the largest decline in negative responses occurred from 2009 to 2010. One plausible explanation is that GDP recovered rapidly over the same period, with the World Bank reporting that Georgia’s GDP contracted by 3.8% in 2009 before growing by 6.3% in 2010. As for the “high” position, 11% of Georgians placed themselves there in 2013, compared with only 4% in 2009. It appears that most of the difference on the time series is accounted for by people changing their perception from “low” to “intermediate.” 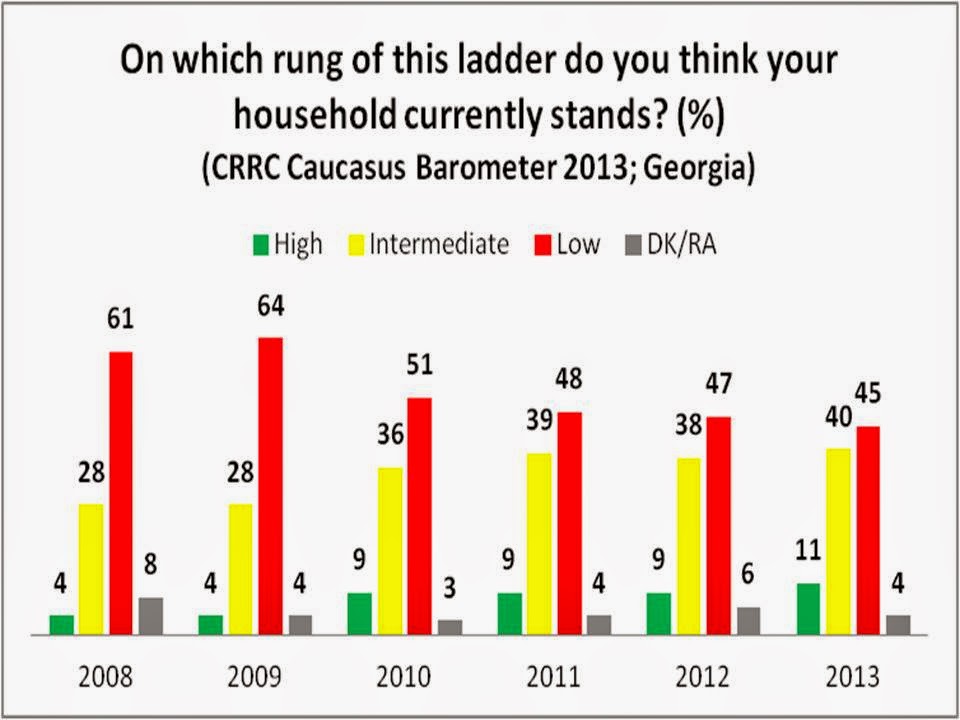 Not only do Georgians feel better about their current standing, they are looking forward to a brighter future. In recent years the vast majority of adults in the country have seen the future of their households in uncertain terms at best, indicating “Don’t Know” or “Refuse to Answer” on the survey, and pessimistic terms at worst. Those attitudes haven’t disappeared, but public sentiment is becoming more sanguine. After describing their current position, respondents are asked “On which rung of this ladder do you think your household will be standing 5 years from now?” The percentage of Georgians expecting their household to be in the “high” position increased over a span of four years, showing an overall rise from 16% in 2009 to 29% in 2013. By contrast, the percentage of those indicating the “low” position was stagnant. 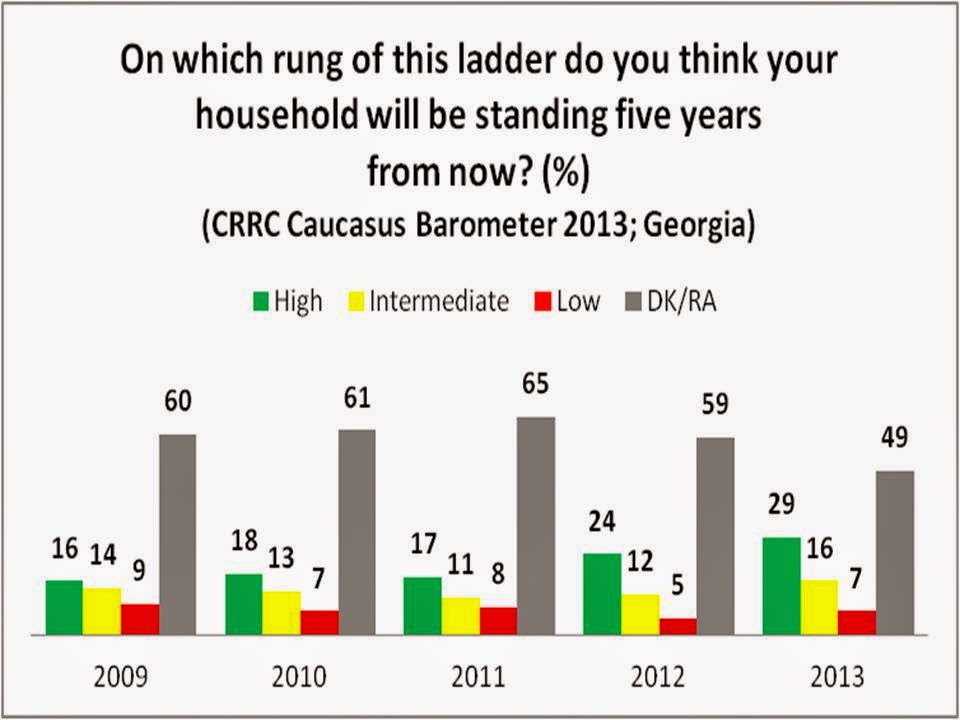 What is most telling about these numbers is that the proportion of pessimists did not rise, given that the proportion of “Don’t Know” and “Refuse to Answer” responses declined from 2009 to 2013, from 60% to 49% (after peaking at 65% in 2011).  This figure remains relatively high, however. At the same time the share of people indicating “high” and “intermediate” positions increased. Taken in aggregate, these numbers suggest that Georgians are more certain about their futures than they were four years ago, and increased certainty has apparently translated into higher expectations.
The data indicates, however, that residents of urban areas are much more likely to view the future with optimism than rural residents. Of those expecting their household to be in the “high” position in five years, 67% percent lived in urban areas (including Tbilisi). Of those expecting to be on the “low” position, 62% lived in rural areas. Thus we observe an association between urbanization and optimistic economic expectations. There is also a discord between age groups. Those aged 18-35 are the most likely to expect to be in the “high” position, while those aged 36-55 and 56+ are less likely to have that expectation and are increasingly likely to give DK/RA responses. According to the CB 35% of Georgia’s young adults indicated “high” compared to 27% of the middle-aged population and 23% of the elderly. It should also be noted that the under-36 age group constituted a larger proportion of the population in Tbilisi than in other urban (non-Tbilisi) or rural areas (42% of Tbilisi’s adult population is under 36, compared to 36% of the population in other urban areas and 31% of the rural population), so it is unclear whether age group or settlement type is a better indicator of optimism. 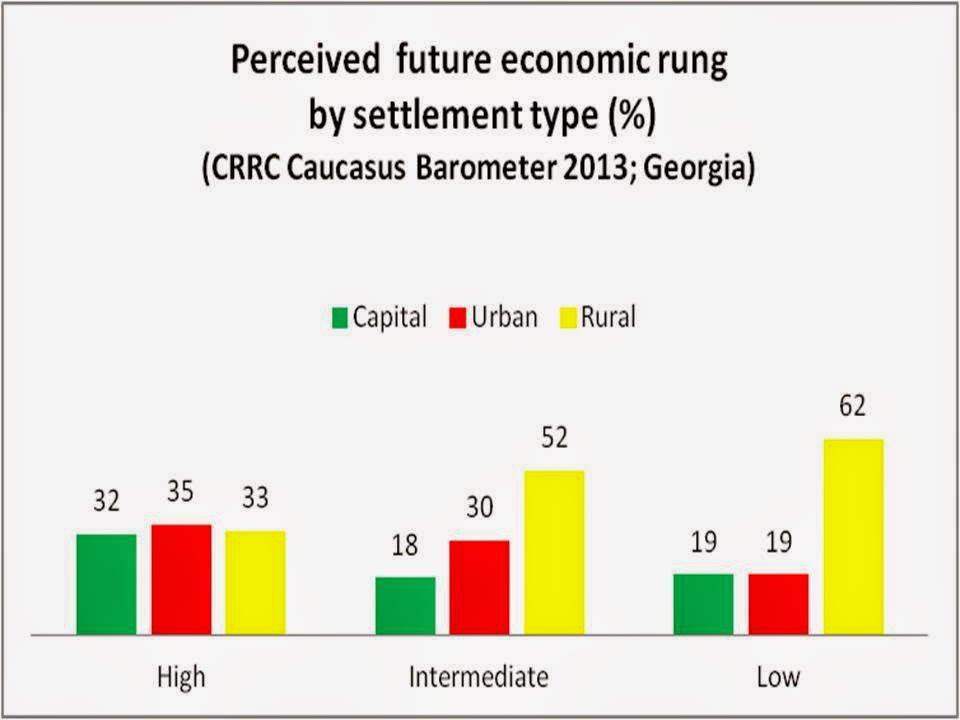 The presence of fatalistic attitudes offers a possible explanation for these cleavages. Those residing in Tbilisi are more likely to be optimistic about the future and much less likely to agree that “everything in life is determined by fate,” with the CB 2013 finding that 18% of Tbilisi residents agreed with the statement compared to 29% of urban Georgians (excluding Tbilisi) and 32% of rural inhabitants. However, it must be noted that non-Tbilisi urbanites were more likely than residents of Tbilisi to indicate both expectation of the high economic position and having fatalistic attitudes. As for the age divide, only 23% of those aged 18-35 indicated fatalistic attitudes, compared to 26% of the 36-55 age group and 34% of those 56 and over. Comparing age groups, we observe a negative association between optimism for the future and fatalism.
This statistical analysis indicates that Georgians have demonstrated increasingly optimistic attitudes over the past four years. While that is good news, exuberance should be tempered by the fact that high expectations are largely concentrated in the urban population and those under the age of 35. The lack of optimism amongst the rural and 36+ populations also appears to be associated with the presence of fatalistic attitudes in Georgia. Georgian society is becoming more optimistic on the whole, but growing optimism is not spread evenly amongst the population.
For additional information concerning public opinion in Georgia take a look at our data using the CRRC’s Online Data Analysis tool.