The recent history of the South Caucasus as seen by the world’s media - Part 2, Georgia

In Monday's blog post, we looked at a snapshot of Armenia and Azerbaijan’s representation in the global media from 1979 to present. Today, we take a look at the third South Caucasus state, Georgia. What are the events that have popped up in Georgia and made international news over the last 35 years?

Much as with Azerbaijan and Armenia, early peaks in the graph below mark the conflicts which started before and erupted after the fall of the Soviet Union. The first peak marks the tragic events of April 9th, 1989, when soldiers suppressed protests for Georgia’s independence from the Soviet Union and against Abkhaz actions towards secession. The next peak which appears on the graph below is related to the outbreak of the Georgian Civil War in 1991. The Abkhaz conflict, while simmering in the later years of the Soviet Union, does not seem to be extensively covered by the global media until 1992, when Abkhazia was invaded by Tengiz Kitovani (at the time he was the head of the Georgian National Guard, an organization which straddled the boundary between paramilitary and official military). The end of the war and the Zviadist rebellion which immediately followed Kitovani’s retreat from Abkhazia appear at peak 3. 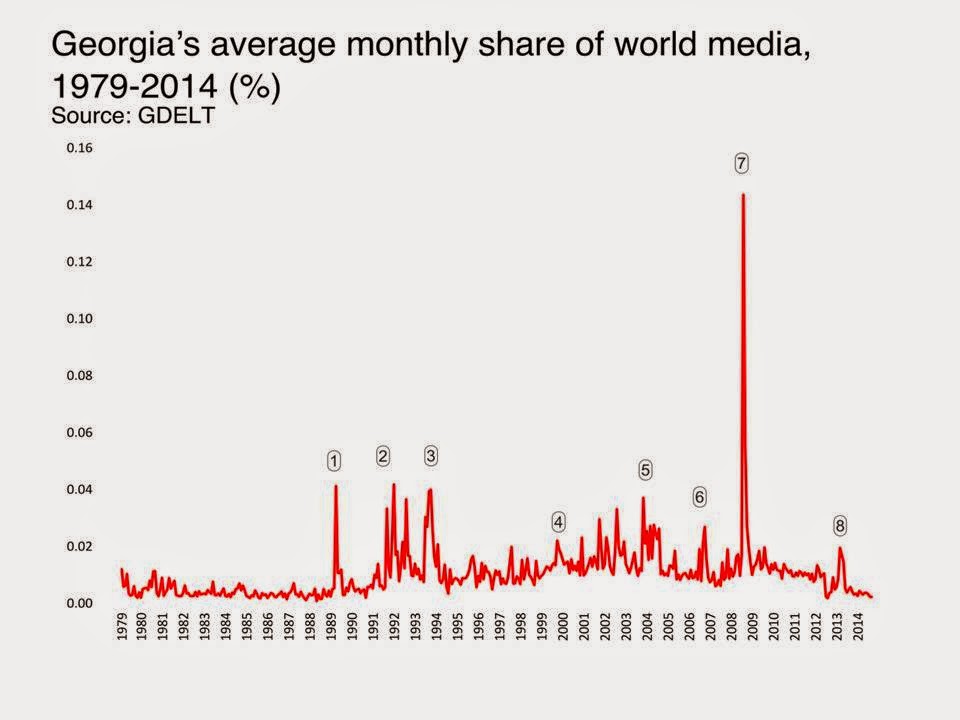 Note: In this graph, the country’s mean monthly share of global media coverage (defined as all media contained within the GDELT database) is shown. The table below gives a summary of events in Georgia according to the peak they correspond with:

After peak 3, media coverage of Georgia decreases for a period, but appears to pick up in the lead-up to the Rose Revolution, with a small peak (4) created by the 1999 parliamentary elections. Although Georgia watchers’ first reaction to the slow rise in media attention from 2001 to 2004 may be that the unnumbered peaks mark the November 2001 student protests over the shutdown of Rustavi 2 and Shevadnadze’s Citizens’ Union of Georgia’s loss in local elections in 2002, these events seem to receive sparse attention. These upticks in coverage coincide more closely with Vladimir Putin’s fanciful claim that the Pankisi Gorge was a hotspot of terror in the aftermath of September 11th, and the claim floated that Osama Bin Laden could have taken refuge in the Pankisi Gorge. Peak 5 represents the Rose Revolution, while peak 6 coincides with the 2006 local elections, which likely gained substantial media attention as a follow up event to stories on the Rose Revolution. Peak 8 shows the media’s reactions to the anti-IDAHO (International Day against Homophobia and Transphobia) rally which occurred in May of 2013 in Tbilisi.

The unprecedentedly high peak (#7) on the graph above, the August 2008 war with Russia, is an important case in understanding what gets covered and what does not. This event had a synergetic presence with other media events at the time, whereas other events which Georgia watchers likely see are missing from the above graph had weaker media synergies. Since the 2008 August War was happening against the backdrop of the Beijing Olympics, the world was quite shocked at the juxtaposition of an event which is intended to promote peace, on the one hand, and a large country at war with a small one, on the other hand. By comparison, the 1991 independence of Georgia from the Soviet Union is an event which appears to have been crowded out by similar events during the period – namely, the independence of the other former Soviet Republics, the collapse of communism in Eastern Europe, and finally, the chaos which followed all of these events.

Events which received less attention than one might expect include the various assassination attempts against Eduard Shevardnadze and the November 2007 anti-government protests. Most notably, the 2012 parliamentary elections which marked a watershed event on the Georgian political landscape do not coincide with a substantial peak.

While GDELT data is a crude instrument for looking at history, it does paint an interesting picture of the relative intensity through which a country has appeared on the world stage through media reports. What other events do you see pop up in the graphs above? For readers interested in more information on the GDELT project, visit their website here, and for readers more interested in the South Caucasus and changes related to the events discussed in this and the previous post on Azerbaijan and Armenia, take a look through the CRRC Caucasus Barometer here.