The UN Study on Violence against Children, presented in the UN General Assembly in October 2006, has been followed up with an individual country report on School Violence in Georgia. The cross-regional study has a sampling plan including over 1300 children from 93 Georgian schools. The study illustrates a generally sad school environment in Georgia where as much as 47,1% of the school pupils have reported physical violence and 47,5% psychological violence during the last year. Below are some of the findings that capture the rate of victimization to physical, psychological or sexual violence in Georgian schools: 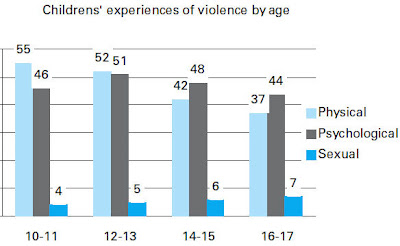 The graph above illustrates that different forms of abuse is following different trends across age groups. Whereas physical violence decreases as children grow older, psychological abuse reaches its peak among 12-13 year olds and thereafter decreases marginally in the coming years. Sexual violence increases steadily as children grow older but the significance is statistically very small considering the fact that the margin of error is ± 3%. However, the actual number of sexual violence is higher than what is indicated in the graph above. UNICEF points out that reporting of sexual victimization has a low frequency which makes reporting of some cases of sexual violence go unreported. 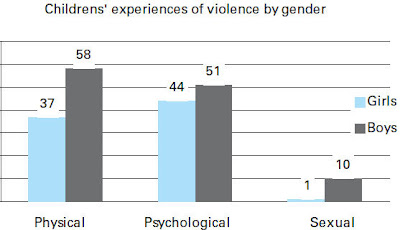 Scrutinizing the indicators of gender differences entails significant differences between boys and girls. In all of the three violence variables, Georgian boys reported a higher grade of victimization to physical, psychological and sexual violence. According to UNICEF, this makes the Georgian school environment to stick out globally since girls usually indicate a higher rate of psychological victimization than boys in equivalent studies undertaken in other countries.

Despite the fact that nearly half of the pupils in Georgian schools have been subject to one or another form of violence, the overwhelming majority feels either safe in the school environment and/or likes to go there. But, these numbers should not be taken as an indicator that captures the overall perception of personal safety of children. The school environment may be a safe environment for ¾ of Georgian children but can also indicate that it functions as a substitute and/or a haven for children with a worse home environment.