PhD thesis: What are the Motives for Islamic Activism in Azerbaijan?

The perception that the global rise of Islamic activism is nurtured by a phenomenon depicted as “Global Jihad” is contested in a recent PhD dissertation titled "Islamic Activism in Azerbaijan: Repression and Mobilization in a Post-Soviet Context". Dr. Sofie Bedford focused upon the growing Juma (Shiite) and the Abu Bakr (Sunni) mosque communions in Baku and argues in her thesis that they are, by and large, being nurtured by politics on a national level. The mobilization of Islamic activism in Azerbaijan can be understood as a result of:

(a) The younger generations wish to break ties with Soviet institutional structures, in particular those that are characterized by authoritative measures towards individual choice
(b) Discontent with societal development after Azerbaijan’s independence

Azerbaijan, considered as one of the least religious nations in the world, has since the end of the 1990’s experienced repressive state measures towards domestic Islamic movements. The pretext for state sanctioned clampdowns against the growing national opposition with distinguishable Islamic features required, according to decision makers, unorthodox countermeasures.

“By re-imposing strict state control over the religious practitioners and the religious organizations, the leadership in the independent republic hoped, just as their Soviet predecessors, to neutralize the oppositional potential in religion in order to avoid a development as in neighboring Iran. Some Moslem groups that questioned the religious structures got classified as oppositional and were actively opposed by the state”. Sofie Bedford 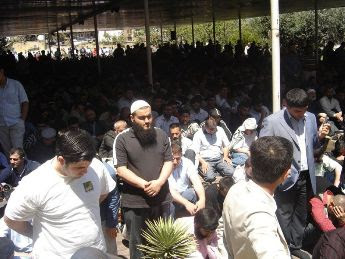 Friday prayers at the Abu Bakr mosque in Baku, Azerbaijan

Bedford argues that a crucial component of the state repression that strengthened Islamists consisted of official negative propaganda on the Abu Bakr mosque as a “nest for violent wahabis” and the Juma communion as “radical Shiites planning an Islamic revolution”. Instead of ending the mobilization of the mosque attendees, the state’s counterstrategy back clashed and strengthened the affinity of the targeted groups as discontent with corrupt state policies thrived.

“Amongst the visitors, and many others, Juma and Abu Bakr came to symbolize an unafraid, creative and free Islam which gave renewed popularity and, consequently, increasing numbers of attendees. It is important to stress that even if there were many similarities between the mobilization processes in the Juma and Abu Bakr communions, the study shows interesting differences, in particular in their interaction with the state in the later stages of the mobilization processes”.

In order to access the full PhD dissertation, please follow this link. In addition to the dissertation, we would also like to recommend this shorter article titled “Islamic Revival in Azerbaijan” for our readers out there.