One step forward, two steps back? European integration in Georgia after the Association Agreement


So far, 2014 is shaping up to be the year that Georgia might begin to reap the benefits of its pro-EU and pro-NATO foreign policy. In June, Georgia signed the EU Association Agreement despite fears over Russian agitation. NATO has indicated its readiness to discuss a “substantive package” for Georgia, if not a Membership Action Plan. However, despite these gestures towards closer cooperation, some elements of the decision to sign the Agreement have caused friction. For example, the introduction of an anti-discrimination law in April, that contained protection for sexual minorities, was designed to make the Georgian legal environment more EU-compatible. However, the introduction of this protection resulted in backlash from the Georgian Orthodox Church (GOC). Thus, although the signing of the Association Agreement is widely seen by Georgians as a step forward for the country, friction over values has the potential to push the integration agenda back.

The Association Agreement is a sign of strengthening political and economic ties with Europe. However, movement towards a shared cultural space and value system has received less attention in the run-up to the signing. As survey results from the 2013 Survey on Knowledge and Attitudes toward the EU show, political, economic and institutional ties were often cited as anticipated outcomes of the Agreement. Legal reforms aimed at lessening discrimination and protecting minority rights were not an integral part of the public debate about what EU integration would mean for Georgia. Note: This survey was conducted by CRRC-Georgia for the Eurasia Partnership Foundation. The respondents could select one option from a show card

The adoption of the European-style anti-discrimination law in April 2014 has sparked a debate about the compatibility of traditional Georgian values with European norms, especially with respect to the protection of sexual minorities. This suggests that the widespread public support (88%) for strengthening ties with the EU in Georgia may be dependent on assumptions about the political or economic nature of the EU, rather than norms and values. Legal reforms related to the Association Agreement have had an immediate impact on Georgian life (unlike closer political and economic ties), and there are an estimated 350 EU laws in the pipeline. The law itself bans all forms of discrimination, whether on the basis of language, gender, religion or sexual orientation. Although the anti-discrimination law is just one of many legal components to the EU-Georgia cooperation, the vocal reaction of the GOC against the inclusion of sexual minorities, which the Patriarch deemed “the legalization of illegality,” suggests that the journey towards greater European integration might pose some challenges.

During a street party that followed the signing of the Association Agreement on June 27, 2014, the Patriarch addressed the crowd with a message of celebration and caution. While describing the event as “a happy day”, the Patriarch reinforced the idea that moving closer to Europe is “not only a huge honor, but also a huge responsibility” for a country with its own ancient culture and values. This is important, especially since that the majority of Georgians (82%) trust their religious institutions – much more than those who trust in the EU (33%). Moreover, in 2013, 52% of Georgians said that they would vote against EU membership because of harm to Georgia’s culture and traditions. Thus, it will be interesting to see whether this percentage increases in 2014. In an article in Foreign Policy, Peter Pomerantsev noted that, “the church's [GOC] opposition to some EU principles puts it on a de facto collision course with EU integration policy." 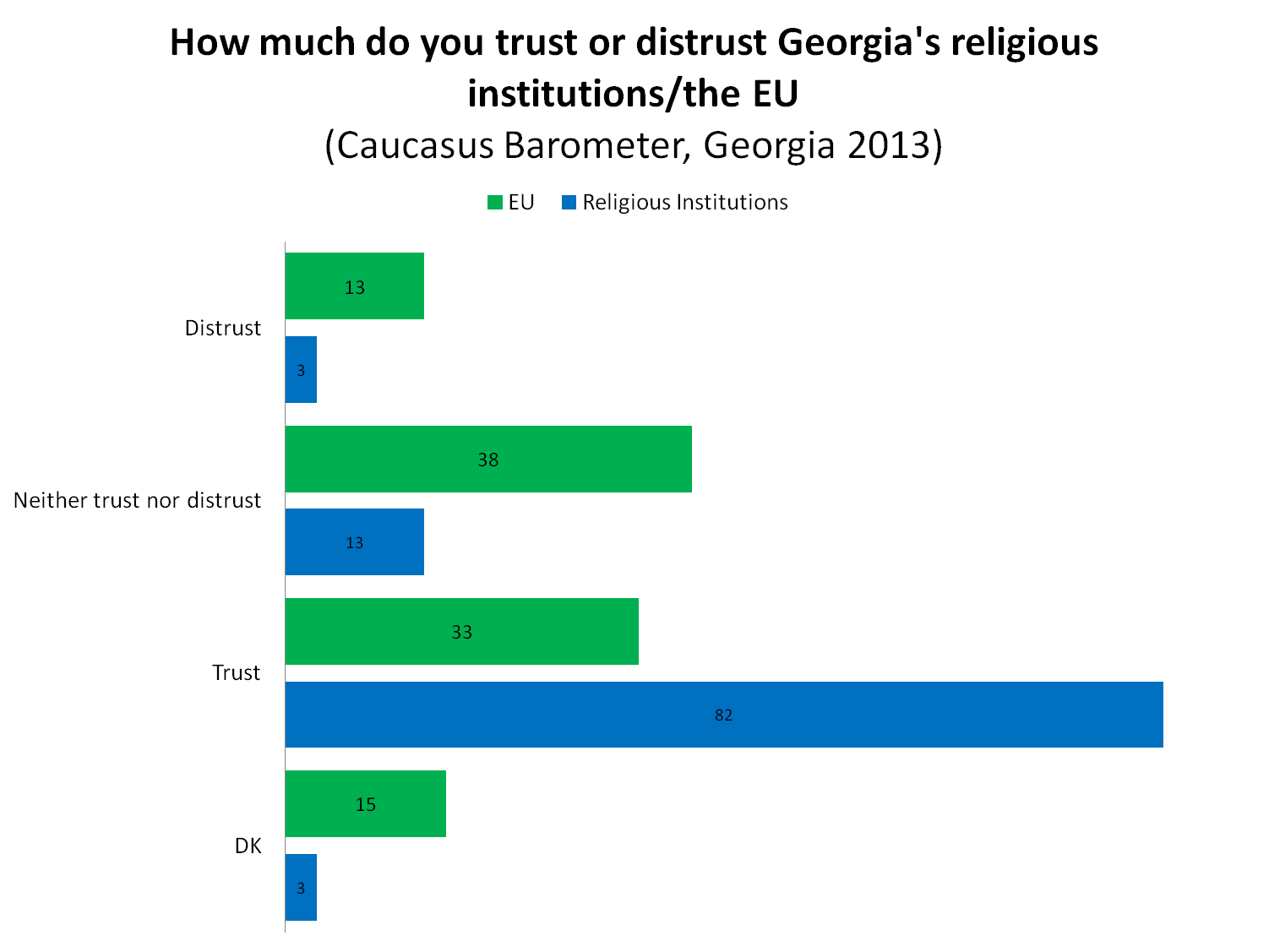 Thus far, the signing of the Association Agreement has resulted in a celebratory mood in Georgia. If integration is to continue moving forward, continued public support and the commitment of Georgian politicians, EU representatives and religious spokespeople will each be key. This blog has explored the climate in Georgia following the signing of the Association Agreement. It has also focused on attitudes towards the new anti-discrimination law and trust in the EU, as well as in religious institutions. You can read more analysis on trends in Georgians’ attitudes towards the EU here. Also, please visit our Online Data Analysis tool.
Tweet