Nostalgia for Stalin in Georgia: Between Respect and Unjustifiable Actions

A recent assessment of attitudes towards Stalin in Georgia has been broadly discussed within the country, as well as abroad. Many have considered Georgia to be a “Stalin-favorable country” since Stalin himself was an ethnic Georgian. However, using data from the 2012 Caucasus Barometer (CB), this post shows that while there remains widespread respect for Stalin, the methods of his rule are far from desirable in today’s Georgia. Also, attitudes towards Stalin in Georgia are compared to those in Armenia and Azerbaijan.
Overall, the CB data reveals that Georgians have more positive views towards Stalin than Armenians and Azerbaijanis. However, only a very small proportion in each country admires Stalin. Respect and sympathy are the prevailing characteristics that Georgians use to describe Stalin, whereas it is indifference in Armenia and disgust in Azerbaijan. Azerbaijanis were also most likely to say they don’t know who Stalin is (22%), compared to 9% in Armenia and 5% in Georgia. 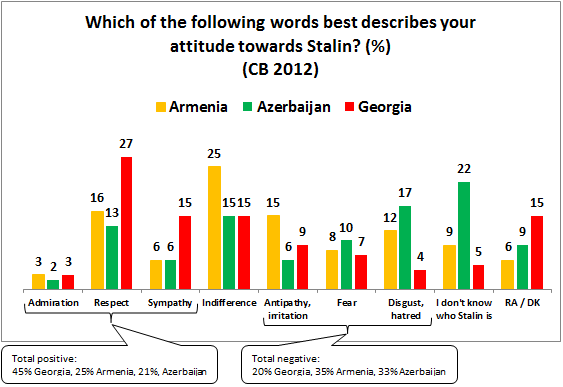 Survey respondents were provided with a list of 7 attributes and asked to select only one word that best described their attitude towards Stalin. “I don’t know who Stalin is”, “don’t know” and “refuse to answer” were not listed as answer options, but were recorded if mentioned by respondents.
According to the CB, only a small percentage in each country believes that the sacrifice of the Soviet people was definitely justified because of the results achieved (5%-7%). The data also shows that around half of each of the populations think the sacrifice was definitely not justified. Therefore, the positive features attributed to Stalin in Georgia do not overshadow the sacrifices made by the Soviet people during his rule. 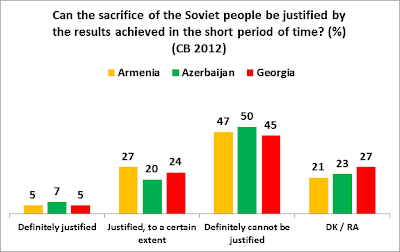 Moreover, very few people in the South Caucasus see themselves living in a country ruled by a person like Stalin. This includes Georgians who attributed more respect and sympathy towards Stalin than Armenians and Azerbaijanis. Over half of the population in each country says they would probably or definitely not like to live and work in such a country. 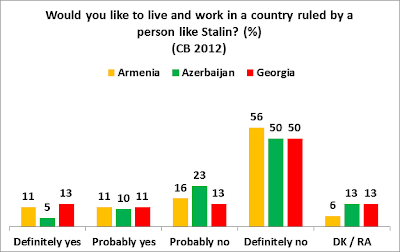 Although many people in the South Caucasus believe the sacrifices made under Stalin cannot be justified and they would not want to live in a country ruled by a leader like Stalin, more than two fifths of adults (55% in Armenia, 44% in Azerbaijan, and 68% in Georgia) believe Stalin was a wise leader who brought power and prosperity to the Soviet Union.  It is interesting to note that even in Georgia, where well over half of the population thinks Stalin was a wise leader who brought prosperity, this positive attitude is not related to a desire for a non-democratic style of leadership. 69% of Georgians who strongly consider Stalin to have been a wise leader prefer democracy to any other kind of government, whereas only 7% prefer a non-democratic government under certain circumstances (another 7% is indifferent). Thus, the majority of Georgians consider democracy to be the best form of government for today’s Georgia even though many feel respect for Stalin as a leader. In addition, 69% of Georgians who completely agree that Stalin was a wise leader support NATO membership and 73% support joining the EU. Thus, respect for Stalin does not indicate support for non-democracy or a turn away from Western institutions. 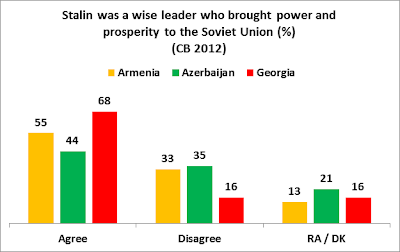 Finally, CB data shows that Armenians feel that they will always have need for a leader like Stalin to a larger extent than Georgians or Azerbaijanis. 38% of Armenians say they will always feel the need for a leader like him who would come and restore order, compared to 28% of Georgians and 19% of Azerbaijanis who say the same. 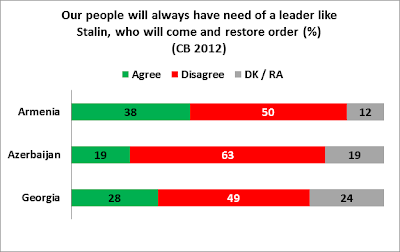 This blog has shown that over half of the populations in the South Caucasus feel the sacrifices of the Soviet people under Stalin were not justified and they do not desire to live in a country with a ruler like him. Yet, many people in all three countries view him as a wise leader who brought prosperity to the Soviet Union. Although Georgians have far more respect and sympathy for Stalin than Armenians and Azerbaijanis, most Georgians continue to be oriented towards membership in Western organizations such as NATO and the EU. Thus, the data agrees with the assessment in Carnegie Endowment’s 2013 report entitled “The Stalin Puzzle” that “for Georgians, Stalin is much more a national icon than a political model.”
For more data on the attitudes towards Stalin in the South Caucasus, please visit the new 2012 Caucasus Barometer dataset.