For those of you previously following our blog, you will be aware that we have a fascination with maps, and have pointed to the absence of the Caucasus in Google Maps. Recently I tried out the maps feature on my Nokia phone (one of those with a snazzy GPS). I knew that the map would be rough, but I was surprised to find that it had a major road in it that doesn't exist. 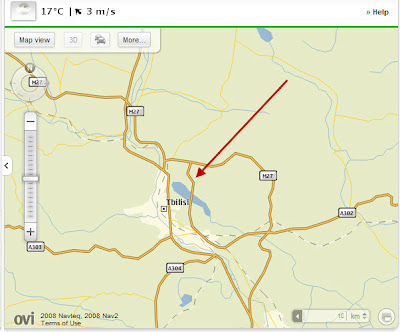 As highlighted with the arrow, there is an extension of the A302 that runs right over Tbilisi Sea. No one I have talked to ever had heard about this road being planned, and it wouldn't make much sense either: you would have to build a bridge of nearly 2 km across the waters, when the M27 bypass in the north works perfectly well.

Highlighting this issue to Nokia was complicated. The websites hide themselves behind automated replies; Navtech (the company that supplies the maps and has a feedback mechanism) also gives an automated reply that indicates that map updates are determined by Nokia. Eventually, I did get through on Nokia's new online platform, Ovi.com, where I did get a friendly response and a promise that they would forward the information. Let's see.

Now if that sounds like a lot of effort, it's partially because we think that better maps could make a huge difference. Imagine citizens sending in SMSes if certain public services don't deliver (electricity, water, garbage collection). And imagine if everybody could look at that map. We would instantly know where real problems are.

Where accountability is still developing, mobile devices could provide critical solutions. But for that, the maps would have to get a lot better -- and that's true for Google maps as well.
Tweet