Many domestic and international observers consider the territorial dispute over Nagorno Karabakh to be one of the most significant issues in Azerbaijan. Gibler and Miller (2012) argue that "states must often settle territorial issues with their neighbors in order to democratize" ("Quick Victories? Territory, Democracies and Their Disputes"). The 2011 Caucasus Barometer (CB) covered several questions in Azerbaijan and Armenia about Nagorno Karabakh. This blog will cover the results in Azerbaijan and the next blog will cover the results in Armenia. The results show that the territorial problem is considered one of the most important issues in Azerbaijan. There is also a great deal of uncertainty about when the conflict will be resolved, and whether a solution would be achieved by peaceful negotiations or by force. Additionally, most of the population in Azerbaijan thinks Turkey should be involved in the conflict resolution process, and a majority of Azerbaijanis favor the integration of the area within the national boundaries of Azerbaijan. 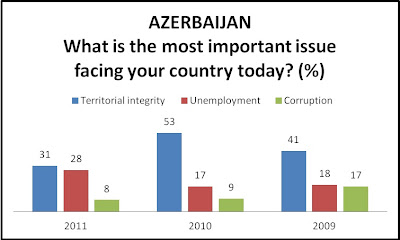 Source: CB 2011, 2010, 2009
About one third (31%) of Azerbaijanis in 2011 consider territorial integrity to be the most important issue in the country—followed by unemployment (28%). This is a substantial drop from 2010 when just over half of the population found territorial integrity to be the most important issue in the country. There is no notable variation in opinion across age groups, gender or level of education. For example, men are as concerned about this issue (32%) as women (30%).
In general, uncertainty and pessimism are the most widespread feelings about finding a solution to the conflict. About 34% of Azerbaijanis have no idea when the conflict will be resolved. 10% think Azerbaijan and Armenia will never be able to find a solution. 5% believe the problem will be resolved within the next year, 24% say in 2-5 years, 12% in 6-10 years and 12% in more than 10 years. The remaining 3% believe that the conflict has already been resolved.
Public opinion is also split about whether a potential solution would most likely be achieved by peaceful negotiations or by force. Just about 51% in Azerbaijan think a solution will come about by peaceful negotiations and 42% think a forceful solution would be expected. In addition, survey respondents were asked to indicate their level of acceptance over separately listed potential outcomes to the conflict. The majority (90%) favor the integration of Nagorno Karabakh within the national boundaries of Azerbaijan (without any kind of regional autonomy). 23% definitely favor granting the region some degree of autonomy (28% would accept autonomy under some circumstances and 40% would never accept it). Other provided options such as joint governance of the region by Armenia and Azerbaijan, the establishment of an independent state of Nagorno Karabakh, or making the territory a formal part of Armenia are not favored by the majority of the population (84%, 82% and 95%, respectively).