Media Freedom in the Caucasus

May 3 is World Press Freedom Day, and an occasion to look at how the three countries are doing in terms of press freedom. Freedom House has released a comprehensive report with detailed summaries. 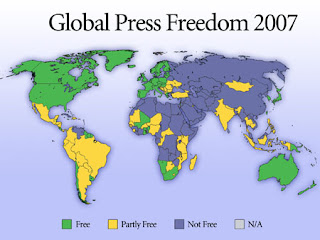 In regional rankings, Georgia's cup is at least half full. In Freedom House's map (see above), it is a little yellow speck. Except for the Baltics, only Ukraine is doing better among post-Soviet states. In this relative post-Soviet ranking, Armenia follows after Georgia. Azerbaijan is not far down that list, lagging behind Moldova and Kyrgyzstan. In other words, the Baltics are way ahead, the Caucasus trails after Ukraine, but generally does better than Russia, Belarus or Central Asia (with Bishkek sneaking ahead of Baku).

The narrative summaries provide details to back up the claims. Extensive libel laws in Armenia make it possible for powerful people to suppress criticism. Similarly, Freedom House says that defamation lawsuits seem to be a favorite method of silencing critical journalists in Azerbaijan. The interior minister alone brought five cases last year. But the report also documents several cases of intimidation, beatings, and one unresolved high-profile murder in Baku. In Georgia, a mix of government pressure and journalist self-censorship remain a problem. Not documented, but certainly a factor, is the sheer clumsiness of the Georgian government in handling the media: journalists tell farcical stories about hunting down basic information from government representatives.

In all of the countries, the commercial viability of independent media limits the freedom of expression. An independent Public Broadcaster is a desirable solution, but the very notion of independence is both a precondition and a result of a more mature democracy.
Tweet