Georgian parliament is set to debate the introduction of broader subtitling (to replace dubbing) of foreign-language films on television. From the research point of view, this is excellent public policy. There may be some aesthetic disadvantages to subtitling, and viewers may take some time to get used to subtitles rather than voiceovers, but overall the educational advantages far outweigh any possible disadvantage.
Subtitling, rather than dubbing, has long been associated with superior foreign language ability. Countries that subtitle generally tend to be good in foreign languages. Examples include the Scandinavian countries, but also Netherlands. Several transition countries have taken the clever decision to go for subtitling, in order to further boost foreign-language ability. In Georgia (and the Caucasus generally), English is not spoken very widely. 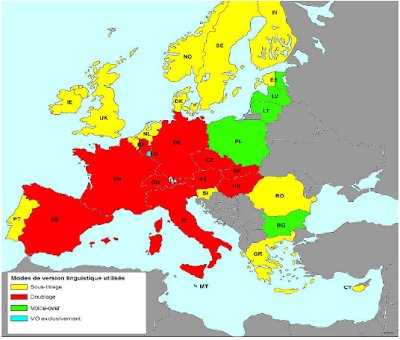 http://mediadeskpoland.eu/upload/PP_Comite_media_280708_FINAL.pdfYellow: subtitles; Red: dubbing; Green: voiceover.
Countries that dub systematically tend to be relatively poor in foreign languages, examples including Germany (in spite of fairly high-quality teaching in schools), France, and Spain, and even worse in their pronounciation. Georgia has great opportunities if it develops extensive foreign language skills in English, maintains the skills in Russian, and ideally adds yet other languages (French, Persian, Turkish, German). Subtitling is one important step in that right direction.
The research evidence for this is strong. Danish and Romanian high school students, according to a 2003 Danish study, outperform German and Italian students in English comprehension. Denmark and Romania provide subtitles, Germany and Italy dub foreign-language films. In one study, 25% of Dutch primary school children said that they learned more English from television than at school. Scandinavian success in educational tests is consistently linked to subtitling on TV. Many other experimental setups have demonstrated the positive impact of subtitling on foreign language acquisition, including a better understanding of pronunciation (see Koolstra, 2002). Realistically, Georgia would have to invest dozens of millions to achieve a comparable impact through teaching across schools, and would still not reach the out-of-school population.
However, there is another important argument in favor of subtitling -- but one that is less obvious. Average families in Georgia watch television for around three hours per day. International studies have shown that television has a negative impact on children and youth -- but this impact could be reversed if children watch television in a foreign language, with subtitles. Studies demonstrate that television with subtitles helps children to learn reading (more strictly speaking: text recognition, or "decoding"), since they need to rely on subtitles to recognize what is being said (Koolstra, 1997). In other words, by subtitling, television becomes a powerful educational instrument that strengthens the link to written language per se, including one's own national language.
This draft law is an excellent public policy initiative by the government. It is cheap, comprehensive, turns a potential problem (TV consumption by children and youths) into a real asset, and could increase educational levels. From the research point of view, the available evidence suggests that subtitling deserves unqualified support.
Koolstra, C.M., Peeters, A.L., & Spinhof, H. (2002). The pros and cons of dubbing and subtitling. European Journal of Communication, 17(3), 325-354.Koolstra, C.M., van der Voort, T.H.A., & van der Kamp, L.J.Th. (1997). Television's Impact on Children's Reading Comprehension and Decoding Skills: A 3-Year Panel Study. Reading Research Quarterly, 32(2), 128–152.
Tweet