Internet and Computer Usage in Azerbaijan

The level of computer and Internet usage has become a salient issue in Azerbaijan in recent years, particularly in light of efforts to diversify the country's hydrocarbon-rich economy through the development of the Information and Communications Technology (ICT) sector. Taking into consideration a number of bold ICT development initiatives, what do levels of computer and Internet usage actually look like in Azerbaijan? This blog underlines various contradictory statistics and seeks to provide a realistic measure of Internet and computer penetration among Azerbaijanis.
In March 2012, the State Fund for the Development of IT under the Ministry of Communications and Information Technologies (MCIT) was created by presidential decree. An additional presidential decree in November 2012 called for the establishment of a High Technology Park in Azerbaijan for the “preparation of new and high technologies, research in the field of energy efficiency, space and telecommunications, information technology and communications.” Concurrently, MCIT indicates that broadband Internet access has grown significantly since its inception in 2006, while also claiming that Internet access is, at least theoretically, available to all of Azerbaijan’s population given “the fact that mobile penetration in Azerbaijan exceeded 100%”. 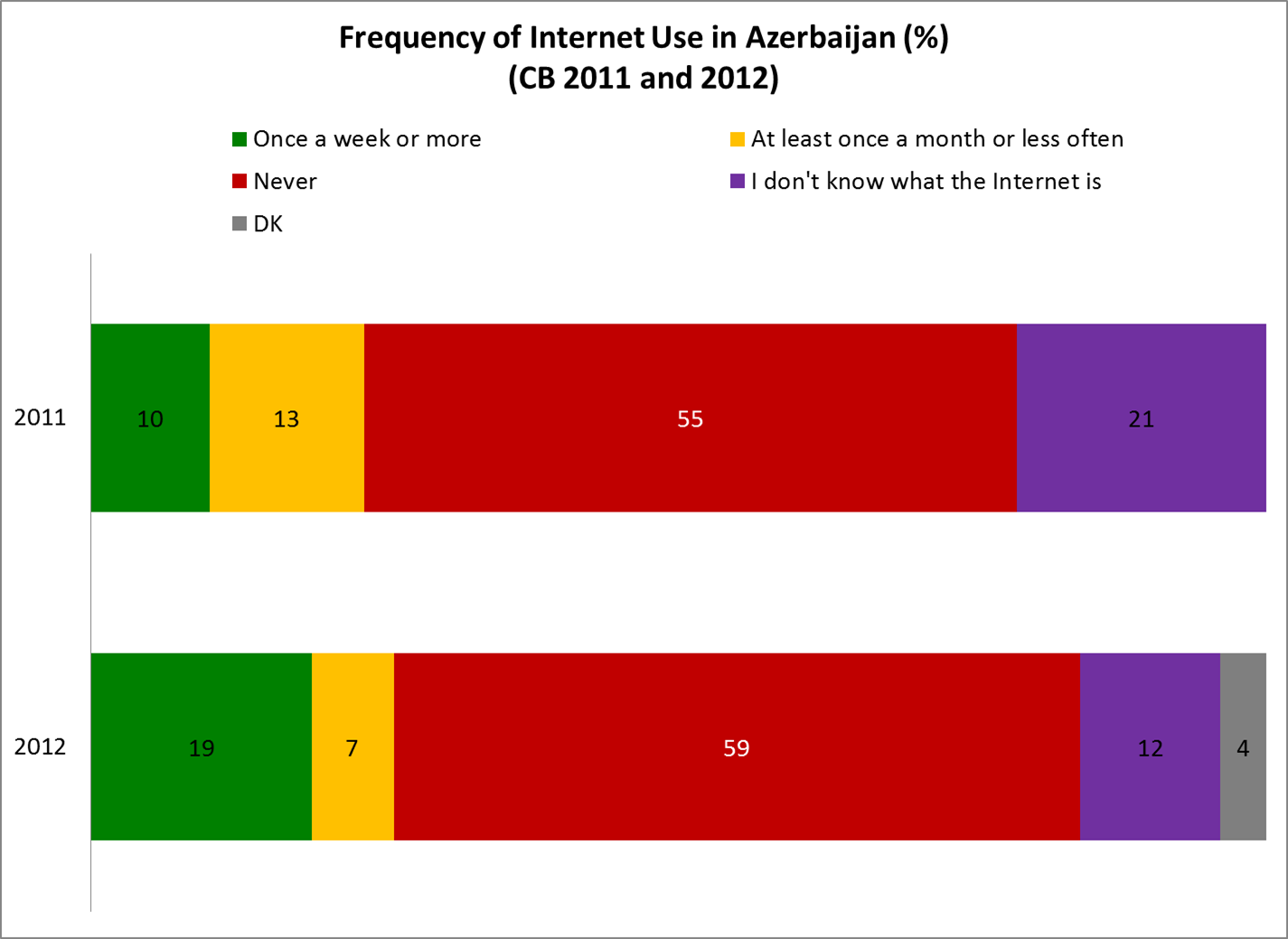 As a whole, CB data from 2011 and 2012 suggest significantly lower levels of Internet penetration in comparison to ITU and MCIT figures. 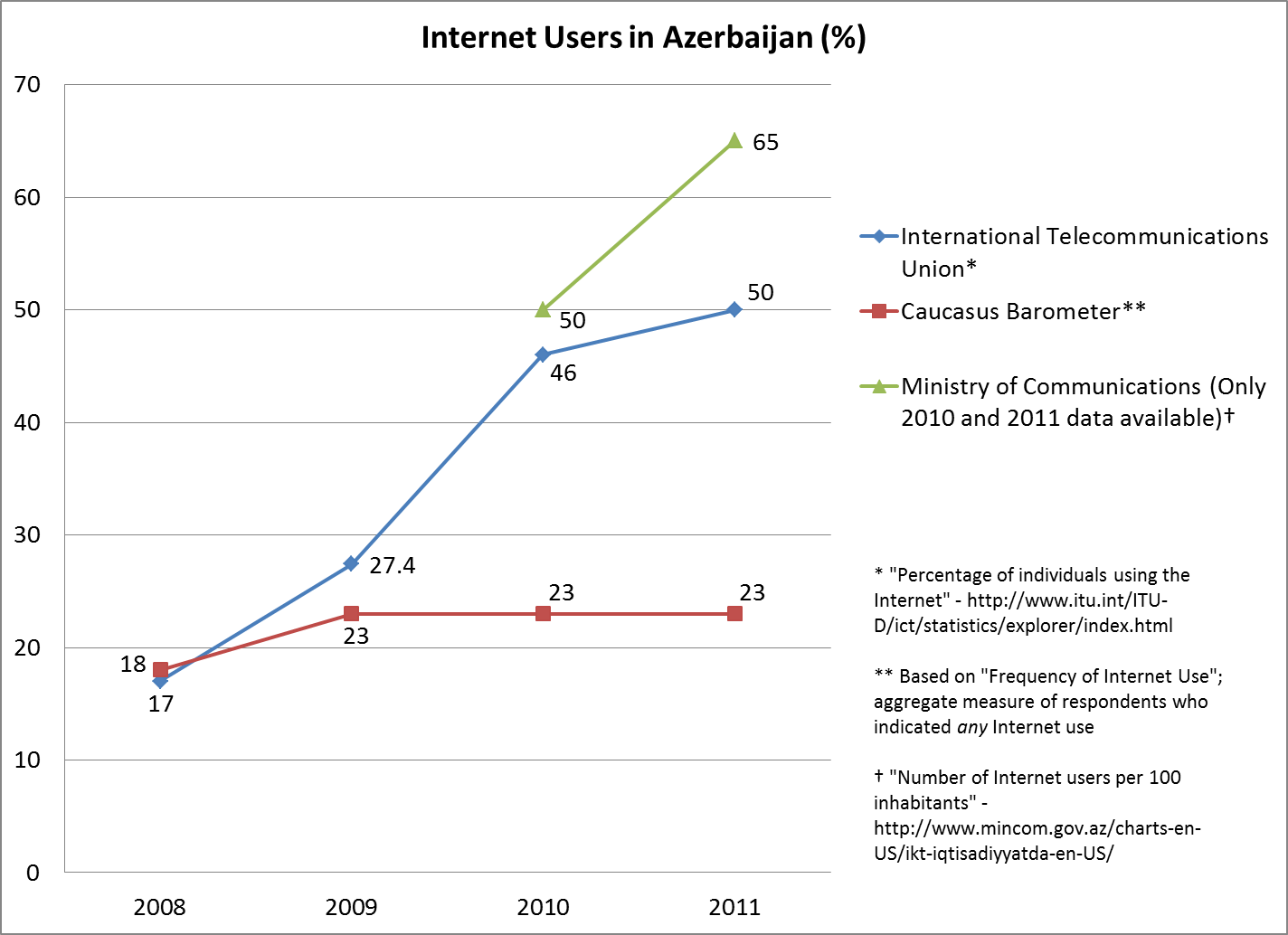 Regarding computer ownership, data from CRRC’s 2012 SocialCapital, Media, and Gender Survey (commissioned by SIDA) indicated that 25% of Azerbaijani households owned a personal computer. Out of those individuals who indicated household PC ownership, 73% claimed to have Internet access through a personal computer—roughly 18% of the population. These data are relatively consistent with recent Gallup data on home Internet access. According to Gallup’s 2011 Worldwide Tracking, 15% of Azerbaijanis had access to Internet at home, while 2012 polling indicated that the number had increased to 22%.

Data on Internet penetration and computer usage in Azerbaijan are obviously quite varied. Given that ITU and MCIT data come from similar sources, however, it seems reasonable that actual levels of Internet and computer usage are lower than statistics from official and UN sources.
It is apparent that Azerbaijan would like to develop its ICT sector through the implementation of high-profile, “supply-side” development initiatives. In addition to the State Fund for the Development of IT and the planned High Technology Park, the MCIT could possibly support its goals by encouraging increased computer and Internet penetration at the grassroots level. If more Azerbaijanis were made aware of the benefits of the Internet, it is conceivable that Azerbaijan may be able to develop a more Internet savvy population and in turn create the necessary human capital to support its ICT initiatives.

For more information on Internet and technology in Azerbaijan visit the new 2012 Caucasus Barometer dataset.
Tweet