This year an International Day of Happiness will be celebrated for the first time on March 20th. In 2012, the United Nations (UN) declared this day to be an official holiday to highlight the importance of happiness as a fundamental human aim and to call upon countries to approach public policy in ways that improve the well-being of their citizens. This aim was inspired by the Gross National Happiness Index which was developed in Bhutan to measure prosperity by gauging its citizens' happiness. The index measures the average economic, environmental, physical, political and social wellness of Bhutanese society based on survey data. Although this specific index does not exist in other countries, several surveys worldwide have asked how happy people consider themselves to be.The annual Caucasus Barometer (CB) asks people in all three countries of the South Caucasus, “How happy would you say you are?” The results reveal that Azerbaijanis have consistently evaluated their level of happiness lower than Armenians and Georgians within the past 3 years, although it has increased from 2010 to 2012. The level of happiness in Armenia has also slightly increased from 2010 to 2012, whereas in Georgia it has remained higher than in the other 2 countries. 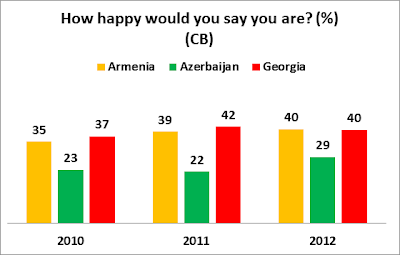 This question was asked on a 1 to 10 scale where 1=Not happy at all and 10=Very happy. The results shown here combine the responses for items 8, 9 and 10 on this scale.

Some think happiness is a result of high economic performance. Yet, this is easily refuted by looking at the Gallup’s 2012 list of “happiest nations” in the world which is topped by several relatively poor countries in South America and South Asia. Additionally, this analysis gives insight into people’s expectations about their well-being and finances in the coming year. This measure is called “Net Hope on Economy”. In 2012, Gallup asked 1,000 people in 54 countries if they feel that the next year will be a year of economic prosperity, economic difficulty or remain the same. Net Hope on Economy was calculated by deducting the percent optimistic (hopeful about economic prospects in 2013) from the percent pessimistic (those who see greater economic difficulty in 2013). The results show that Georgians rank #1 and Azerbaijanis rank #2 on this list of 54 countries, with the highest hopes of economic prosperity for 2013. Armenians ranked #22 with slightly more pessimists than optimists. 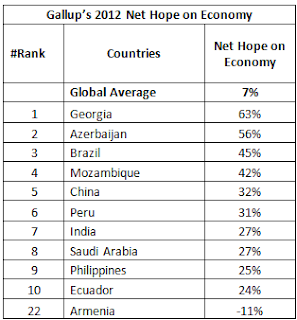 The CB 2012 also asks about future economic expectations, but specifically regarding children. Georgians, Armenia and Azerbaijanis were asked, “Do you think your children will be better off or worse off financially than you are when they are your age?” The results reveal that between two fifths to two thirds of people in the South Caucasus are optimistic. Georgians are the most positive, followed by Azerbaijanis and Armenians whose results are closer to each other. 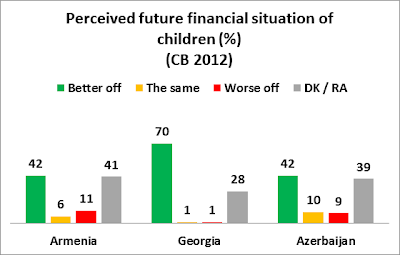 In this blog we aimed to show the pursuit of new measures of well-being and happiness. Some movements have embraced new ways of measuring prosperity through happiness or future expectations, thus showing that economic indices are not solely important. On the occasion of the first International Day of Happiness, we wish everybody to live up to their expectations and to achieve the underlying meaning of this day. Access the full Gallup report here and the CB 2012 here for more information on this data.