In the South Caucasus, the Enemy of my Enemy is my Friend


The three countries of the South Caucasus (Armenia, Azerbaijan and Georgia) are geographically, historically and politically bound closely together. Nevertheless, these countries often find themselves in disagreement when faced with broader geopolitical questions regarding alliances, threats and visions about the future of the region. These countries are often divided on a variety of issues, such as whether or not to join the Eurasian Union, to sign the EU association agreements, or how to vote on the legality of the independence referendum in Crimea. While the South Caucasus is certainly a region in a geographic sense, there is little evidence of a regional identity that could point towards a future of increased cooperation or cohesion. Instead, a case of ‘the enemy of my enemy is my friend’ prevails, splitting the region into supporters and adversaries of the countries across their borders, which has consequences for both trade and foreign policy. 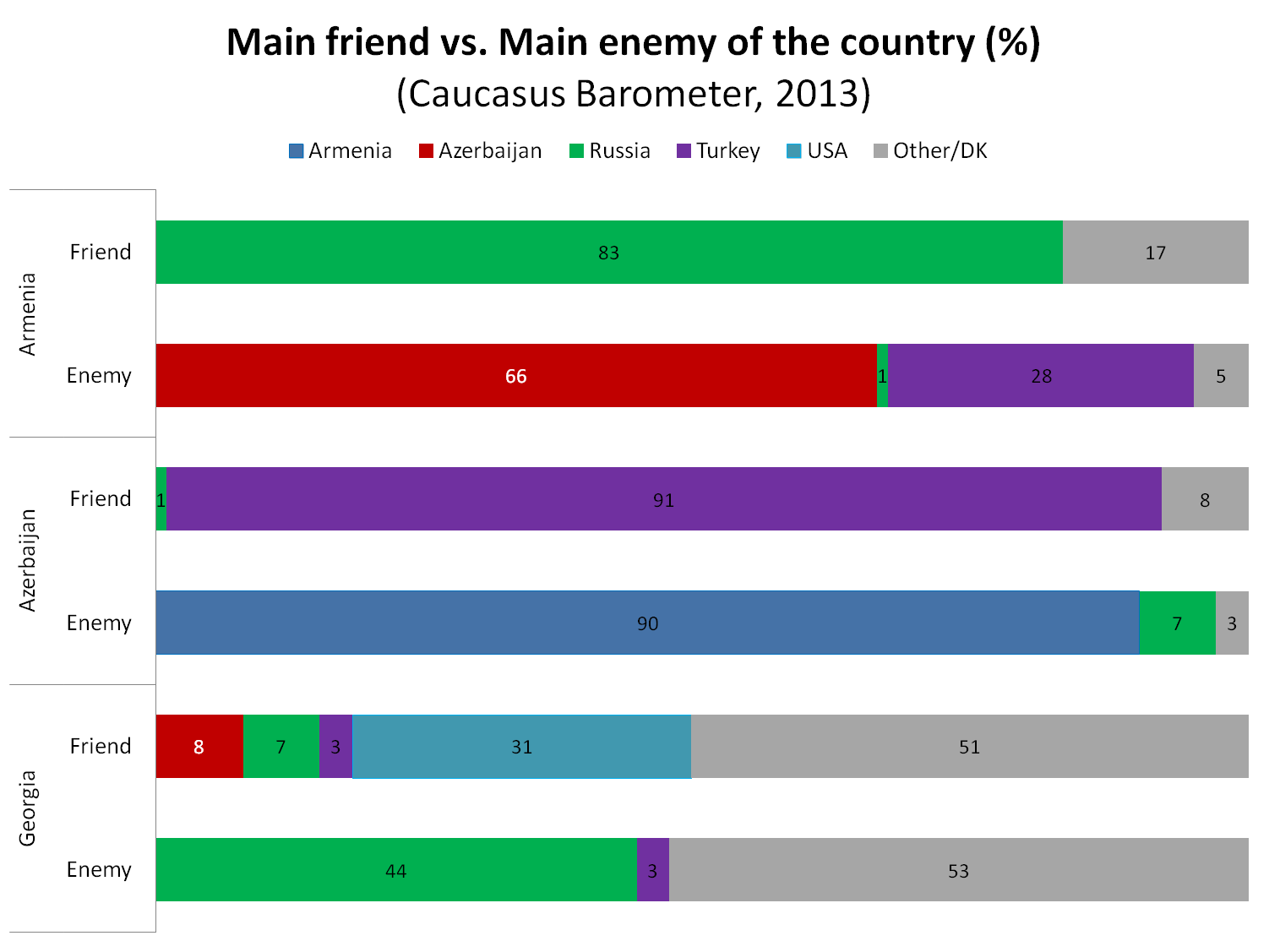 The majority of Armenian respondents to the 2013 Caucasus Barometer (CB) questionnaire named Russia as Armenia’s biggest ally (83%), while just under half of Georgian respondents named Russia as an enemy (44%), and 7% in Azerbaijan noted Russia as the main enemy of their country. A split can be seen in the case of Turkey, as most Azerbaijanis view Turkey as an ally (91%) and just over a quarter of Armenians view Turkey as an enemy of their country (28%).

The tension that characterizes cross-border perceptions in the region makes the borders themselves highly securitized spaces. Far from a free flow of people or goods, cross-border trade and travel is restricted between Georgia and Russia, Armenia and Azerbaijan, and Armenia and Turkey following a series of wars over disputed territories.

Nevertheless, perceptions of borders can ebb and flow throughout history. Administrative boundaries can become state borders, as in the case of the South Caucasus in the early 1990s, and state borders can become as open as administrative ones, such as in the European Union. Similarly, perceptions of neighbors can vary across different issue areas. While opinions and alliances in the South Caucasus are largely polarized, the will (if not the actual ability) to trade and interact on a commercial level yields a slightly less tense picture. Countries with a strong negative perception of other countries can be extremely reluctant to engage economically with that country. However, when positions are less polarized, the approval to do business is much stronger. 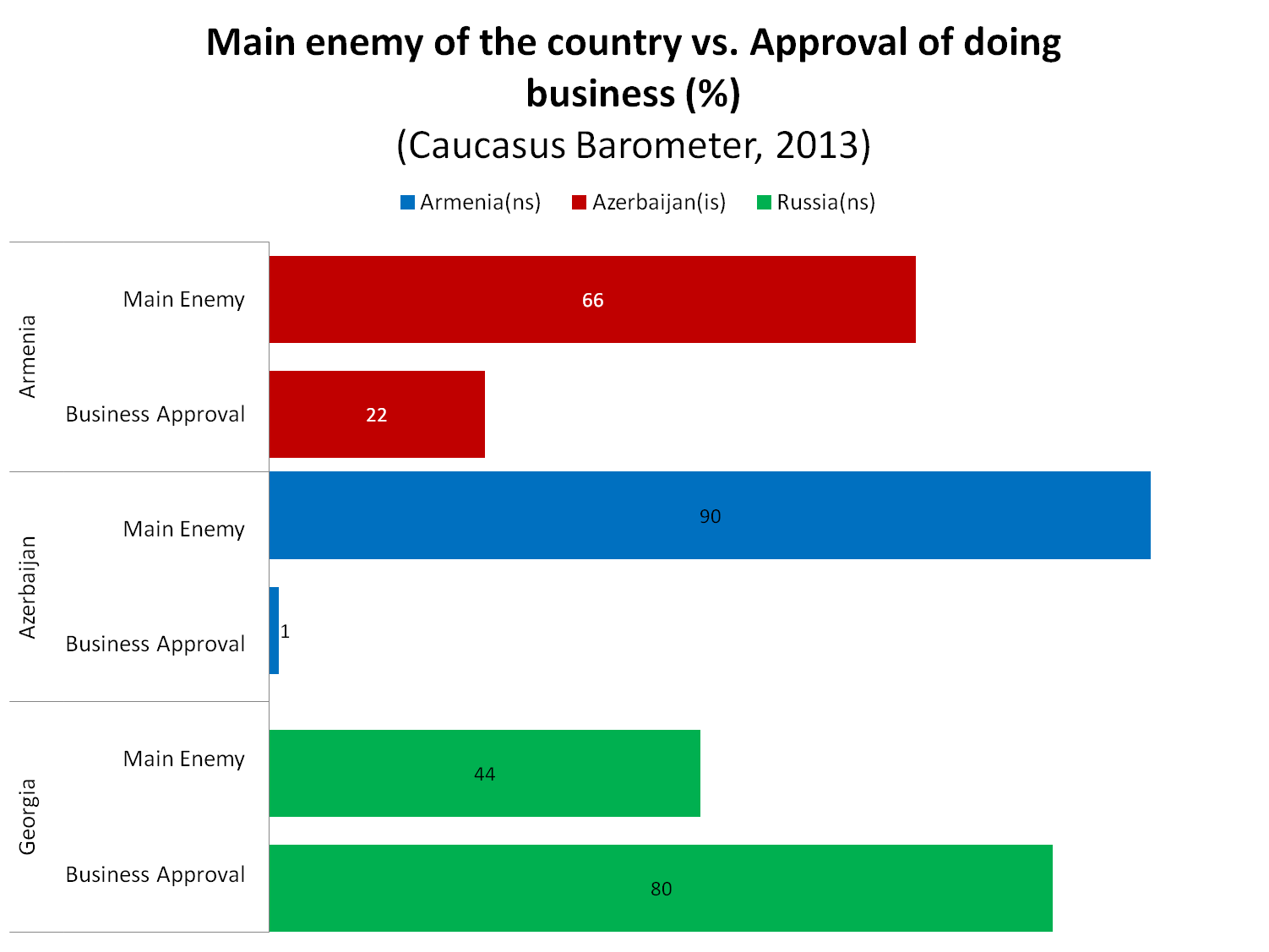 However, even though Georgian export dependence on Russia is relatively low at 7%, cross-border trade would almost certainly increase if trade were to become more feasible. While it is not clear from this data whether openness to trade is driving reductions in hostility or vice versa, it is an important reminder that the practical need to coexist has the potential to ease relations between hostile countries. In a region such as the South Caucasus where perceptions of others across borders are so polarized, seeking common ground such as the need for economic development could be a potential arena for cooperation. To explore more aspects of cross-border relations, visit the CRRC’s Online Data Analysis tool.
Tweet