The International Crisis Group (ICG) recently released an analysis of the current situation in South Ossetia. Although we normally focus on social sciences, we are happy to offer a quick summary.

ICG asserts that the conflict has entered a new phase, and not necessarily for the better. ICG believes Tbilisi is escalating tensions by refusing to engage with the de facto government in Tskhinvali and not allowing negotiations to continue without South Ossetia explicitly recognizing that it is territorially part of Georgia. According to ICG, Tbilisi’s actions, while not violent, are being imposed aggressively and unilaterally and as a result are estranging the South Ossetians.

ICG suggests Tbilisi engage with Tskhinvali and validate Ossetian ambitions and concerns rather than conditioning the negotiations on South Ossetia’s declaring it is part of Georgia. The South Ossetians have rejected Tbilisi’s discussions of territorial status but have cooperated on development and rehabilitation, confidence building, and demilitarization.

By way of background, South Ossetia has sought either independence from Georgia or reunification with North Ossetia, located within Russia, since 1990. After the Rose Revolution President Saakashvili made the restoration of Georgia’s territorial integrity a major priority of his new administration. Tensions peaked in the summer of 2004 and armed conflict erupted. Two rival governments emerged in November 2006 after there were parallel presidential elections and status referenda.

The de facto South Ossetian government of Eduard Kokoity is backed by Russia. The Georgian government is dismissive of Kokoity and is attempting to delegitimize him by declaring him a criminal. Kokoity’s administration on the other hand is suspicious of any Georgian peace initiative and believes it is only an attempt to appease the international community.

Tbilisi has endorsed the establishment of a temporary administration unit run by Dmitri Sanakoev who now has wide support from and leads the Georgian-controlled areas of South Ossetia. According to ICG, however, his actions have disaffected the South Ossetians. Sanakoev pledged allegiance to Tbilisi, and the Georgian government believes Sanakoev breaks Kokoity's monopoly and can therefore help to "unfreeze" the conflict.

In the zone of the conflict, the Tskhinvali district, villages inhabited by ethnic Georgians and Ossetian-inhabited villages are intermingled in nearby proximity of one another. What is worthy of note is that there is, however, no actual agreement on clear lines of delineation of control over the extended areas. The report shows two very different maps. The first is by the Joint Peacekeeping Force’s (a peacekeeping force of Georgian, Russian and Ossetian troops) map. 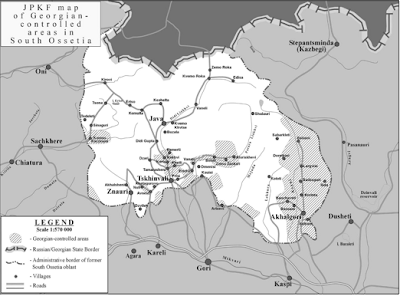 By contrast, the Georgian government’s map indicates a much larger swath of land under Georgian control. It is also much more cohesive. 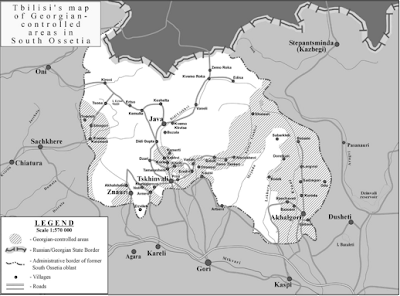 Again, maps themselves tell the story of two very different views colliding with each other.
Tweet