(We today noticed that we forgot to post this earlier -- apologies!)

The Heritage Foundation provides visitors with the 2008 Index of Economic Freedom, which covers 162 countries across 10 specific freedoms such as trade freedom, business freedom, investment freedom, and property rights. The 2008 Index provides an even clearer picture of economic freedom by using data-driven equations which allows countries to be graded between scores of 0 and 100.

According to the 2008 assessment, ’s economy is 55.3% free, which makes it 107th in the world. If we look at the distribution, falls into Mostly Unfree category.

has considerable challenges in Investment Freedom, Financial Freedom, Property Rights and Freedom from Corruption. Its overall score is insignificantly different (0.5% points) than the last year. is ranked 18th out of 30 countries in the Asia-Pacific region, and its overall score is below the world average. 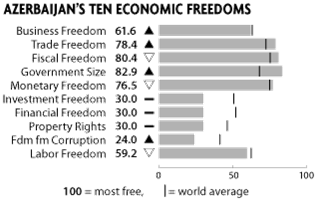 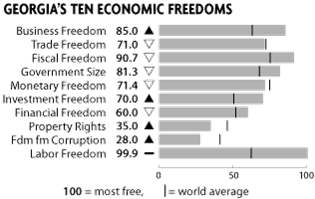 is in a much better situation than , having a 69.2% free economy, which makes it the world’s 32nd freest economy. Its overall score is 0.1% point lower than last year. Similar to , two categories remain significantly below the world average: Property Rights and Freedom from Corruption. Property Rights may reflect the 2006 and 2007 situation, in which old (illegally, as the government alleged) privatizations were rescinded. As for corruption, is the data really plausible? According to the CRRC Data Initiative (DI) 2007, only 1% of the respondents in say they had to pay a bribe in the previous year. 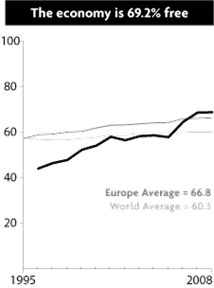 Moreover, is ranked 18th out of 41 counties in the European Region, and its overall score is equal to the regional average. For more info on , click here.

From the South Caucasus countries has the best score. It ranks 28th with 70.3% freedom, just narrowly beating Georgia. 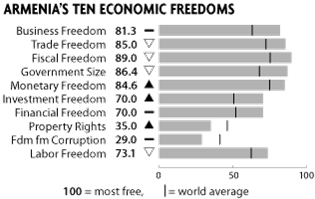 To view scores and rankings for any country, or to find out which are the top ten countries, along with detailed data and background analysis, click here.