Although the history and contextual background of volunteering in Europe vary from country to country, in most western societies, the development of volunteerism is associated with the emergence of civil society organizations, which appeared on the scene as a result of the crisis of the welfare state when governments could no longer manage to respond to the growing needs of society. Until the end of the 1990s the situation was different, though, in many socialist states, where the citizens were often forced to ‘volunteer’ for state controlled organizations. This practice had nothing to do with actual volunteering and would sometimes lead to human rights abuses. At the time, one of the common forms of this phenomena was ‘community service,’ e.g. organized cleaning of large public spaces, usually carried out on Saturdays (Shabatoba in Georgian). For many people living in socialist countries, it was an obligatory activity, often of a political character, and widely used by the state propaganda machine.

A number of recent studies argue that currently observed negative attitudes towards volunteering in some of the post-socialist societies are a consequence of Shabatoba and similar experiences (UNV, 2010; GHK, 2010; Ekiert and Foa, 2011). At the same time, there are other studies (UNV and UNDP, 2009) arguing that it is impossible to generalize any finding about how people felt and still feel about forced 'volunteering' practices.

Currently, attitudes towards Shabatoba-type activities are all but straightforward in Georgia. This blog post looks at how these attitudes differ by age, level of education, and previous volunteering experience, based on the findings of CRRC’s April 2014 Volunteering and Civic Participation in Georgia survey, funded by East-West Management Institute (EWMI) and the United States Agency for International Development (USAID).

According to the abovementioned UNV and UNDP 2009 study, if older generations tend to remember socialist era unpaid work programs with certain affection, for the younger generations, it is often hard to understand how such forced work could have been enjoyable. Considering this finding, one would expect younger Georgians to have less positive attitudes towards Shabatoba-type activities, compared to representatives of older generations. Surprisingly, however, the survey results show that representatives of different generations report quite similar attitudes towards potential forced ‘volunteering’ in today’s Georgia. The majority of Georgians of all age groups agree with the statement that “Georgia would be better off today, if the government forced us to volunteer,” although a slightly smaller share of young people (18-35 years old) agree with it, compared with those aged 36 and older. 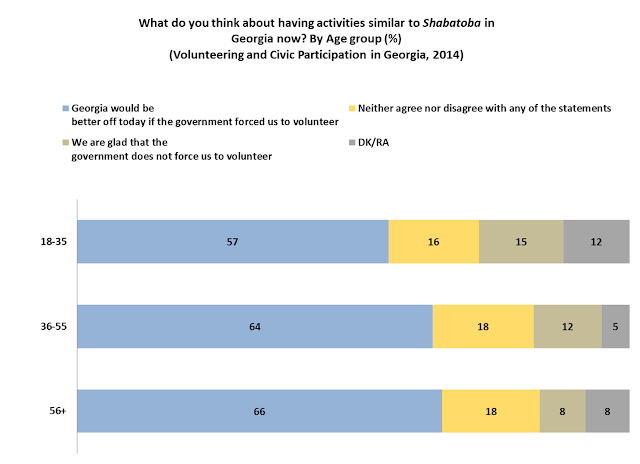 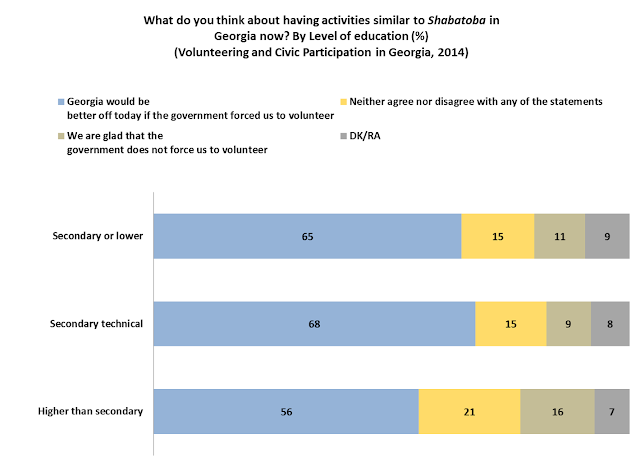 Notably and rather unexpectedly, those who have previously been engaged in volunteering (for example, have planted a tree outside their own property or have cleaned a public space) report slightly more often that Georgia would be better off today if the government forced citizens to volunteer, compared with Georgians who have not participated in such activities. 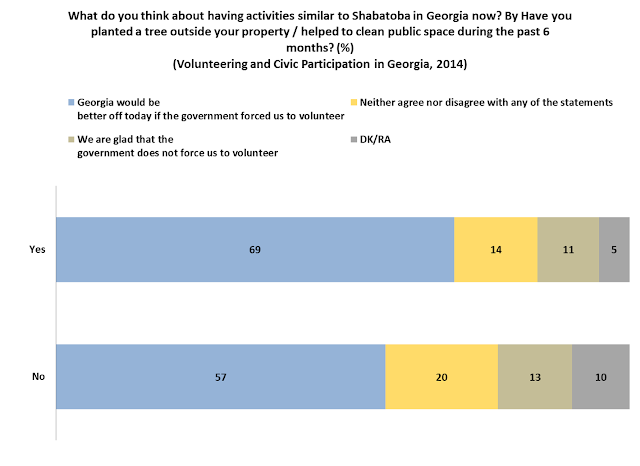 Note: A new variable was computed for this chart based on the questions, “Have you planted a tree outside your property during the past 6 months?” and “Have you helped to clean public space during the past 6 months?”  The answer “Yes” in the new variable means participation in at least one of the abovementioned activities, and “No” means participation in neither.
To sum up, the findings presented in this blog post are rather unexpected. The majority of Georgians think the country would be better off today if the government forced citizens to volunteer, and this attitude varies only slightly by age and level of education. Probably the most unexpected of these findings is that those with volunteering experience support this idea slightly more often than those who have not been involved in volunteering activities previously, and this correlation proves to be statistically significant, although relatively weak.