CRRC recently undertook a major study of Georgian media. On the blog, we will publish some small excerpts that have not made it into the main report (the link to these reports will be published on the blog). One aspect not covered in that much more detail is the Georgian view of their Public Broadcaster (GPB). The GPB, you will remember, is financed from the government budget, and the GPB is intended to follow the general principle of serving the broader public interest. So how does it do?

60 percent of Georgians say the receive news on politics and current events in Georgia from GPB at least several times a week. But the GPB is not the first news station on people's minds, with only 25 percent saying they usually turn to GPB for news and shows related to current events. GPB is more popular in rural areas, and among people that are actually reading newspapers. Age also seems to be a factor, as the slide illustrates. 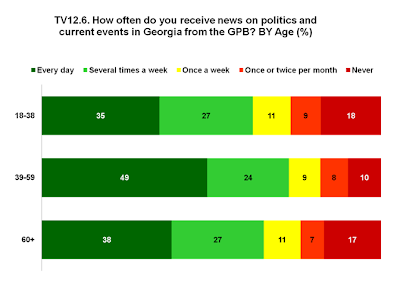 Trust levels in the news broadcasted on the GPB are not high, with only 26 percent saying they fully or somewhat trust GPB. 18 percent say they fully or somewhat distrust GPB. Significant amounts either say they neither trust nor distrust the news broadcast on the GPB (27 percent), or that they do not know (20 percent). Fifty-one percent believes the news coverage reflects the interests of the government, and 11 percent believed it reflected neither the interest of the government nor those of the opposition. (Twenty-six percent said they did not know, and 4 percent refused to answer.)