In several surveys , we have asked the question: "would you leave Georgia if you had the chance?" We believe that this question is a good measure to gauge people's perception of their current situation.

We wondered if perhaps another interesting way to get at the state of Georgians' attitude toward Georgia is to look at asylum applications. Since 1990, according to UNHCR data, 79,121 asylum application have been filed in Europe and North America. While this could equate to fewer that 79,121 people, since people could have filed multiple applications, the number is significant. While asylum applications before the Rose Revolution had been rising dramatically, they began to fall after 2004. 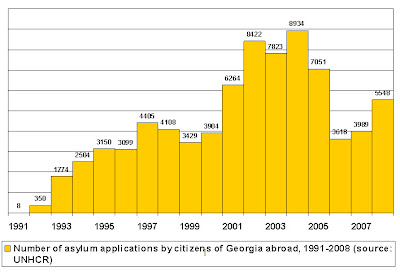 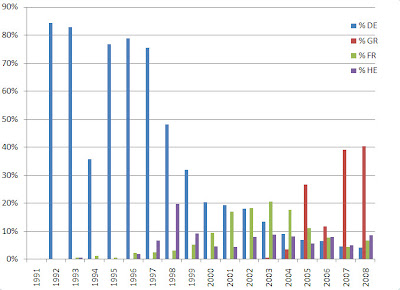 So what exactly does this tell us? As seen in the graph above, the locus of almost all asylum applications in Europe and the United States in the early 1990s were in Germany. BAMF, the German Office for Migration and Refugees was notoriously lax in the '90s and at one point Germany was getting 300,000 asylum applications a year. This lead to a controversial and difficult battle in Germany, which finally changed its asylum law and streamlined its processes. A new efficiency took hold. Whereas before, long backlogs had made it easy for migrants to work while their asylum cases was being processed (and generally rejected), a host of agreements and EU level legislation made it much easier for Germany to deport Georgians. As a result we see the dramatic decline in the percentage of Georgian asylum applicants placing claims in Germany.

Switzerland is seen as offering the best return package. It is commonly known among Georgian migrants that one should file an asylum claim in Switzerland to return back to Georgia. This may explain the constant, yet low level of Swiss claims.

The major change, however, is Greece. In 2007 and 2008, 39 percent and 40 percent of all asylum applications made by Georgians in either Europe or the US were lodged in Greece. The feminization of labor migration and Georgians connection to Greece through the large Pontic Greek community, which predominantly migrated to Greece, has led to large scale employment of Georgians in domestic care in Greece. However, why are the asylum applications jumping. One reason may be that Greece is cracking down on the visa overstayers and those not allowed to be in Greece (documenting unauthorized work is more difficult). If the asylum process is working slowly in Greece, then it may be a good opportunity for Georgians to have temporary leave to remain in Greece (i.e. be on Greek soil legally) and work under the table. However, we aren't sure and think more research into this would be worthwhile. Ultimately, it may be less a sign of increased dissatisfaction but more a result of changes in European Member States with regard to implementation of migration and asylum law.

Either way the results are fascinating.