Gallup: Azerbaijan is One of Least Religious Nations

According to a Gallup poll, Azerbaijan is considered to be one of the least religious countries in the world. Now, whereas this may be shocking news for those that perceive people in predominantly Muslim countries as devoted or even fanatical believers, those with experience of Azerbaijan probably would shrug their shoulders about this finding. But what exactly does least mean, and what causes the Azerbaijani lifestyle to be the most secular in the Moslem world? 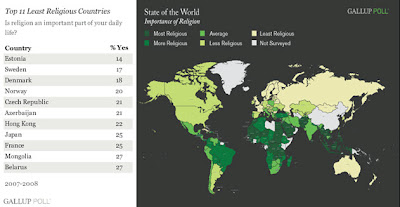 How does religiosity in Azerbaijan look according to CRRC Data Initiative (DI)? According to our dataset, 97,2% of Azerbaijani identify themselves as Muslims, although this does not mean that religion is practiced on a daily basis by all of them. 14% of the Azerbaijani respondents pray every day, 30% admit that they do so “less often” and 25% of the Azeri’s say that they never bow in the direction of Mecca.

How about practice of religion in Azerbaijan from a regional perspective? Indicators determining importance of religion in people’s decision-making show that neighboring Armenians attach the same weight to religion as the Azerbaijani. Georgians, on the other hand, indicate that religion plays a much more important role in their daily lives in contrast to its two neighboring nations. For a more elaborate cross South Caucasian comparison on religious practices, check out this previous CRRC blog post. 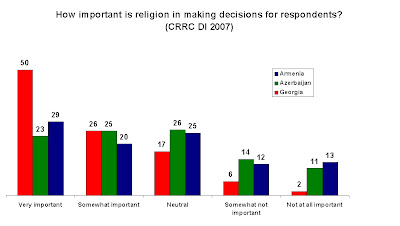 Our dataset can not provide a conclusive answer to the second question on why the Azerbaijani lifestyle tends to be secular to its nature. One could point to the effects that Soviet rule might have had on expression of religiosity or that Azerbaijani, in general, perceives Western concepts of secularization and modernization as ideals. However, the depth of Azerbaijan’s secularity has also a pre-Soviet history to it. The country’s own version of Islam, one that has been heavily influenced by Sufi mystics over the centuries, has contributed to the un-dogmatic interpretation of religious decrees that is characteristic for secular nations, such as Azerbaijan.

These are just some possible explanations to the state of religiosity in Azerbaijan. If readers out there have other opinions, insights or critique on this issue, please comment!