Funding for Healthcare in the South Caucasus

Government expenditure on healthcare can be an indicator of a government's commitment to the health of its citizens. It is also important for the sustainability of health programmes. Nevertheless, the total health expenditure in all three countries of the South Caucasus is dominated by private spending, including prepaid plans and “out-of-pocket” (on the spot) payments. This blog provides a brief overview of the patterns of government spending on healthcare in the South Caucasus during recent years. The blog also links these patterns to data from the 2012 Caucasus Barometer (CB) about assessments of health, satisfaction with health, and trust in the health system.
Total expenditure on health as a percentage of GDP provides information on the level of resources invested in health relative to a country's overall wealth. In developed countries, government spending on healthcare accounts for approximately 10% of gross domestic product (GDP) or more. This percentage of resources pooled by the government is comparatively lower in the South Caucasus. It accounted for as much as 9.9% of the total GDP in Georgia, 4.3% in Armenia and 5.2% in Azerbaijan, according World Health Organization data from 2011. 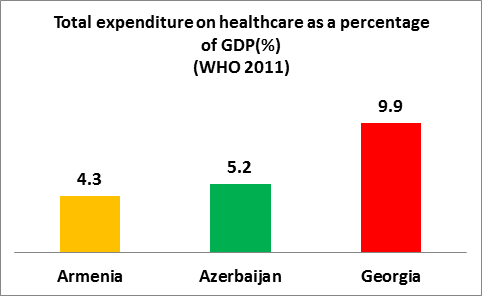 Total expenditure on health is distributed between private and government expenditures, which are also unequal across the globe. In more than half of low income countries, government expenditure on health is less than 50% of total health expenditure. Where health spending is comparatively lower in general, the shortfall is made up by private spending. This can also be observed in the South Caucasus where the private amount paid for health services dominates the expenditure (reaching around 78% in Georgia and Azerbaijan, and more than 64% in Armenia). Most of the private expenditure on health in all three countries is so-called “out-of-pocket” – made by patients to both public and private providers at the time of receiving health services. Despite the fact that this method of payment can result in financial catastrophe for individuals or households, in each country in the South Caucasus “out-of-pocket” expenses amounted to 89% of total private expenditure on health. 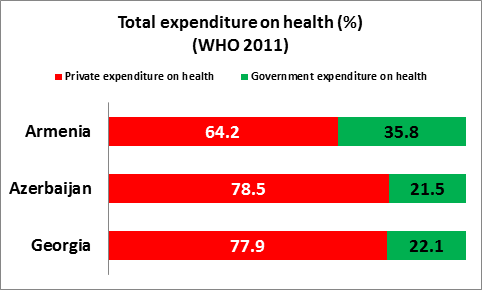 Despite more substantial budgetary allocations to citizens’ healthcare by the government in Georgia, compared to  Armenia, the CB shows that trust in the healthcare system in these two countries is almost the same (39% and 38%, respectively-“Fully trust” and “Somewhat trust” combined). Azerbaijanis’ trust in the healthcare system is the highest among the three countries, amounting to 51%. Considering the self-evaluation of one’s health, around half of the adult Azerbaijani population rates their health as good or very good. Again, this rate is lower in Georgia and Armenia, where only about one-third of these societies think they have good health. Interestingly, these numbers are again similar despite the fact that the Armenian government has larger health expenditure than the Georgian government. 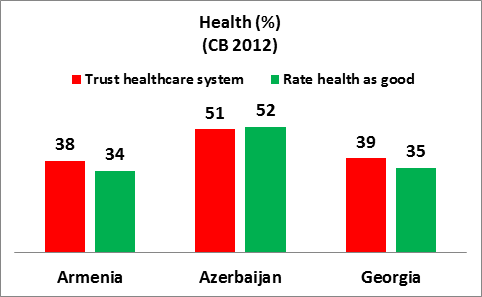 Private expenditure still dominates the healthcare expenditure in the South Caucasus. Given that large parts of these populations are poor and cannot afford to spend much on healthcare, low levels of government spending on health might have an impact on the health of citizens. Nevertheless, a higher share of government health expenditure does not necessary directly influence the quality of a healthcare system, or an individual’s level of trust or self-assessment of health. Thus, other factors ought to be taken in consideration such as evolving purchasing power parity, the general price of healthcare, or remittances.
For more information on this topic, you are welcome to visit our Caucasus Barometer database.

Roads and Safety in the South Caucasus

According to the World Health Organization (WHO), every year about 1.3 million people die as a result of road accidents worldwide. In 2011, the UN launched the Decade of Action for Road Safety 2011-2020. A year later, the UN General Assembly adopted Resolution A/66/L.43 to improve road safety conditions wo...
04.03.2014 | Tuesday

Health in the South Caucasus

With the recently concluded Olympics in Sochi and the controversies surrounding them, one might be interested in understanding how populations in the South Caucasus think about health and sport. What factors are related to perceptions of health in Armenia, Azerbaijan and Georgia?
13.05.2014 | Tuesday

According to the World Health Organization (WHO), “Multiple social, psychological, and biological factors determine the level of mental health of a person at any point in time. In addition to the typical life stressors common to all people, older people are more likely to experience events such as bereavement, a drop in socioeconomic status with retirement, or a disability.”
28.05.2014 | Wednesday

Smoking in the South Caucasus and tobacco policy in Azerbaijan

May 31st is World No Tobacco Day as declared by the United Nations. According to the World Health Organization (WHO), tobacco usage is the primary reason for chronic diseases including “cancer, lung diseases, cardiovascular diseases” among other diseases.
27.10.2014 | Monday

Don’t worry, exercise, and be happy

According to a report by the World Health Organization, blood donations in Georgia fall below the estimated need for patients. Approximately 60,000 donations are necessary per year to cover Georgian patients’ needs, while the number of actual blood donation does not exceed 37,000. Moreover, 95% of blood donations come from paid donors.
07.06.2011 | Tuesday

Conference on Social Protection and Social Inclusion in Armenia, Azerbaijan and Georgia

The South Caucasus Social Protection and Social Inclusion regional conference was held in Tbilisi, Georgia on May 19th and 20th. Both the CRRC-Armenia and CRRC-Azerbaijan offices presented country reports on these issues.
29.09.2008 | Monday

Vouchers for Childbirth | A Field Study

CRRC fellow Simon Gabrichidze and his research partner Tamar Trapaidze evaluated the implementation of a newly launched State Assistance Program (SAP) by the Ministry of Labor, Health and Social Affairs aimed at providing better health services for people living under the poverty line in the Samegrelo and Adjara regions.
05.12.2006 | Tuesday

Reproductive Health in the Caucasus

According to a 1999 Reproductive Health Survey, Georgia has the highest abortion rates in the former Soviet Union (possibly in the world, though I haven't checked). In Georgia there are 3.7 abortions per woman (per life).
11.12.2006 | Monday

Rashida Abdullayeva examined a curious relic from Cold War days: in Gabala, Northern Azerbaijan, there is a giant radar station, which is leased out to Russia until 2012. According to reports citing the Russian Ministry of Defence the radar station has a range of up to 6000 km, was designed to detect missile launches from the Indian Ocean, and hosts around 1200 Russian servicemen.
21.01.2019 | Monday

Georgia’s state budget amounted to GEL 12.5 billion in 2018.  The Ministry of Labor, Health and Social Affairs; Ministry of Regional Development and Infrastructure; and Ministry of Education and Science had the largest appropriations at 28.2% (GEL 3.528 billion), 14.5% (GEL 1.815 billion), and 9.5% (GEL 1.186 billion) of the budget, respectively. In the 2018 June CRRC/NDI survey, respondents were asked, “What are your top three priorities for spending, understanding it means cutting elsewhere?” Respondents were provided with a show card and allowed to name up to three answers. This blog post looks at whether responses match up with actual spending, and how priorities vary among different demographic groups.
04.11.2019 | Monday

Perceptions of healthcare quality in Georgia

Affordable healthcare remains one of the main national issues for people in Georgia: 18% of people considered it one of the most important issues in the July 2019 CRRC and NDI survey. The salience of this issue was at its highest in 2012 (35%), and has decreased over the years, particularly in light of the passage of the universal health insurance program. Nonetheless, affordable healthcare remains one of the most important issues for the public and particularly the cost of medicine, which is one of the three largest costs for over a third of families in Georgia. In this regard, it is unsurprising that over half of the population name the cost of medicine or the cost of care/doctor visits as the largest ones facing the healthcare system in Georgia. The second most common issue, which 24% of respondents named on the question about issues in the healthcare system, was a concern over the lack of professionalism of doctors and medical personnel, something associated with the quality of care.
27.04.2020 | Monday

Who trusts the healthcare system in Georgia?

Trust in healthcare institutions is important, especially during a pandemic like the current COVID-19 outbreak. In the name of public health, numerous individual freedoms and economic activities are restricted.

Many experts believe that to fully remove the restrictions which have emerged because of the COVID-19 crisis, a vaccine is needed. While vaccines are only expected in the medium term, if and when they are available, Georgia may face large challenges with implementing a large scale vaccination program.

Lockdown vs re-opening the economy in Georgia

As the number of new daily confirmed cases is again on the rise, we look at how people felt about the anti-coronavirus restrictions in May.

Aside from the public health situation, COVID-19 has led to rising unemployment, reduced incomes, and food insecurity in Georgia. As the number of new daily confirmed cases is again on the rise, the Caucasus Datablog takes a look at how people felt about the anti-coronavirus restrictions when they were at their height.

Georgia among worst in the world for vaccine hesitancy

Scientists agree that global mass immunisation against COVID-19 is the only pathway to putting the virus under control. Yet, the World Health Organisation has argued that actually getting people to take vaccines is ‘an unprecedented challenge’, which might undermine mass immunisation efforts.
New data suggests that the Georgian public is among the least interested in getting a vaccine globally, given available data.
06.04.2021 | Tuesday

Drug prices as big a concern as COVID-19 for Georgians

In the December 2020 NDI and CRRC-Georgia survey, respondents were asked what the largest issue facing the healthcare system was. They were allowed to name up to three issues. The most commonly named issues were the cost of medicine (46%), access to hospitals due to COVID-19 issues (16%), and other COVID-19 related issues (25%).