Freedom House has just released its Freedom in the World report, for the year 2008. The report quantifies political rights and civil liberties. Civil liberties reflect four components: freedom of expression, associational rights, rule of law, and individual rights. Political rights focuses on three main components: electoral process, political pluralism and functioning of government. These indicators are then taken together to determine whether a country is free, partly free, or not free. 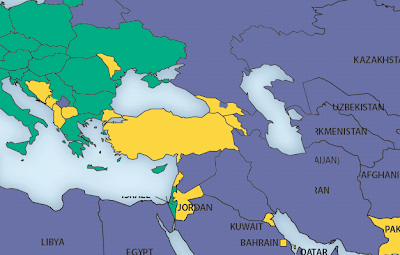 On civil liberties, Azerbaijan is also ranked as 5. That puts it squarely in the Not Free category, with the same scores as Russia. The overall map captures the context.

Painfully, Georgia has been removed from the list of electoral democracies. Yet this maybe does not mark quite the change that some people suggest: previously, Georgia was trading on the hopes that elections would work just fine. 2008 provided a hard test, and there was some (ultimately) unsurprising reverting back to old forms of managing things.

A more detailed look shows that Georgia already received a significant downgrade last year, when its 2007 performance brought it down from 3 to a score of 4 on both political rights and civil liberties. Time, maybe, for the government to do its homework in building institutional checks and balances (as they have said they would) but also for the opposition to get off their soapbox to make themselves relevant to the political process.

Generally, when looking at the methodology, we found it broadly plausible. Sure, we could always quibble with details (are political rights and civil liberties always as correlated as Freedom House suggests?) but it's a reasonable way of making the state of freedom comparable across the world.

Check out the website for detailed maps, a good essay summary, some (horrible) pie charts. You want to know how Freedom House rated General Pinochet in the 1970s? Check the comprehensive Excel sheet giving you the scores over time.