Education in Azerbaijan: A Snapshot

According to last month’s World Bank Azerbaijan Partnership Program Snapshot, there is an increased sense of urgency in Azerbaijan for long-term reform of the country’s education system. In its one-page education summary, the report describes Azerbaijan’s high primary school enrollment but details three important concerns: 1) low preschool enrollment, 2) low participation in higher education, and 3) an overall low quality of education.
According to Azerbaijan’s State Statistics Committee, only 16% of children between the ages of one and five attended preschool in 2012. However, there is a large gap in preschool attendence between urban and rural areas; in urban areas 23% of children aged 1-5 attend preschool, while this figure is 8.6% in rural areas. 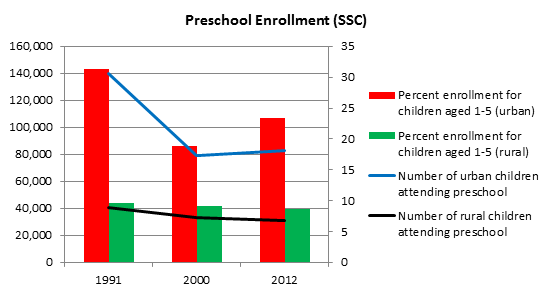 Created with data from the State Statistics Committee
The World Bank reports a slightly higher preschool enrollment rate in Azerbaijan at 27%, while the 2011 PIRLS-an international reading assessment study- reports that 36% of Azerbaijani fourth grade children attended preschool. Azerbaijan has one of the highest percentages of children without a preschool education among the 45 countries included in the PIRLS study. 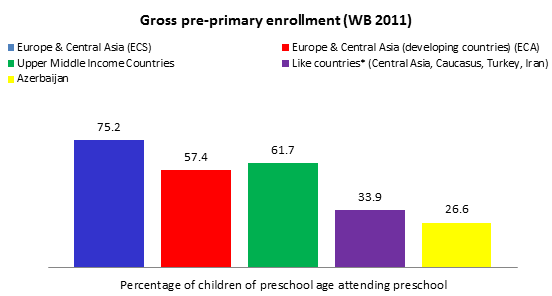 *All data is from 2011 except the “Like countries” category which uses the latest available data from each country. (This was 2011 for all countries except 2012 for Kazakhstan, 2008 for Georgia, 2010 for Turkey, and Turkmenistan is not included because there is no data). Created with data from the World Bank. Downloaded from  http://data.worldbank.org/indicator/SE.PRE.ENRR/countries?display=default.
Low rates of preschool enrollment in Azerbaijan are particularly puzzling because Azerbaijan is also an upper middle income country according to the World Bank, yet it has a much lower preschool enrollment rate than many other upper middle income countries. Additionally, most Azerbaijanis place high value on preschool education. According to the the 2011 Caucasus Barometer, 85% of Azerbaijanis agreed that kindergarten is an important part of a child’s development. 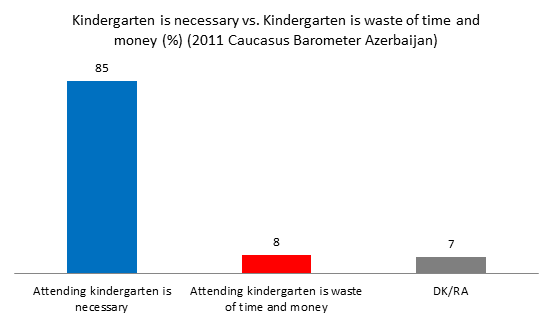 The Caucasus Research Resource Centers. (2011) “Caucasus Barometer". Retrieved through ODA - http://www.crrc.ge/oda/ on {May 2, 2013}. Available at http://www.crrc.ge/oda/?dataset=17&row=176
However, nearly 100% of Azerbaijani children attended primary school (grades 1 to 4) in 2011 according to Azerbaijan’s State Statistics Committee. This puts Azerbaijan on pace to achieve full primary school enrollment which is the major educational metric tracked by the Millennium Development Goals. World Bank data corroborates high primary school enrollment rates, but suggests that a small proportion of children (4%) may not attend school at all. The gap between gross and net enrollment suggests that some children attend primary school outside the suggested age range— they either enroll late or finish late.
Primary School Enrollment in Azerbaijan

World Bank data on gross enrollment, net enrollment, and primary completion rate (male and female).State Statistics Committee education data. *For a full explanation of gross and net enrollment see this helpful post by Friedrich Huebler.
According to the World Bank, Azerbaijan’s university enrollment rate is 20%— the second lowest in the CIS region and well below the averages for Europe and Central Asia, for upper middle income countries, and for “like countries” in Central Asia and the Caucasus. In fact, within the CIS only Uzbekistan (and possibly Turkmenistan but there is no data) shows a lower percentage of students attending university than Azerbaijan (9%). 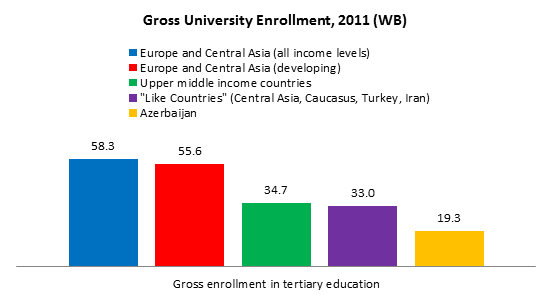 Available: http://data.worldbank.org/indicator/SE.TER.ENRR/countries?display=default.
Nevertheless, enrollment figures are increasing. The percent of secondary school graduates who have been accepted to university has risen from 21.7% to 27.4% since 2010. The number of students enrolling in university each year has risen 16% over the last three years, even though the percent of applicants has remained relatively constant at 60%. This means that more applicants are being accepted.

State Students Admission Commission (SSAC) data compiled from annual reports available at http://www.tqdk.gov.az/az/statistics/.
Despite the fact that the ‘success’ rate for university applicants has risen by over 24% in the past three years, score distributions from the 2010-2012 State Students Admissions Commission university admissions exams show slightly decreasing scores during this time period. A possible explanation for the increasing number of students accepted with lower scores is that the test is becoming more difficult while the university admissions cut-off for lower scores has become more flexible. 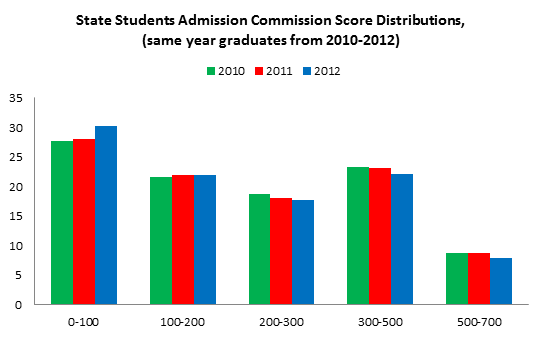 State Students Admission Commission (SSAC) data compiled from annual reports available at http://www.tqdk.gov.az/az/statistics/
Although Azerbaijan’s education system is making strides, there is still a lot of work to be done to create an inclusive system that provides opportunities for all children, and which develops Azerbaijan’s human capital. Azerbaijan’s spending on education has increased from 1.2 to 1.4 billion AZN between 2010 and 2012, but this is a decrease from 10% to 8.8% of the state’s total spending (because overall state spending has increased by a much higher percentage). Spending on education is currently 3.5% of the GDP, and while education spending is not considered to be a good indicator of education quality, the overall downward trend of social spending on education might be a problem.


Contributed by Vitaly Radsky from the Center for Innovations in Education Policy Unit, and former CRRC International Fellow