Different Perceptions of God in the South Caucasus

The Association of Religion Data Archives (ARDA) commissioned several new questions about religion and religiosity in the 2012 Caucasus Barometer (CB). The questions show similarities and differences regarding perception of God in Georgia, Armenia and Azerbaijan. Some of the questions asked in the CB were similarly to those in Chalfant’s 1993 study of “Images of God” in which he examined “experiences of sacred” among Protestants and Catholics. In his survey, Chalfant asked respondents to provide adjectives such as judge, lover, healer, friend and liberator for images that come to their mind when they think about God. His results showed that Catholic men most commonly identified God as a liberator, while Protestant men most commonly identified God as a healer. This blog discusses two similar questions in the South Caucasus.
ARDA’s project examining religion and religiosity in several countries around the world included Georgia (84% Georgian Orthodox, 10% Muslim), Armenia (95% Armenian Apostolic), and Azerbaijan (60% Shia and 30% Sunni). With these different religious contexts in mind, the 2012 CB specifically asked about adjectives or statements that people in these three countries associate with God. Specifically, the CB 2012 asked people to indicate which adjectives they felt described God (e.g., distant, wrathful, ever-present, loving, forgiving and punishing).  The majority (81%-96%) in all three countries say God is forgiving, loving and ever-present. Around a third of Georgians and Azerbaijanis describe God as distant and wrathful, while a much greater percentage of Armenians 78% and 56%, respectively, say the same. 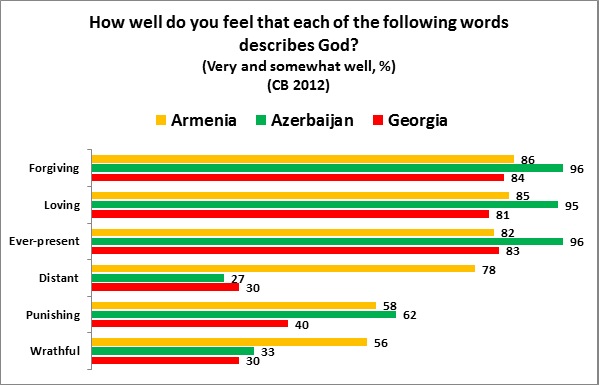 The CB also asked about statements that people might associate with God. Georgians and Azerbaijanis similarly feel that God shows the difference between right and wrong (77% and 78%, respectively) or that God rewards the faithful with major success (76% and 80%, respectively). To add, Armenians and Georgians have similar perceptions that God punishes sinners with terrible woes (50% and 49%, respectively) and is direct involved in their private affairs (62% and 67%, respectively). 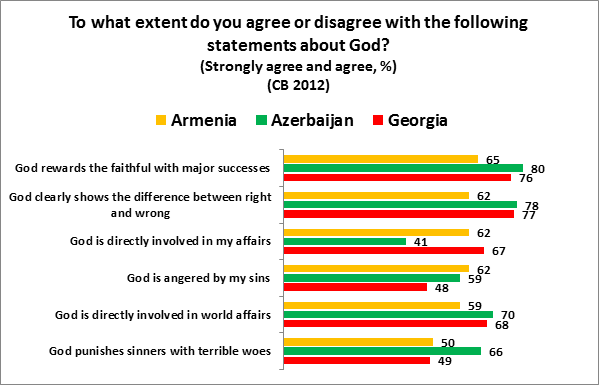 The fact that Azerbaijanis are less likely to think that God is directly involved in their affairs is interesting, especially if we consider the conclusions drawn from a previous blogwhich shows that private religiosity and a personal relationship with God are becoming more important for Azerbaijanis (although religious attendance remains low and trust in religious institutions is moderate).
This blog has compared a few new questions about people’s thoughts about God in the South Caucasus. The results show that the majority of people in all three countries describe God using positive adjectives such as loving, ever-present and forgiving although the three populations have different predominant religions. However, there are clear differences between Georgia and Azerbaijan on one hand and Armenia on the other with regard to descriptions such as wrathful and distant. Further analysis and open-ended questions would be recommended to explore the meanings behind these similarities and differences.
You can further explore the 2012 CB and data on religion and religiosity at http://www.crrc.ge/oda/?dataset=20 or http://www.crrc.ge/oda/ for previous 2011 data on the Online Data Analysis Tool (2012 data to follow on the ODA).