Christian Welzel, Professor at Jacobs University in Bremen and Vice President of the World Values Survey (WVS), held a lecture on his findings at the Tbilisi State University on the 23rd of January. The World Values Survey has conducted five waves of surveys from 1981 to 2007. In total, this has given them coverage of 90 % of the world’s population and representative national data for 97 societies. The data of WVS gives a general position on values for surveyed societies, indicates the direction of trends and illustrates their subsequent impact on social, political and economic life. 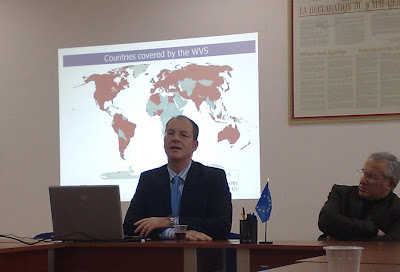 Here are some interesting points of the lecture:

The lecture included a presentation of an updated “global culture map” (similar to the previous Inglehart-Welzel map, shown below). Christian Welzel explained the two sets of dimensions that make out the axis’s that creates an illustration of how the general worldviews between cultural regions differ. The South Caucasian countries are juxtaposed in the “Ex Communist” cultural sphere. In spite of all their differences, the South Caucasus countries are tightly packed together (note that this is mid-90’s data though, and that Welzel's newest map is a little different).

The Traditional vs. Secular-rational values axis reflects importance of religious values, i.e. on issues such as deference to authority, divorce, abortion etcetera. The Survival vs. Self-expression axis is, other than a scale for economic development, an indication on how much individuals in a given society can concentrate on self expression values that gives priority to issues, such as, tolerance, gender equality and decision-making in economic and political life.

As regards the World Value Surveys data for the South Caucasus, one can not track changing trends in the region since it has only been included in one of the wave of surveys (1994-1999). However, good news: the Eurasia Partnership Foundation (CRRC’s mothership) has sponsored data to be collected in Georgia in 2008. We will let you know as soon as the data is available.

A journalist's account of the lecture is here. Want to investigate the works of the World Value Surveys, access other graphs or conduct you own online analysis? Click here.