Cell phones seem to have become indispensable in the West. The number of cell phones in the UK, for instance, has already exceeded the number of its people. Throughout the world, the total amount of cell phone owners increases every year.

So how does this trend look in the South Caucasus? It appears that more than half the adult population across the three countries already owns a mobile phone. Furthermore, the South Caucasus is one of the top growing global regions for usage of mobile phones since the percentage of cell phone users has grown faster than in the nominally largest growing markets of Brazil, Russia, India and China (the BRIC countries).

The CRRC Data Initiative (DI) indicates that the number of mobile phones per household in Azerbaijan reached 76 % in 2007, the highest percentage in the region. Armenia followed up on second place with 70 % cell phones per household and Georgia came on third place with 61 %.
As for the distribution across the country, there are (predictably) more phones in the capitals than in the countryside, as shown below in the chart.
However, recent growth has been particularly pronounced in rural areas. This has decreased the cell phone ownership gap between rural and urban areas. For example, rural Azerbaijan went from having cell phones in 32 % of households in 2006 to 64 % in 2007, a doubling of numbers in a single year. Rural Armenia increased from 47 % in 2006 to 66 % in 2007, an increase of nearly 20 % in a year, and rural Georgia reached the 50 % level in 2007 from having had 38 % the previous year, which still is a 12 % increase. 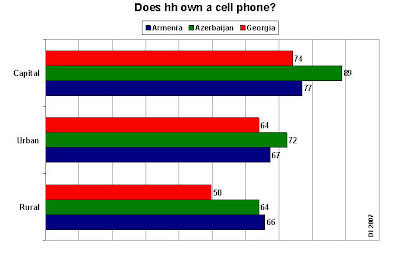 For a refreshing anthropological view on mobile phone usage in developing countries, in the New Scientist, click here.
Want to investigate this topic further? Check out our datasets!