Caucasus Currencies against the US Dollar

How have Caucasus currencies developed against the dollar? This question is not entirely trivial, since significant parts of the local economy are dollarised. Some colleagues, for example, have their salaries denominated in dollars. 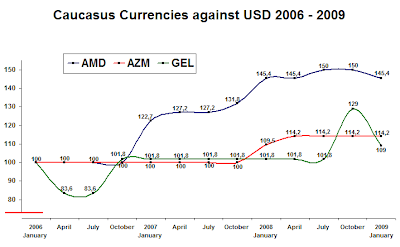 As the above chart shows, the Armenian currency appreciated quite sharply against the dollar. The other currencies also appreciated, but remained a little more stable. How to interpret this? We turn to EBRD's 2008 Transition Report.

With Azerbaijan, the report tells us that in "an attempt to slow imported inflation and reduce the impact of the weaker dollar on domestic inflation, the NBA [National Bank of Azerbaijan] switched the targeted currency from the US dollar (effective peg) to a currency basket that currently comprises 70% US dollars and 30% euros." (p. 101)

Georgia, the Transition Report notes, has also pegged and defended its currency, trying to keep it stable; as a result "international reserves fell from 1.5 billion USD to 1.04 billion USD at end-September 2008" (p. 129). The EBRD report does not note anything on Armenian exchange rates, except for a continuing consumer price inflation of just below 12%, annually (August 2008).

Over the next few months, exchange rates are going to be one of the issues to watch. Large fluctuations could make life more difficult. In Azerbaijan, the EBRD suggests that "real exchange rate appreciation (through either nominal depreciation or higher inflation, or both) is inevitable. A tighter fiscal policy will be necessary to control inflation of the medium-term." (p. 101)

And on Georgia: "Given the still high level of dollarisation in the banking sector (more than 60% of lending is in foreign currency), a possible depreciation of the currency would affect the quality of banks' portfolios as the repayment capacity of unhedged corporates [sic] and retail clients weakens." (p. 128)

The Armenian economy seems less dollarised, but, as the report notes, its real estate boom was heavily dependent on remittances. As those decrease, one would expect some impact on the currency as well.
Tweet