Is it Europe, or is it Asia? Quite literally, where is it on the map? On a rainy Saturday afternoon we took a look at online weather sites (we were looking for hope online), to check where the Caucasus ended up on alignments that cared little for political affiliations: 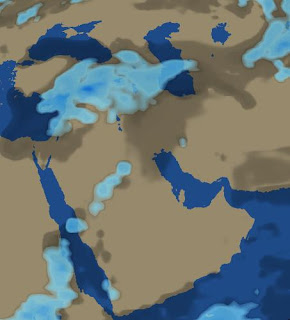 The BBC Weather Site (above) offers a new perspective: it joins the Caucasus nicely into the Middle East. Visually, at least, this makes a good unit. Black Sea, Caspian, Gulf, Arabic Sea, Red Sea, Mediterranean. Seafarers come to mind. Maybe the geographic unit can also be explained by the BBC's large audience in India and Pakistan -- Asia just needs to be disaggregated as an entity.

There is, of course, a different vision, provided by the Russian weather service:

This world-view is unlikely to be very popular in the Caucasus. The site's forecast, however, is excellent.
We also have compared forecasts. Sadly, on this, there was consensus: last weekend was rainy.
Tweet