A Love of the unknown, South Caucasians' attitudes to the EU

In May 2009 the EU launched the Eastern Partnership – the Eastern dimension of the European Neighbourhood Policy – showing its intention to cooperate more closely with the South Caucasus (SC). EU officials expressed their support for this initiative, convinced that the SC is as enthusiastic about it as they are. The data collected by the Caucasus Research Resource Centers (CRRC) show that the EU will indeed have an enthusiastic population with which to work; however they also seem to lack information about the EU.

The enthusiasm of the South Caucasus populations has been exposed by the results of a CRRC survey conducted in 2007 which revealed that, overall, 78 percent of the people in South Caucasus were in favour of economic cooperation with the EU, this percentage reaches 84 in Georgia when it remains close to 70 in Armenian and Azerbaijan. 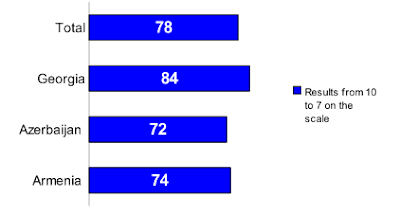 Should /country/ cooperate economically with the EU? (%) 2007 CB

The South Caucasus population is also supportive of more political cooperation with the EU (78 percent) and here again the support is more important in Georgia (85) than in Armenia (71 percent) and Azerbaijan (73). 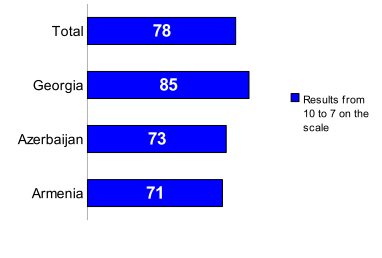 However this enthusiasm towards the EU concealed a general lack of knowledge on the subject. According to the results of the Caucasus Barometer (CB) of 2009, 33 percent of the South Caucasians polled thought that they were an EU member. In all, 48 percent in Armenia contended that their country was an EU member. The regular discussions about EU membership made by the Georgian government might help to explain the greater awareness in this country. 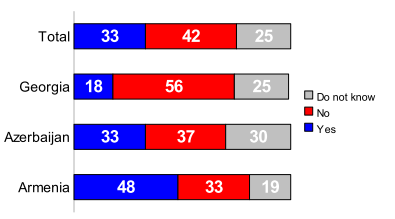 Is your country a member of the European Union? 2009 CB

Is your country currently a member of the Organization for European Development? 2009 CB

The South Caucasians themselves recognize their lack of knowledge towards the EU. Indeed, when in 2008 a CRRC survey asked in the South Caucasus: “Using this CARD, where '1' means “Nothing at all” and '10' means “A great deal”, please tell me how much do you feel you know about the European Union, its policies, its institutions?”, almost 90 percent of the respondents were located from 1 to 5 on the scale. 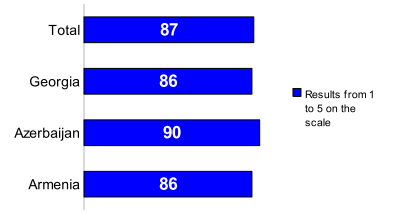 How much do you feel you know about the European Union, its policies, its institutions?” 2008 CB

On the 15th of July 2010, Catherine Ashton - High Representative of the European Union for Foreign Affairs and Security Policy - declared in Georgia that “The Eastern Partnership we established last year has given new impetus to our efforts to create the closest possible links between the EU and its Eastern neighbours. However, the CRRC data prove that the EU already has the support of the population and now it should focus on telling them what they are actually supporting. On this path, the upcoming removal of the Special Representative to South Caucasus – Peter Semneby – and the strengthening of the EU Delegations made in the framework of the European External Action Service indicate a change in EU policy in South Caucasus. Will this change be sufficient to bring the EU to the level of the South Caucasians is a major question for the future of SC-EU relations.

For all the information on the data, you can have a look at CRRC website