On July 28, 2014 charges were announced against the former Georgian president Mikheil Saakashvili concerning the abuse of power. These charges make Saakashvili the highest public official from the former UNM government to be summoned by the prosecutor’s office to date. The ruling Georgian Dream party has praised this move as proof that the judicial reforms of May 2013 have established equality before the law. However, Saakashvili has denounced the charges against him as “purely political”. CRRC data from 2013 shows that domestic belief in the impartiality of Georgia’s judicial system has been recovering since the 2012 presidential elections. However, overall confidence in court neutrality remains relatively low. An assessment of both local and international attitudes towards the impartiality of the Georgian court system is therefore key to understanding the difficulties currently faced by the prosecutor’s office. This is especially true as the office and the government alike seek to convince observers that the process of charging high-ranking ex-officials is “absolutely open”.

In 2013, just under a quarter of adult Georgians reported that courts were impartial (22%) - a level similar to previous years. In contrast, according to 45% courts favor some citizens over others (down from 55% and 53% in 2009 and 2012, respectively). More Georgians tend to think there is favoritism than those who believe citizens are treated equally before the law; the level of mistrust in the impartiality of Georgian courts is an average of 47% from 2009 to 2013, while confidence in court neutrality is an average of 18% over the same period. 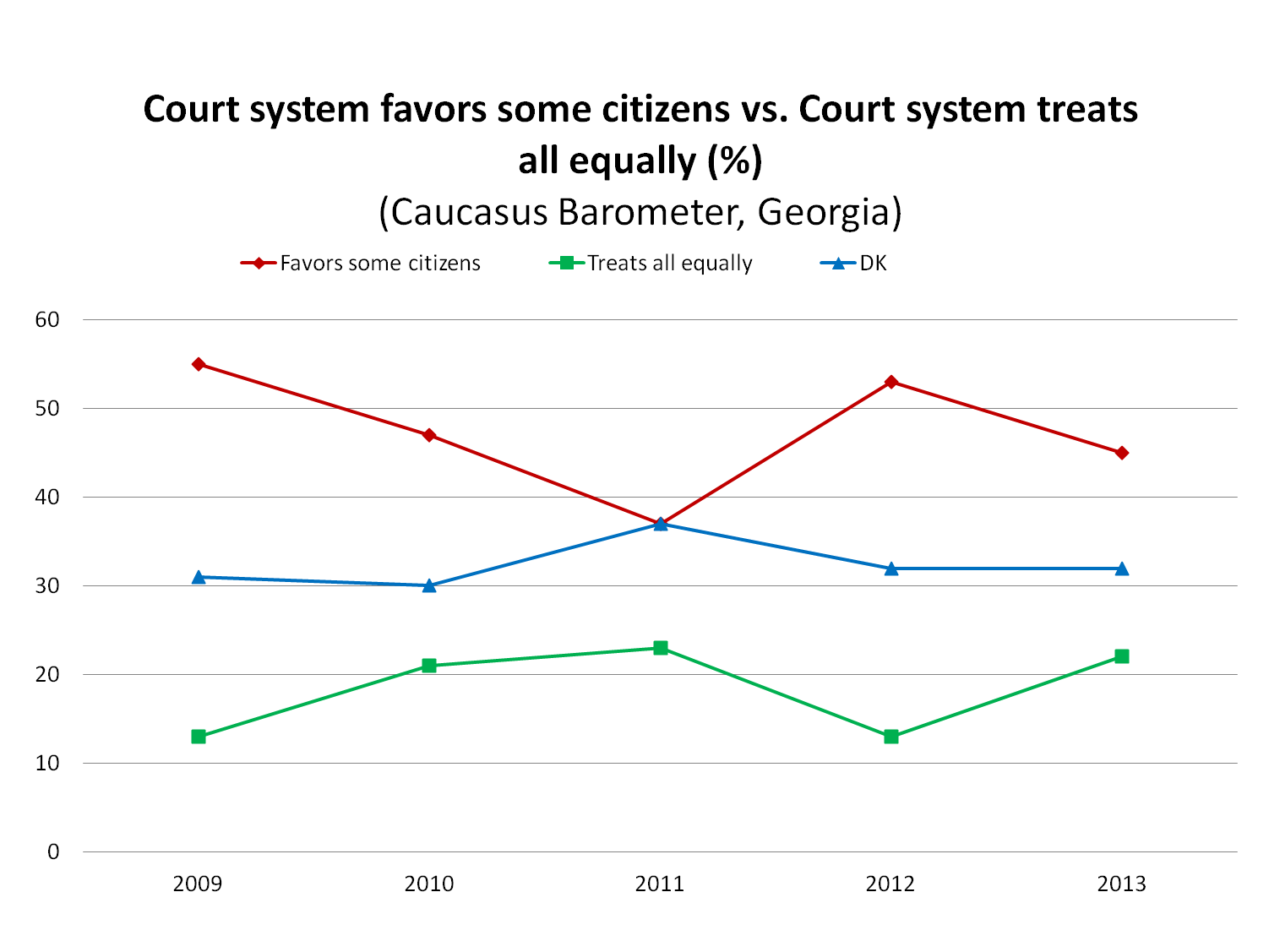 Overall, only 3% of Georgians express full trust in the court system (19% say they somewhat trust the court system), and 39% is undecided over whether to trust or distrust the system. Together with this, the ongoing lack of confidence in judicial impartiality has the potential to exacerbate inter-party disputes during a time when Georgia is faced with several recent high-profile court cases. For example, in addition to Saakashvili, the former Minister of Internal Affairs Vano Merabishvili, the former Chief Prosecutor Zurab Adeishvili, the former Defense Minister Davit Kezerashvili, the former Mayor of Tbilisi Gigi Ugulava, the former Interior Minister Bacho Akhalaia and the former Army Chief of Staff Giorgi Kalandadze have all had charges brought against them recently.

The most outspoken critic of these proceedings has been the United States, which has expressed concern about the decision to put these members of the previous government on trial. This unease has been mirrored by the EU, which has stated its intention to monitor the proceedings carefully. Several US senators have warned that these events impose “unnecessary challenges in moving [bilateral relations] forward”. The UN notes that there is a backlog of legitimate complaints from the period before the 2012 elections detailing abuses such as unfair trial, torture, ill-treatment and illegal expropriation. Yet, the UN insists that the investigation should avoid “the appearance of political retribution.”

Fears over the lack of impartiality of Georgian courts have remained high even though the prosecutor’s office invited foreign experts to Georgia earlier in July. The announcement that these experts were advising the prosecution on how to handle high-profile cases was immediately linked via local media to speculation that Saakashvili might have a case brought against him. International observers have expressed concern that the accountability of the prosecutor’s office is low and that lack of public trust is a primary concern. Thus, the charges against Saakashvili risk being interpreted as a political move regardless of the motivations behind the charges or outcome, especially since domestic and international confidence in judicial impartiality is low.

Suspicion that opposition politicians are being unfairly prosecuted would be a blow to both domestic and international trust in Georgia’s democratic processes, and could entrench the strong polarization in party politics. It is yet to be seen whether greater integration with Western institutions such as the EU will be compromised by these high-profile proceedings, or whether Georgians themselves will interpret the actions of the prosecutor’s office as impartial or political. What is clear, however, is that low trust in court neutrality poses a challenge to the stated desire of the prosecutor’s office to uphold equality before the law, especially as the process can be easily impeded by claims of partiality or the abuse of power.
Tweet