Are there ways to encourage young people to vote?

During the 2016 parliamentary election campaign in Georgia a political party released a commercial encouraging young people to participate in the upcoming elections. As the commercial claimed, in order to change the current political situation, where political parties use populist promises in an attempt to attract older, politically more active voters, younger voters need to turn up at the voting booth and have their say. However, as in 2012, a relatively small share of younger voters participated in the 2016 elections.

According to the results of the CRRC/NDI post-electoral November 2016 survey, there is a generational gap between voters in Georgia. During both the October 8 parliamentary elections and the October 30 run offs in 2016, people who were between 18 and 35 years old reported voting less than older people. 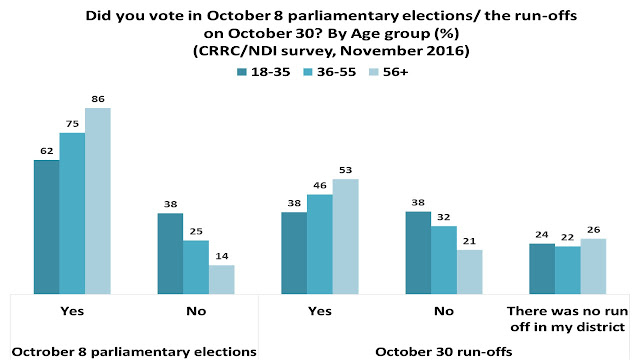 Note: In almost all countries, there is a considerable difference between self-reported voter turnout as seen in survey findings and official turnout. The most widespread explanationfor this fact is social desirability bias i.e., when respondents who did not vote are embarrassed to admit it. Thus, they report that they voted. The same difference is observed in surveys conducted in Georgia, including the CRRC/NDI post-electoral survey.


A number of surveys suggest that young people in Georgia are indifferent towards politics. For instance, those who are younger report discussing politics and current events with friends and close relatives less frequently compared to those who are older. As the chart below shows, though, the reported lack of interest in politics was not the most frequently named reason why people of any age group did not vote. Notably, voters under the age of 56 frequently reported that they were registered to vote in a different settlement than the one they live in, and could not go to their precinct on election day. 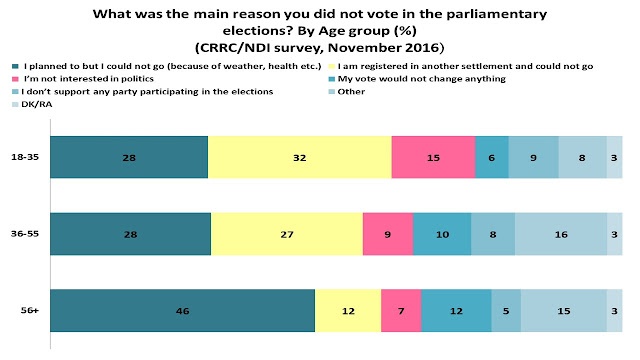 Note: The question was asked to the 23% of respondents who reported they did not vote in the October 8th parliamentary elections and the October 30th runoff. Answer options "I wasn’t registered", "I didn’t know where my polling station was", and "I couldn’t decide how to vote" were combined in the category “Other”.

A lack of interest in politics and low levels of political participation among young people is common not only in Georgia, but in many countries. A number of complex issues are believed to explain this phenomenon e.g., not having much of a stake in society or preferring other types of activities to express their political and social views. Still, the reported reasons for not voting are very similar in Georgia for young people and those who are 36 to 55 years old. Certain practical steps could help increase turnout in these age groups e.g., absentee ballots or the introduction of online voting. Importantly, as the Minister of Justice of Georgia has already noted, the country has the technical capacity to launch an online voting system. This could encourage more people to vote, and potentially not only the young ones.

What else might encourage young people to vote? Join the discussion on our Facebook or Twitter. To explore the CRRC/NDI November 2016 survey findings, visit CRRC’s Online Data Analysis portal.