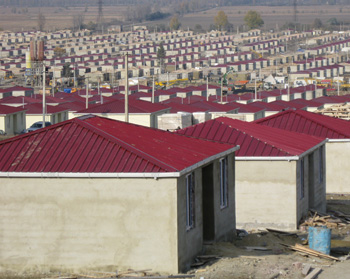 WiP: Resettlement of Internally Displaced Persons (IDPs) in Urban Areas of Georgia - A New Way of Spatial Segregation? Tbilisi, Georgia, March 13 (ENG)
CRRC, American Councils and ARISC are proud to present the 6th talk of the Works-in-Progress Series for the Spring 2013 Season!
Prof. Joseph Salukvadze and David Sichinava (Tbilisi State University)"Resettlement of Internally Displaced Persons (IDPs) in Urban Areas of Georgia - A New Way of Spatial Segregation?"
Wednesday, March 13, 2013 at 6:15pmISET/CRRC Georgia, Zandukeli St. 16, Tbilisi, GEORGIA
The presentations aims to shed light on the impact of the state program of resettlement on the lives of IDP population in Georgia and its effects on the integration of IDPs into the mainstream urban society of the country. The proposed hypothesis suggests that the artificial spatial clustering of the newly created IDP settlements, along with the collective centers created earlier, has negative consequences on the level of integration of newly relocated population. The analysis is based on the data gathered in the framework of a research project entitled “Coping with marginality – can IDP communities successfully integrate into mainstream urban societies in Georgia”, launched by the department of human geography of Tbilisi State University, supported and financed by the Academic Swiss Caucasus Network (ASCN).About the authors: Joseph Salukvadze is a full professor at Tbilisi State University. David Sichinava works for CRRC as GIS and database analyst and is a PhD candidate at the department of Human Geography at Tbilisi State University
********
W-i-P is an ongoing academic discussion series based in Tbilisi, Georgia, that takes place at the International School of Economics (ISET) building (16 Zandukeli Street). It is co-organized by the Caucasus Research Resource Centers (CRRC), the American Councils for International Education: ACTR/ACCELS, and the American Research Institute of the South Caucasus (ARISC). All of the talks are free and open to the public.The purpose of the W-i-P series is to provide support and productive criticism to those researching and developing academic projects pertaining the Caucasus region.Would you like to present at one of the W-i-P sessions? Send an e-mail to natia@crrccenters.org.
Tweet