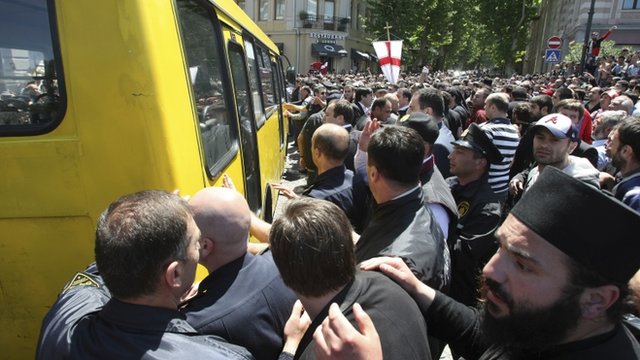 WiP: Public Opinion and the May 17th Events in Tbilisi: CRRC Survey Results, September 25 - Natia Mestvirishvili
American Councils and CRRC are proud to present the 4th talk in the Fall 2013 Works-in-Progress Series:
Natia Mestvirishvili, CRRC"Public Opinion and the May 17th Events in Tbilisi: CRRC Survey Results"
Wednesday, September 25, 2013 at 6:15pmISET/CRRC Georgia, Zandukeli St. 16, Tbilisi, GEORGIA
In late May and early June of this year, CRRC Georgia conducted a small survey among Georgian-speaking adult residents of Tbilisi regarding the events of May 17th, during which two demonstrations – one for the International Day Against Homophobia and another against homosexuality — ended with the participants of the latter violently overwhelming the participants of the former. For the first time in CRRC’s history, face-to-face interviews were conducted using computer tablets instead of paper questionnaires, resulting in 542 completed interviews through computer-assisted personal interviewing (CAPI).The survey revealed some interesting paradoxes in the opinions of Tbilisi residents: the majority of Tbilisi residents believe that democracy is preferable to other forms of government and that freedom of speech and tolerance for differing opinions are major components of democracy; at the same time, people seem to be uneasy about differing opinions with regard to the May 17th events.
Natia Mestvirishvili is the Regional Research and Outreach Coordinator at CRRC. She earned an M.Sc. in Social Research from the University of Edinburgh (UK) and a M.A. in Global Development and Social Justice from St. John’s University (US). She also holds a diploma in psychology from Tbilisi State University. Since 2012 she is ian nvited lecturer at Tbilisi State University, where she teaches several courses in research methods and psychology.
********
W-i-P is an ongoing academic discussion series based in Tbilisi, Georgia, that takes place at the International School of Economics (ISET) building (16 Zandukeli Street). It is co-organized by the Caucasus Research Resource Centers (CRRC), the American Councils for International Education: ACTR/ACCELS, and the American Research Institute of the South Caucasus (ARISC). All of the talks are free and open to the public.The purpose of the W-i-P series is to provide support and productive criticism to those researching and developing academic projects pertaining the Caucasus region.
Would you like to present at one of the W-i-P sessions? Send an e-mail to natia@crrccenters.org
Tweet