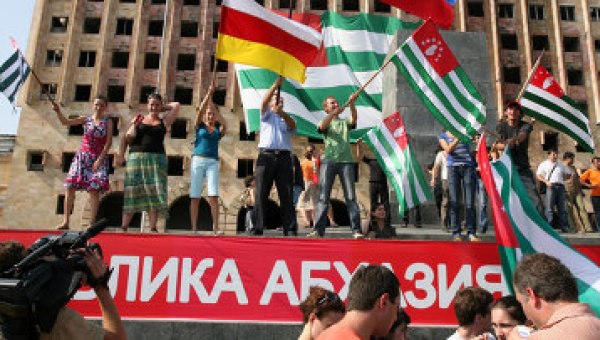 WiP: Elections in de facto states: Abkhazia, Transnistria and Nagorno-Karabakh. Tbilisi, Georgia, March 27 – Dr. Donnacha Ó Beacháin (ENG)
CRRC, American Councils and ARISC are proud to present the 8th talk of the Works-in-Progress Series for the Spring 2013 Season!
Dr. Donnacha Ó Beacháin, Dublin City University"Elections in de facto states: Abkhazia, Transnistria and Nagorno-Karabakh"
Wednesday, March 27, 2013 at 6:15pmISET/CRRC Georgia, Zandukeli St. 16, Tbilisi, GEORGIA Abstract: While the post-Soviet space contains many states that fix elections, recent elections in de facto states (2011-12) have been noteworthy for the fact that voters and analysts could not with certainty predict the outcome. Moreover, unlike many of the successor states of the USSR, Abkhazia and Transnistria have already witnessed a post-election transfer of power from government to opposition. In the small but increasing literature on de facto states the post-Soviet unrecognised states are usually examined exclusively in the realm of conflictology, international relations or geopolitics. Assessments or analyses of elections are virtually non-existent. This presentation charts the development of electoral politics in post-Soviet unrecognised or partially recognised de facto states, namely Abkhazia, Nagorno-Karabakh and Transnistria. In particular, it examines presidential elections in Abkhazia (August 2011), Transnistria (December 2011) and Nagorno-Karabakh (July 2012) with a complementary focus on parliamentary elections in Abkhazia (2012). This research provides an assessment of the dynamics of electoral politics within these three unrecognised or partially recognised post-Soviet states. The analysis is framed by scores of interviews conducted within Abkhazia, Transnistria and Nagorno-Karabakh during repeated visits throughout 2011-2012 as well as in those states from which they have separated. The presentation benefits from two major research grants awarded to Dr Ó Beacháin. During 2011-12 he was a recipient of an 18 month major research grant from the IRCHSS and Ireland’s Department of Foreign Affairs Conflict Resolution Unit to lead a research team to examine the role of the OSCE and EU in the post-Soviet protracted conflicts. In January 2012 Dr Ó Beacháin received an additional commission from the IRCHSS/Department of Foreign Affairs to conduct field research in Abkhazia and Transnistria and write two reports evaluating electoral politics in these two unrecognised states.Donnacha Ó Beacháin is a faculty member of the School of Law and Government, Dublin City University, where he lectures on post-Soviet politics and Irish foreign policy. Recent and forthcoming books include The Colour Revolutions in the Former Soviet Republics: Successes and Failures (co-editor, Routledge, 2010), Destiny of the Soldiers: Fianna Fáil, Irish Republicanism and the IRA, (Gill and Macmillan, 2011), Life in Post-Communist Eastern Europe after EU Membership (co-editor, Routledge, 2012), Political Communication in Ireland (co-editor, Liverpool University Press) and The Irish Government and the Northern Ireland Conflict: The Politics of Partition (Manchester University Press)
********
W-i-P is an ongoing academic discussion series based in Tbilisi, Georgia, that takes place at the International School of Economics (ISET) building (16 Zandukeli Street). It is co-organized by the Caucasus Research Resource Centers (CRRC), the American Councils for International Education: ACTR/ACCELS, and the American Research Institute of the South Caucasus (ARISC). All of the talks are free and open to the public.The purpose of the W-i-P series is to provide support and productive criticism to those researching and developing academic projects pertaining the Caucasus region.Would you like to present at one of the W-i-P sessions? Send an e-mail to natia@crrccenters.org.
Tweet