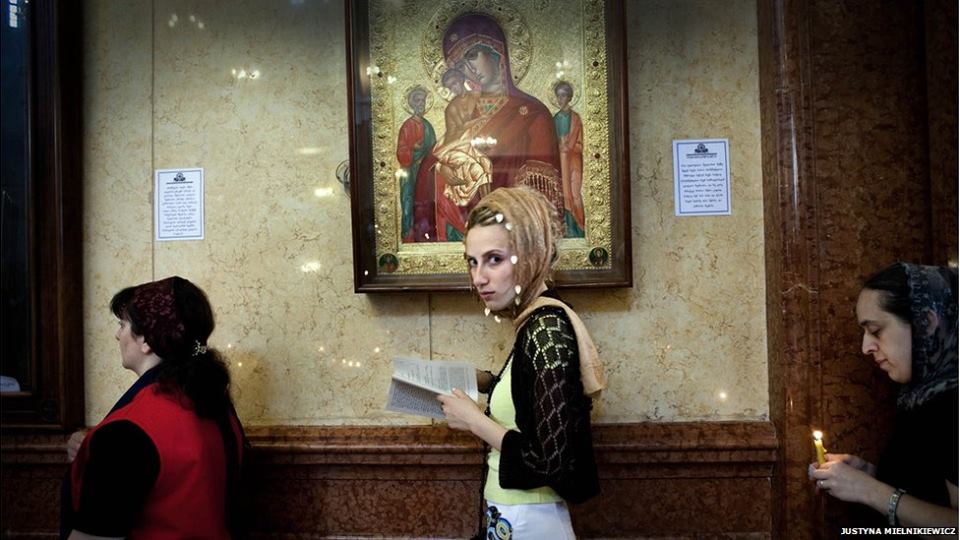 “Religiosity and/versus gender: Doing of femininity and religiosity among Orthodox women from Poland and Georgia"

The experience of women in Poland and Georgia shows that the collapse of the Soviet Union and the process of democratization are not necessarily connected with the developments in the field of gender equality and gender policies. The right wing (in Poland) and nationalist (in Georgia) backlash combined with the neoliberal discourse led to the limitation of some of women’s rights as well as to the intensification of traditional discourse, in which women are basically seen as mothers and housewives. As a result, women found themselves in a schizophrenic position between the symbolic return to the traditional role of woman and present challenges and difficulties which are related to the social, political and economic transformation.

At the same time, in neither country did this situation mobilize women to become actively engaged in activities focused on their community of interests in a broader sense. Despite the increasing number of women’s organizations in Poland and Georgia, the social understanding of gender equality is often perceived in a negative, or at least, an ambivalent way. What is more, the rise of right wing and nationalist discourse in the ’90s was connected with the revitalization of religion’s status in both societies and the resurgence of the Polish Catholic Church and the Georgian Orthodox Church in the public sphere. Therefore, the western theory of secularization which is seen as an inherent attribute of the modernization process seems not to be applicable to the history of Poland and Georgia.

The aforementioned issues led the author to conducting, in 2011 and 2012, of her master thesis research on the interplays between religiosity and gender among young women raised in the Orthodox tradition in Poland and Georgia. Using the tools of the semi - structured interviews, participant observation and comparative analysis, the research was the first attempt to explore the way of understanding and experiencing religiosity and gender of women born in the fall of the so-called “ Second World” as well as their agency in terms of postcolonial studies.

Helena Szczodry graduated with a M.A. in Sociology from the Jagiellonian University in Poland and minor in Development Studies from the Maastricht University in Netherlands. Co – editor of the book “Kobiety w społeczeństwie polskim” [Women in Polish Society] (Jagiellonian University Press 2011), co – author of the report „Qualitative assessment of social inclusion in the Małopolskie, Mazowieckie and Podkarpackie Regions: current status and good practices” (2013) and co – author of a sociological and oral history movie “The Railway Station Krasne – Busk. Stories of resettled women” (2013). She has been involved in various national and international research projects and her academic interests include gender studies, development studies and visual sociology, especially the South Caucasus area.