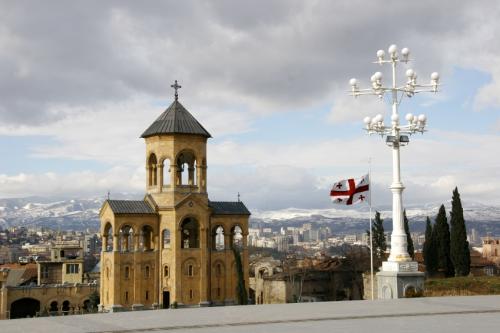 WiP: The Role of the Orthodox Church in the Formation of the Georgian Identity. Tbilisi, Georgia, March 6 (ENG)
CRRC, American Councils and ARISC are proud to present the 5th talk of the Works-in-Progress Series for the Spring 2013 Season!
Tatia Kekelia, Elene Gavashelishvili, Kote Ladaria and Irene Sulkhanishvili"The Role of the Orthodox Church in the formation of the Georgian Identity"
Wednesday, March 6, 2013 at 6:15pmISET/CRRC Georgia, Zandukeli St. 16, Tbilisi, GEORGIA A team of four PhD candidates at Ilia state university, headed by the professor Sergo Ratiani, implemented a research in the framework of the joint project of Ilia State University and Academic Swiss Caucasus Net. The research took place over the period September 2010 - September 2012. The outcome of the research is a book entitled "The Role of the Orthodox Church in the formation of the Georgian Identity" (with a special focus on the processes taking place in the 20th century and the beginning of the 21st century). The authors try to objectively describe the state of the social institutions, with special emphasis on the challenges facing these institutions today.
********
W-i-P is an ongoing academic discussion series based in Tbilisi, Georgia, that takes place at the International School of Economics (ISET) building (16 Zandukeli Street). It is co-organized by the Caucasus Research Resource Centers (CRRC), the American Councils for International Education: ACTR/ACCELS, and the American Research Institute of the South Caucasus (ARISC). All of the talks are free and open to the public.The purpose of the W-i-P series is to provide support and productive criticism to those researching and developing academic projects pertaining the Caucasus region.Would you like to present at one of the W-i-P sessions? Send an e-mail to natia@crrccenters.org.
Tweet