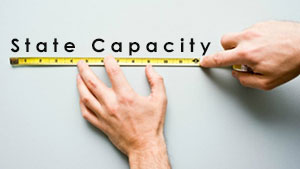 State capacity is a concept which has gained wide interest from political scientists in recent years. However, the concept continues to lack agreed upon definitions and indicators, with different authors providing different definitions more closely aligned to their chosen measurement(s) of state capacity. In part, this is due to the inherent multidimensionality of the concept, which is exemplified by the multiple sub-capacities which various authors have identified, including bureaucratic-administrative capacity, fiscal capacity, coercive capacity, and infrastructural capacity.

While capacity is important, without considering constraints on action, an understanding of state capacity is incomplete. In the Armenian and Georgian contexts opposition parties, the media, religious organizations, the non-governmental sector, and linkage and leverage with the West constrain state action. While a number of these factors have been measured in a variety of ways, many still lack clear indicators and/or have never been measured.

This talk will focus on the construct validity and practical applicability of state capacity and constraint indicators in Georgia and Armenia.

Research on the subject is part of the larger research project, Autocratic Response to Voter Preferences in Armenia and Georgia being implemented by CRRC-Georgia and CRRC-Armenia. This project aims to compare and contrast how political actors manipulate institutions in Armenia and Georgia with the goal of staying in power. Ultimately, it seeks to identify and analyze (1) the political constraints faced by the autocratic ruling party and (2) the regime’s policy responses to voter preferences as shaped by these constraints.

Dustin Gilbreath is a research consultant at CRRC-Georgia. His research interests surround the relationship between citizens and the state from anthropological and political science perspectives.